Donald Trump has started a new political party -- the Patriot Party. The good news is that he plans to run candidates to challenge Republicans Trump considers his enemies. The bad news is that some of these "Patriots" may win.
The immediate purpose of the party seems to be to put pressure on Republican senators who may be considering voting against Trump in his upcoming impeachment trial. He is also planning to run again. 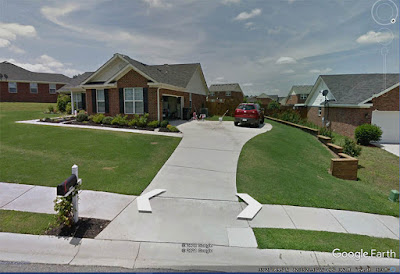 The listed headquarters of the Patriot Party is 4004 Rosedale Place, Grovetown, GA. Google Street View gives us a chance to see what Trumpism Central looks like.
Nice place! I'm being quite sincere when I say this: This is the only Trump "home" I've seen that looks like the person who lives there has good taste. If Donnie had had a hand in the decor, there would be golden Solomonic columns flanking the garage door and a fake "Renoir" hanging in the living room.
The Quest for Q: Late as I am to the party, I've become fascinated by the search for the origins of Q.  Until now, I've been hesitant to get into the weeds. Doing so requires an immersion in the culture of the image boards, or "the chans,"  and that prospect always seemed icky.
For now, let us pause to savor an irony: Q -- the alleged anti-pedophile crusader -- became famous via 4chan and 8chan, boards which have offered a home to pedophiles around the world (although 4chan now has a zero tolerance policey). See here and here and here. Jim Watkins -- the man whom many believe to be Q -- may be the best friend pedophiles ever had.

But that irony may have a darker, deeper layer: Mother Jones has uncovered that Jim Watkins, the owner of 8chan and its successor site, 8kun, controls a company that hosted scores of domains whose names suggest they are connected to child pornography.

While Mother Jones did not visit the domains because of strict laws related to viewing child sex abuse material, internet registration and hosting data suggest at a minimum that Watkins profited from domains with names explicitly related to pedophilia—the very thing that QAnon followers say that they’re motivated to end. The domains’ names include terms such as “preteen,” “schoolgirl,” and “child” alongside graphic terms for genitalia and words like “rape” and “love.” It’s unclear what, if anything, is currently being served at the domains. However, an analysis of metadata collected years ago from one by archive.org shows dozens of filenames and links containing highly suggestive terms, including “xxxpreteen,” “children,” and sexual references to girls aged 12 to 15.

Some of the domains date back to the late 1990s and may no longer be active, while others currently resolve to IP addresses controlled by Watkins’ company, N.T. Technology, according to records compiled by Farsight Security, a cybersecurity company that archives historical routing data detailing relationships among domain names, IP addresses, name servers, and other digital assets.

One domain created in 1998 and hosted by N.T. Technology, which bills itself as “a powerhouse in the internet world, [s]upporting some of the largest sites on Earth,” lists Watkins as its administrator and names a separate holding company he owns, Is It Wet Yet Inc., as the administration organization. According to historical domain and web archive records, the domain has, over the years, been associated with dozens of subdomains—more specific and focused offshoots of the main domain—whose names combine terms like “preteen,” “kidnap,” and “rape.” They include a comprehensive system of subdomains referencing age ranges as young as 10. When asked about the specific domain, Watkins said “I have really no idea about” it.

Right now, Watkins seems to be our strongest Q candidate. That said, I'm not among those willing to make the simplistic statement that Q and Watkins are one and the same.
Let's put it this way: It's fair to state that there is more than person behind the Q phenomenon, and that Watkins is undoubtedly one of those persons. Although I doubt that he has authored most of the actual Q drops, he may be most important person playing a behind-the-scenes role in the propagation of that mythos. We may compare him to David O. Selznick, who neither wrote nor directed Gone With the Wind; nevertheless, everyone refers to GWTW as a Selznick film.
Watkins is a very odd duck. Like Trump, he is one of those "poor impulse control" fellows who sometimes says more than he should. His reference to being arrested may tell us more than he intended. Speaking generally, it seems to me that a "radical free speech" advocate facing a possible kiddie porn charge could be manipulated by an intelligence agency, or by a faction thereof. Or maybe by some other parapolitical actor.
Just sayin'.
Allow me to do a little free association. There's another Trumpworld personality associated with the exploitation of children: Lebanese-American political fixer George Nader. Wonder if he and the Watkins family ever crossed paths?
It's odd that Trumpworld has such obvious overlaps with the pedophile demimonde. Yet Trump supporters accuse everyone else of being child abusers.
Although Watkinis has strong links to Japan -- and, it is said, to the Japanese far right -- the Watkins "empire" is located in the Philippines. I read Sterling Seagrave's The Marcos Dynasty a long, long time ago, so my memory is imperfect -- but as I recall, that book portrays the Philippines as a cesspool of child sexual exploitation. Maybe a reader can tell me if the situation has improved.
I'm honestly not sure where this investigative trail will lead. But if the Q folk can engage if wild conspiracy fantasias, we are justified in subjecting them to a reasonable degree of conspiracy research.
posted: 3:51 PM