(A note to my fellow Globalist Elitists: Q is the 17th letter of the alphabet, so be sure to mark down every 17th letter of this post for the Top Seekrit coded message! Of course, you won't be able to access the cleartext without the Vignere key. You do remember it, don't you?)
For a few hours there, everything was going great. Joe Biden was in the Oval Office, Satan was on his infernal throne, Trump was in Florida, and all was right with the world.
The QAnon qrowd was losing faith. In fact, many of them began to fret that the Storm would never come.

While Biden took the oath, a top post on a QAnon forum read "I don't think this is supposed to happen" and wondered, "How long does it take the fed to run up the stairs and arrest him?" 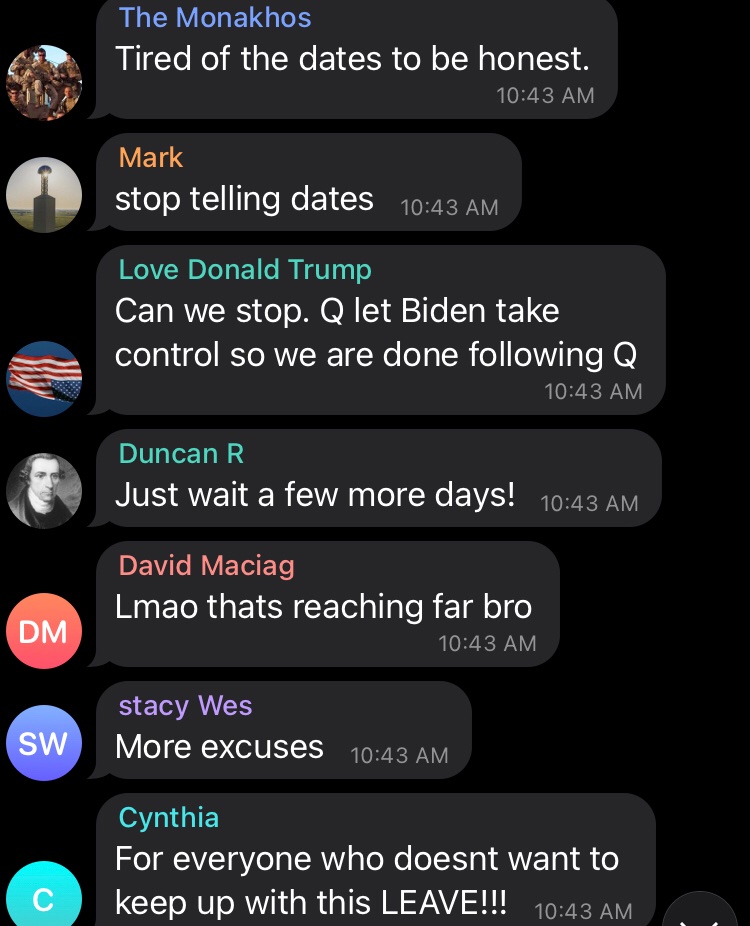 The Fed? I don't think the Federal Reserve has the power of arrest.

One of the largest QAnon groups on Telegram closed comments to let everyone "take a breather" after Biden's inauguration. When it reopened after it was accused of censorship, thousands of users expressed a range of reactions: confusion and realization that QAnon was in fact a hoax, as well as renewed commitment to the conspiracy theory, despite its unreliability.

Ron Watkins, the former administrator for the message board and QAnon hub 8kun and a major force behind false conspiracy theories surrounding the election results, seemed to capitulate, posting a note to his more than 100,000 followers: "We gave it our all. Now we need to keep our chins up and go back to our lives as best we are able."

Remember, Ronnikins is thought by some -- by many, in fact -- to be the only begotten son of Q himself. Just a few days ago, Ronnie was a die-hard True Believer. He solemnly informed us that Nancy Pelosi had been dragged off to Gitmo.
Yes, it was all going well. We had the Q folk right where we wanted them -- mired in doubt. They began to tell each other that there was no substance to all to the inane conspiracy theories they had latched onto. And then...

Then, at around 7 p.m., JFK Jr. flew down in his personal Battle Saucer -- the one bearing the ID number "PT 109-B" -- and opened fire on the White House, crying "DIE, PEDOPHILE! DIE!"
His lasers did major damage to the Truman balcony. Fortunately, he didn't know that, earlier in the day, the White House had been equipped with one of those portable black hole ray beams capable of sending the PT 109-B straight into the Upside Down.
(The portable black hole device was developed in the underground base near Tonopah, Nevada. Trump didn't know about that stuff. He was told only about Area 51, where the tech is like, so five minutes ago.)
At the time of the attack, Biden was safe in the basement of the White House, sacrificing a goat to His Infernal Majesty.
Fortunately, MSNBC and Rachel Maddow and George Soros and the all-powerful Hillary Clinton kept the whole thing out of the news. As long as the cover-up holds, we may still be able to pull this thing off.

That was close! Don't know about you, but I'm gonna chug a celebratory bottle of Adrenochrome. Mmm! It's my favorite brand: HELL'S OWN ADRENOCHROME! Now with 30 percent more Satan!
Seriously: If you think that the Q virus has been defeated, think again.

So far, no mass exodus from any of the Q channels I follow on Telegram. In fact, an account purporting to be Lin Wood (of Kraken fame) has ADDED roughly 30,000 followers since last night. An account claiming to be Sidney Powell has added roughly 8,000. 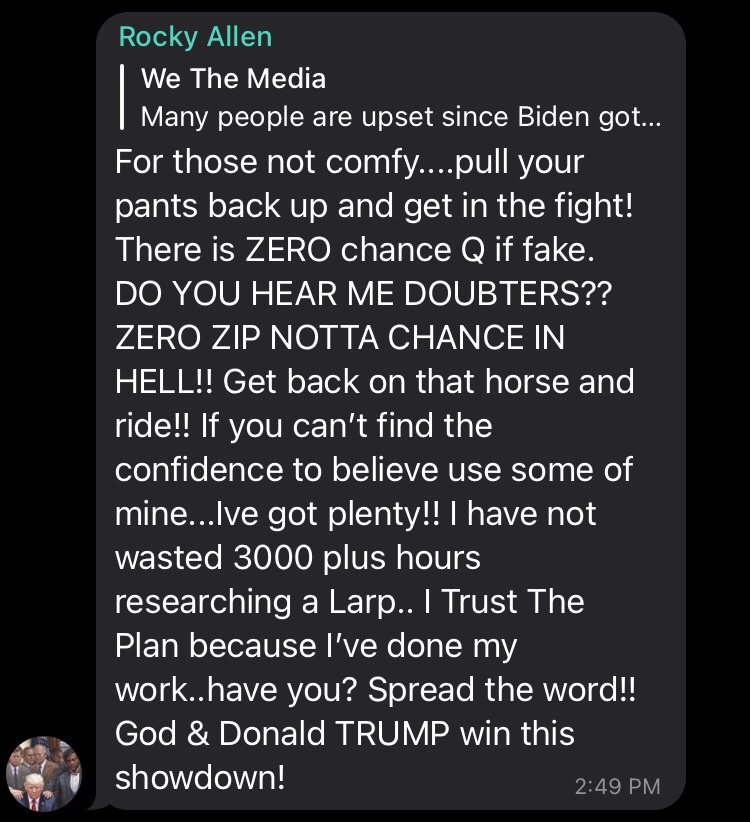