Trump's dimwit lawyer Jenna Ellis miffed many when she tweeted a meme featuring a "Theodore Roosevelt" quotation which was exposed ages ago as a fake: 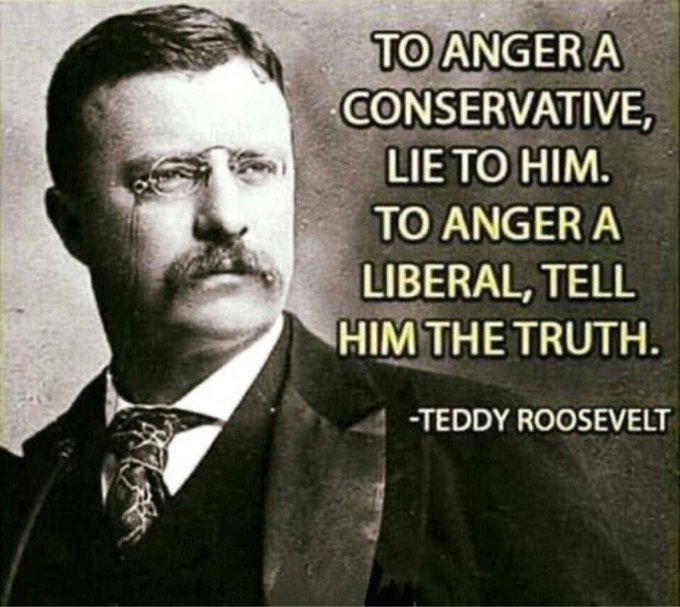 This particular example of False Quotation Syndrome proves that conservatives lie even when they say they don't like lying. I find this particular lie especially galling because it stands history on its head.
Theodore Roosevelt was a progressive. He literally founded the Progressive political party.
Unfortunately, ideologues on both the right and the left now prefer to ignore what Roosevelt stood for in 1912.
Roosevelt's party was 100 percent committed to undoing the influence of big business on politics. The Progressive platform advocated the following:
Some of these ideas seem radical even today. Nearly all are currently under attack. By 1912 standards, this platform was an astonishment.
Under no circumstance would someone like Jenna Ellis vote for a modern Teddy Roosevelt. In fact, she'd probably be spreading insane conspiracy theories about him. Teddy Roosevelt, in turn, would have despised Donald Trump, an exemplar of what T.R. called "the elite criminal class."
Can you imagine what Roosevelt would have said about Trump's alleged "bone spurs"?

THAT speech. While campaigning for president as the Progressive candidate, T.R. was shot in the chest by a mad barkeeper named Schrank. The only thing that saved Roosevelt's life was the fact that the bullet hit his eyeglass case before penetrating his flesh.
He bled heavily. Despite being seriously wounded, he insisted on delivering the hour-long speech.
That was Roosevelt. He didn't talk tough; he was tough. Roosevelt's belief in the masculine virtues may annoy some modern feminists, but his was the best form of manliness: Always brave, never brutish. A fearless adventure-seeker who constantly tested himself, he remained a gentleman and an intellectual.
(Incidentally, he raised his free-spirited daughter, "Princess Alice," to be as ornery and independent as he was. I've always wondered if she approved of the way she was portrayed in The Wind and the Lion.)
In all likelihood, you already knew that T.R. delivered a speech after being shot in the chest. But you probably have never read the words he said. A few excerpts:

I have altogether too important things to think of to feel any concern over my own death; and now I can not speak to you insincerely within five minutes of being shot. I am telling you the literal truth when I say that my concern is for many other things. It is not in the least for my own life. I want you to understand that I am ahead of the game, anyway. No man has had a happier life than I have led; a happier life in every way. I have been able to do certain things that I greatly wished to do, and I am interested in doing other things.
I can tell you with absolute truthfulness that I am very much uninterested in whether I am shot or not. It was just as when I was colonel of my regiment. I always felt that a private was to be excused for feeling at times some pangs of anxiety about his personal safety, but I can not understand a man fit to be a colonel who can pay any heed to his personal safety when he is occupied as he ought to be occupied with the absorbing desire to do his duty.

Can you imagine Trump saying that...?
Although the term "stochastic terrorism" was not used in those days, Roosevelt understood that violent language could lead to violent acts. He thus instructed his listeners not to speak ill of his party's opponents, even though they had often slandered him -- and even though that slander had motivated the assassination attempt.

Friends, I will disown and repudiate any man of my party who attacks with such foul slander and abuse any opponent of any other party...

In the first place, speaking to you here in Milwaukee, I wish to say that the Progressive Party is making its appeal to all our fellow citizens without any regard to their creed or to their birthplace. We do not regard as essential the way in which a man worships his God or as being affected by where he was born. We regard it as a matter of spirit and purpose. In New York, while I was Police Commissioner, the two men from whom I got the most assistance were Jacob Riis, who was born in Denmark, and Oliver Van Briesen, who was born in Germany - both of them as fine examples of the best and highest American citizenship as you could find in any part of this country.

I make the same appeal in our citizenship. I ask in our civic life that we in the same way pay heed only to the man's quality of citizenship, to repudiate as the worst enemy that we can have whoever tries to get us to discriminate for or against any man because of his creed or his birth-place.

Now, friends, in the same way I want our people to stand by one another without regard to differences of class or occupation. I have always stood by the labor unions.

It is essential that there should be organizations of labor. This is an era of organization. Capital organizes and therefore labor must organize.

You have labor laws here in Wisconsin, and any Chamber of Commerce will tell you that because of that fact there are industries that will not come into Wisconsin. They prefer to stay outside where they can work children of tender years, where they can work women fourteen and sixteen hours a day, where, if it is a continuous industry, they can work men twelve hours a day and seven days a week.
Now, friends, I know that you of Wisconsin would never repeal those laws even if they are to your commercial hurt, just as I am trying to get New York to adopt such laws even though it will be to New York's commercial hurt. But if possible I want to arrange it so that we can have justice without commercial hurt, and you can only get that if you have justice enforced Nationally. You won't be burdened in Wisconsin with industries not coming to the state if the same good laws are extended all over the other States. Do you see what I mean?

I want to send a message to Jenna Ellis. It's the same message I would send to the current day's leftwingers and rightwingers (some of whom, like Karl Rove, profess to revere T.R): The Theodore Roosevelt of your warped imaginations does not resemble the man himself.
In the early part of the 20th century, both major parties had wings. When T.R. was president, he represented the Republican party's left wing -- the trust-busting wing. He left the party when the party went right.
Roosevelt may be called a conservative only if we are speaking of the conservation of our natural heritage. We owe our national park system to him. If Roosevelt were alive today, he'd be the fiercest possible advocate of clean energy -- and he would be an implacable opponent of any business that hoped to exploit public lands or to pollute the environment.
In all other respects, Theodore Roosevent was a true progressive -- a friend to the immigrant, a champion of labor, an advocate of the rights of women. He was a progressive at a time when that term meant something -- a time before today's ill-read, inarticulate and ineducable Zombies for Political Correctness debased that once-noble word and transformed it into something risible.
By the way: T.R. once said: “The country will never really demonstrate that it is a democracy in the full reach and range of that conception until we have had a both a Negro and Jewish president of the United States.” We're only half-way there. One shudders to think of what the QAnon contingent -- those promoters of The Protocols -- would say about a Jewish president.
posted: 2:02 AM