This opinion piece by David Ignatius has aroused right-wing fury because it contradicts the absurd recent story about Rudy's magic computer, published in the New York Post. Although the piece is worth reading, I disagree with Ignatius on a key point:

What’s clear, beyond the false scandal-mongering, has been evident for years: Hunter Biden made a mistake getting involved with a dubious company like Burisma.

It's unpopular to say that Hunter did nothing wrong, but I'll say it anyways.
The American right keeps linking the words "Burisma" and "corruption" in order to convey the impression that we are dealing with a hellishly evil company. If you spend enough time on right-wing websites, you'll form the impression that Burisma executives kill toddlers while quaffing adrenochrome and shouting "Hail Satan!"
It may be more accurate to say that Burisma was the victim of corruption. 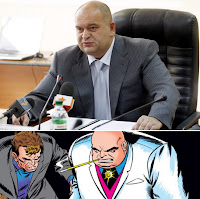 In the days when a Putin puppet ran Ukraine, a rather distasteful oligarch controlled this energy concern. His name was Mykola Zlochevsky -- and, as I never tire of pointing out, he physically resembled the Kingpin, foe to Daredevil and Spider-Man. Between 2010 and 2012, while running Burisma, Zlochevsky also served as Ukraine's Minister of Ecology and Natural Resources. As you might have guessed, his dual public/private position offered much opportunity for mischief.
In those days, corruption was indeed rampant. Millions of dollars flowed out of the company's coffers and into foreign bank accounts.
The revolution of 2014 attempted to rid Ukraine of Russian influence. Reform was in the air. Zlochevsky -- under investigation since 2012 -- was accused of "illegal self-enrichment." He had to flee.
A new crew took over day-to-day operations at Burisma. A very interesting new crew.
Few realize that this Ukrainian energy firm is now under American control. The chairman of the board is an American named Alan Apter, who joined Burisma "after a 27-year career in investment banking; including management positions at Merrill Lynch, Renaissance Capital, Troika Dialog and Morgan Stanley." That's pretty much all I know about him at the moment.
In 2017, an even more intriguing fellow became one of Burisma's directors: Former high-ranking CIA officer Joseph Cofer Black. At one point, he headed up Dubya's counterterrorism efforts. "Previously Black served in the Directorate of Operations at the Central Intelligence Agency (CIA) and Director of the CIA's Counterterrorist Center (CTC)." In the '90s, he was CIA station chief for Khartoum (doesn't that sound exotic?) and had helped to capture Carlos the Jackal.
Black led the anti-Bin Laden unit before 9/11. In fact, his unit had surveilled the hijackers and...
...oh, hell. A whole book could be written about this guy. He's very spooky. I'm surprised that the QAnon contingent hasn't yet made him the center of, like, 20,000 different conspiracy theories.
(I don't know whether his surname is Black or Cofer Black; sources differ.)
His resume includes these interesting items:

In February of 2005, Cofer Black took a vice-president position at the private military corporation, Blackwater USA.

In February of 2007, Black merged his own company, The Black Group with two others to form Total Intelligence Solutions, LLC, an commercial-inltelligence company which services are meant to "bring CIA-style intelligence services to Fortune 500" companies.

Yes, Blackwater. He was in tight with Eric fucking Prince. For a brief period, Hunter Biden worked for (or with) a Prince associate.
During his CIA career, Black displayed an attitude toward the Russians which was, shall we say, not congenial. Prince took a different path. He seems to have grown quite fond of Putin -- in fact, Prince is now employed by the Russian military. In saner times, that relationship would have been considered treasonous.
(Putin's power-play in the United States has turned many former allies into opponents. Just look at the marriage between George and Kellyanne Conway.)
Although Joseph Cofer Black has been in the public sector since 2005, many believe that a high-level CIA guy never really leaves the Agency. I won't go that far. One must be circumspect these days, because one does not want to say anything that might send the QAnoners into quivering fits of conspiragasm. I will simply say that we should keep an eye out for any information concerning a possible relationship between Burisma and CIA.
Black was the national security adviser to Mitt Romney during the 2012 campaign. There is a vague rumor in rightwingerland that Black had something to do with Romney's impeachment vote against Trump. I doubt it.
Meet the Board of Directors. In 2014 (before Black was on board), Burisma had a lot of natural gas to sell, and new markets beckoned. So it made sense for the company to try to burnish its image. Hunter Biden was a lawyer with Boies Schiller Flexner, a very fancy-schmancy law firm. (They represented the Gore campaign during the 2000 recount.) Even if Hunter Biden's last name were not famous, he was a very reasonable hire for a big energy concern looking to recover its reputation and expand operations.
For a brief period, Hunter Biden and Joseph Cofer Black were both listed as Directors of Burisma. Here's an archived image from the company's website:

Three Americans and one Pole. In charge of a Ukrainian energy firm. Interesting.

Kwaśniewski was President of Poland from 1995 to 2005. He has a wary and hostile attitude toward Putin's grand schemes, as noted in this interview. Also see this piece in the Irish Times:

Mr Kwasniewski said he was “pessimistic” regarding the situation and claimed Mr Putin would seek to destabilise Ukraine to cultivate a “special relationship” with the eastern European state. “Russia, and especially President Putin, wants to have, not only part of Ukraine, but the entire country in the zone of his influence,” said Mr Kwasniewski. “His dream, his strategy is to have Ukraine as part of a newly formed Eurasian union and, for that, he is prepared to do absolutely anything.

“The destabilisation of Ukraine is a key element of that strategy. The Russian expectation is that Ukrainians, totally frustrated, will abandon the experiment with Europe and the West, and turn to Moscow to create a special relationship with Russia. My forecast is pessimistic – we have in front of us a very long and very dramatic crisis.”

Burisma, it seems, is now a western bulwark in a land that once was part of the USSR. No wonder Putin seeks to bring down this company.
Last year, there was a concerted effort by the Russians, the Trump administration and the right-wing media to convey the impression that Hunter got some sort of bribe from Zlochevsky. Not true. Unfortunately, a smear of this sort leaves a reek even after it has been well and truly debunked. So let's be clear: The Kingpin (as I call him -- and I do hope that this nickname catches on) was out of the picture before Hunter joined.
The right also keeps claiming that Joe Biden engineered the ouster of Ukrainian prosecutor Viktor Shokin because he (Shokin) was investigating Burisma, Hunter's employer. Not true. As many journalists have pointed out, Shokin was a corrupt bastard who refused to investigate other corrupt bastards, like Zlochevsky. Everyone in the international community knew this; they all wanted Shokin gone.
We've been living with this "Burisma/Biden" smear story for more than a year now, and I still cannot understand just what it is that Hunter Biden supposedly did wrong. Even the liberal media keeps repeating the line that he should never have accepted a paycheck from the company.
Why the hell not?
If that company has in incurable case of cooties, then why doesn't anyone denounce Apter or Black? Or the former President of Poland? Don't they have cooties as well? Why hasn't anyone accused them of corruption?
More about that NY Post story. From the afore-linked WP opinion piece:

An Eastern European expert in digital forensics who has examined some of the Ukrainian documents leaked to the New York Post told me he found anomalies — such as American-style capitalization of the names of ministries — that suggest fakery.

This new evidence suggests that the fraud was perpetrated by an American. Not the Russians.
In the preceding post, we discussed a neo-Nazi who filled a pro-Trump message board with detailed forecasts of the NY Post story. This Hitler-lover knew all about the smear before it became public. He may, in fact, have been the perpetrator of the fake.
There is an enemy within.
A final word about Hunter. While researching this post, I became semi-persuaded that there is something strange -- as in spooky -- about Burisma. We can safely ignore the right's claims that Hunter was party to the Kingpin's corruption, since Hunter entered the stage after the Kingpin left. Nevertheless, there's an aspect of this tale that remains mysterious. How did these non-Ukrainians take control of the firm?
The left has occasionally criticized Joe Biden for being overly friendly to CIA. (Example.) At one time, I would have been very concerned by Biden's attitude toward Spookworld. Nowadays, not so much.
posted: 7:20 AM