When asked by reporters, Ms Harris said she believed the women who spoke out against her now-running mate.

“I believe them, and I respect them being able to tell their story and having the courage to do it,” she said.

Those words are going to be particularly hard to explain away when the October smears hit. (The Federalist uses the term "rape accusers." The word "rape" has a very elastic definition these days; see below.)

God damn but Biden made a stupid decision when he chose Kamala Harris. Seriously, what the hell was wrong with Demings? Did something come up in the vet?

Another Kamala problem: The death penalty. Leave it to Kamala Harris to stake out the perfect position -- that is, a position perfectly designed to piss off everyone on both sides of the issue. It's a complex story, and I'm too tired to summarize. Go here, then go here, then go here.

I oppose the death penalty. For that reason, I would never accept a position on a national ticket, if I were a politician. One must be mature enough to accept that certain viewpoints are so very unpopular as to be deal-breakers. The only thing worse than taking an unpopular stance is taking two directly opposed stances, as Harris has done.

The best argument in Harris' favor I've seen is here.


Harris’s presence on the ticket is a daily invitation to the president to go Full Trump. Which would only hurt him more with suburban voters.

Speaking of smears... I don't know where Christo Grozev found this. I can't even be sure that it is real. But it's funny.

Basically, Grozev (who is, um, kinda spooky) has been investigating Russian troll operations, which are always in need of English-speakers who can pass as Americans. Grozev writes:


I have to share this gem with you. As part of the recruitment of new fake Americans, Prigozhin's state-funded Troll Farm asks job applicants to write an essay describing their would-be-American life. 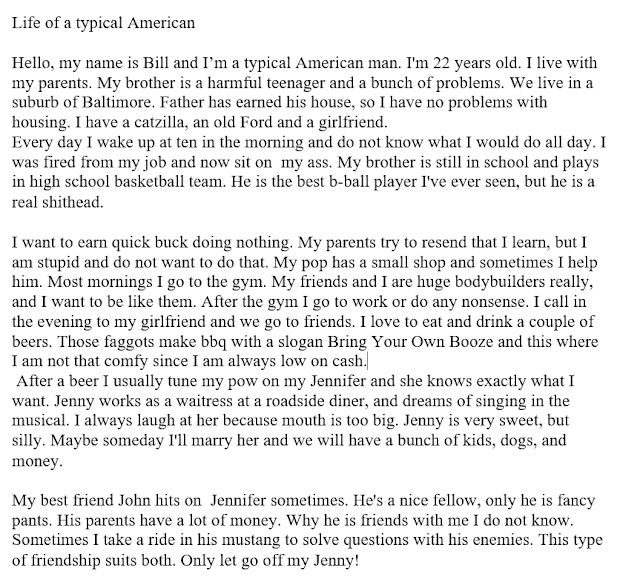 That's Bawlmer, all right. Guys around here are always trying to tune their pow on their Jennifers.

May I try out for this gig?

"This morning I put flamingo on lawn but flamingo is purple because Ravens are purple color. Ravens are being popular sports team for Baltimore people who see sports. Ravens sports team invented by American poet Edgar Allenovitch Poe."

By the way: Prighozhin is the oligarch known as "Putin's chef" because, years ago, he ran a restaurant favored by bad Vlad.

Another Epstein liar. When, oh when are journalists going to apply some critical thinking skills -- or at least some everyday Google skills -- to the claims made by the growing number of "Epstein girls"? I draw your attention to one Chauntae Davies, who was well into her 20s when she hooked up with Epstein. She now claims that she was his "sex slave." She also says that Epstein raped her repeatedly.


Davies said Epstein raped her the third or fourth time they met on the island and it continued for several years.

She described how she spent two weeks 'vomiting myself to death' in a hospital after being raped by him.

'He took me by the wrist. I was searching for words but all I could say was please stop, but that only seemed to excite him more,' she said.


Despite the alleged rapes, she kept seeing Epstein for three years. She lived apart from him quite independently, and she flew out to see him when he offered money. Nevertheless, she insists that she was a slave -- and she wants us to feel sorry for her.

At least, that's the story she's telling now. But back in 2015, she told a very different story to Inside Edition.


Davies worked as a masseuse on board the plane and said she never had sex with Epstein.

INSIDE EDITION’s Jim Moret asked her, “Did you ever think that maybe more was going on than simple massages?”

“Looking back, of course,” she replied.


(Emphasis added.) I assume that apologists will offer the usual drivel about trauma and recovered memory. I heard that one a lot back when I was researching SRA claims.

Here's another theory: Maybe Chauntae was a hooker. Or maybe she was a legitimate masseuse who wasn't entirely repulsed by the proverbial "happy ending." Maybe she did what she did willingly. Maybe she enjoyed the jet set lifestyle. Maybe she didn't mind massaging Epstein because (as Patterson's book Filthy Rich makes clear) Epstein had a degree of erectile dysfunction and generally finished himself off. Maybe she thought: "Easy money -- and not too icky, as these things go."

And maybe Chauntae belatedly realized that she could claim a chunk of Epstein's fortune -- or at least get paid for interviews -- if she assumed "sex slave" status. Since she could not plausibly assert that she was underaged, she -- like the notorious liar Sarah Ransome -- decided to cry rape.

It's just a theory. I don't claim to have proof. But I do think it fair to ask: If she really was raped, why did she keep flying out to see her rapist (even after that vomitous hospital stay, for which she undoubtedly has documentation)?

There is a photo -- innocuous -- of Bill Clinton with Chauntae. I wonder if she will now "remember" being raped by Clinton? Some girls will remember all sorts of things, for the right price. Ask Jacob Wohl.
posted: 11:34 PM