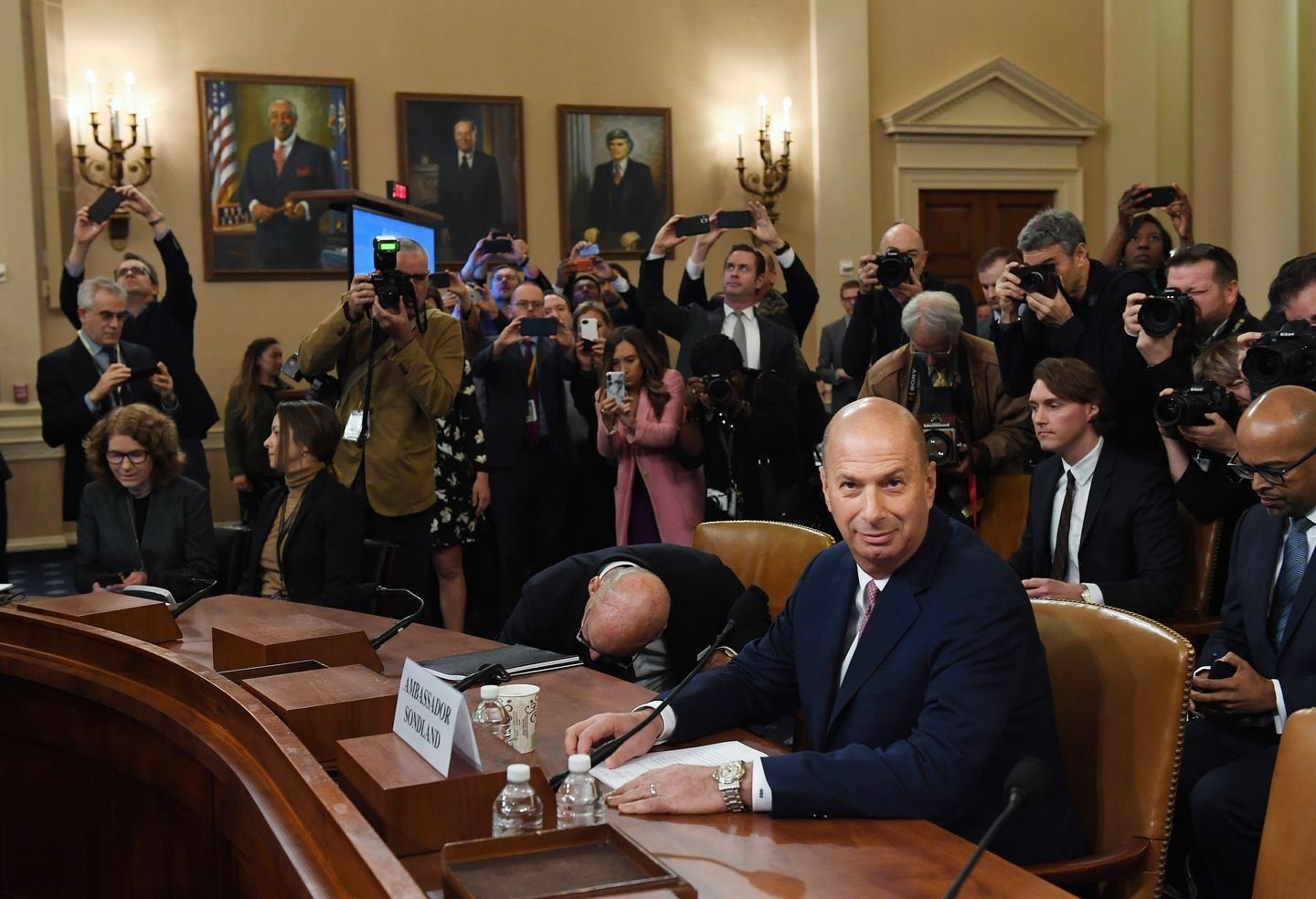 What a photo! WHAT A PHOTO! If there were a thought balloon over Sondland's head, what words would fill it? Perhaps Roger Ebert's immortal line: "This is MY happening and it FREAKS ME OUT!"

Trump has nothing. Trump still relies on a "I want nothing" "No quid pro quo" defense, even though Sondland came right out and said that a quid pro quo did, in fact, exist. I'm sure you've seen this photo already... Like everyone else, I thought that this image had to be 'shopped. Nope. It's fer reals. Trump is relying on the original message Sondland sent to Bill Taylor -- after making Taylor wait hours for a response. The following tweets tell the real story:

It's important to note the timing of Trump's "I want nothing..I want no quid pro quo" statement to Sondland: It occurred on September 9, the exact same day the House Intel Committee received the whistleblower's complaint....
— Matt Lewis (@mattklewis) November 20, 2019

Trump, for the record, once the plot has been exposed: "I WANT NOTHING! I WANT NOTHING!
Trump to Zelensky, July 25, as the plot is underway and the screws are being tightened: "I would like you to do us a favor though."
— Bill Kristol (@BillKristol) November 20, 2019


Remember, Team Trump knew all about the whistleblower fairly early on. Before telling what he knew to the Inspector General, the Whistleblower relayed his concerns to CIA's general counsel Courtney Simmons Elwood. She told all to Barr, who -- predictably -- sat on his hands. No doubt Barr informed Trump. The timing is difficult for me to pin down, but it appears that Elwood informed the White House in early August, certainly before August 12.

The fact that Trump continued his Ukrainian shennanigans after that time speaks volumes about the man's hubris. But that's just what he did.

September 9 is when Schiff told the public that he knew about the Whistleblower complaint and that he intended to pursue the matter. In other words, as that day progressed -- during those all-important five hours of Trumpian silence -- Trump finally had to face the fact that the cat had well and truly scratched its way out of the bag.

And look at what else happened on that date:

Taylor texts Sondland again about the idea that the military aid is being withheld in some kind of quid pro quo. "As I said on the phone, I think it's crazy to withhold security assistance for help with a political campaign," Taylor says.

Sondland speaks with Trump via phone and then responds to Taylor's [+.text] "Bill, I believe you are incorrect about President Trump's intentions. The President has been crystal clear no quid pro quo's of any kind. The President is trying to evaluate whether Ukraine is truly going to adopt the transparency and reforms that President Zelensky promised during his campaign I suggest we stop the back and forth by text If you still have concerns I recommend you give Lisa Kenna or S a call to discuss them directly. Thanks." Sondland will later explain that he was simply relaying Trump's denial, rather than vouching for it.


That denial -- on that date -- is the only argument Trump has left.

In that text to Sondland, Trump spoke words of faux-innocence only after he finally understood that the jig was up.

Remember when Nixon said "But it would be wrong" when he suddenly recalled that the mics were hot?

Is Pompeo running toward the exit? This story has been floating around all day. At first, I simply could not believe it. But it's looking more possible as the day wears on.


Donald Trump’s secretary of state has reportedly told three prominent Republicans that he is planning to resign from the White House to run for a Senate seat.

Mike Pompeo had planned to stay at the State Department until early spring 2020 but he is now concerned that his connection to Mr Trump, particularly through the impeachment inquiry, is hurting his reputation, according to a Time report.

The Republicans quoted in the piece reportedly include a former Trump administration employee and another who remains in the government, while the third has served in several high-ranking posts.


The former employee could be Bannon. He's blabby. I don't have any particularly interesting guesses as to the other two sources.

Pompeo is quitting because Trump makes him look bad? Oh boy. A Pompeo exit makes Trump look bad to his base. Of course, Pompeo was part of the "drug deal" all along.


The disclosures link Mr. Pompeo more directly to the Trump administration’s pressure campaign on Ukraine. It is not clear how specific Mr. Sondland, the ambassador to the European Union, was in his communications with Mr. Pompeo about what was being asked of the Ukrainians.

That leaves Pompeo some wriggle room, but not much. We should let him wriggle completely free -- if he squeals on Trump.

The possibility of a Pompeo exit, coupled with Ken Starr's turnabout, may signal that the not-so-good ship Trump has finally docked at the rat-disembarkation point. Until now, I have not contemplated the possibility that the Republicans in the Senate might actually abandon Trump. For a born pessimist like me, it is the height of bad taste to get one's hopes up. But if Pompeo goes...jeez, who knows?

Trump may have the proverbial ace up his sleeve. He knows the dirty secrets of the Republican party -- specifically, he knows about the history of Republican vote-rigging schemes. For fifteen years, I have written about election manipulation, a topic which mainstream political writers avoid. (They do take the idea seriously in private discourse, but only an impudent outsider would dare to say "It's real!" in public. I'm pretty impudent.) If Trump goes down, he may bring the whole filthy enterprise down with him.


The incorrect story, first disseminated by the finance blog ZeroHedge, claimed that Mykola Zlochevsky, the head of Burisma, a Ukrainian energy company, had been indicted over money laundering related to the Biden family. Hunter Biden, son of former Vice President Joe Biden, was previously on Burisma’s board of directors.

In fact, there was no announcement of an indictment.

Nina Jankowicz, a disinformation researcher for the The Wilson Center and a former adviser to Ukraine’s foreign ministry, told NBC News that claims of a new indictment appear to be a misinterpretation of a press conference related to an already existing corruption probe.

“There’s been an investigation into Burisma for a long time,” Jankowicz said. “The allegations are about corruption with Burisma’s head, which have been well known for a long time.”

As I said in an earlier post, Zlochevsky left Burisma before Biden was hired. When the Trumpers try to link the words "Burisma" and "corruption," they are trying to blind you to the real problem: Zlochevsky robbed his own company. After his ouster, Hunter Biden, who works for a very posh law firm, was hired to polish the company's tarnished reputation.

Hunter did nothing wrong.

Neither, so far as I can tell, did anyone at Burisma not named Zlochevsky. So far, it seems to me that Burisma was the victim, not the perpetrator, of corruption -- just as Hunter Biden is the victim of a smear.

If there were any evidence against Hunter Biden, the Russians and the Trumpers would not make shit up.