Simply withholding congressional aid -- for any reason -- is, in and of itself, an impeachable offense.

Here's the law. The law that Trump broke. 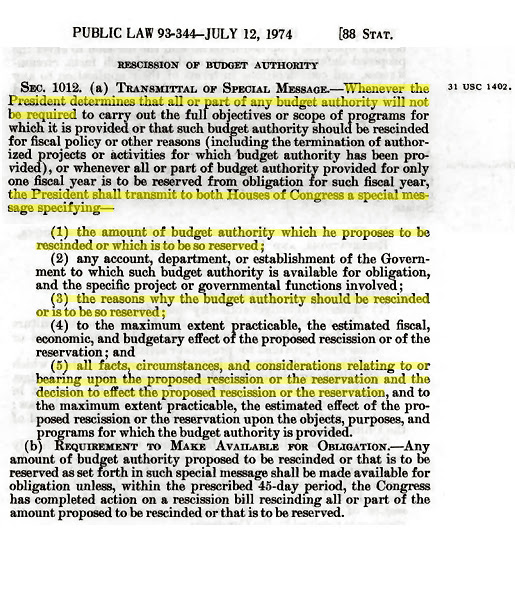 Never forget that there is only one reason why the aid was finally released: Trump was caught.

Conspiracy theory is a tool used by actual conspirators. As I write, Fiona Hill and David Holmes are testifying. Fiona Hill's purpose is to make clear that the GOP narrative -- that Ukraine did something wrong during our 2016 election -- is pure fantasy.


"Based on questions and statements I have heard, some of you on this committee appear to believe that Russia and its security services did not conduct a campaign against our country — and that perhaps, somehow, for some reason, Ukraine did," Hill said. "This is a fictional narrative that has been perpetrated and propagated by the Russian security services themselves."

Nevertheless, the Fox News-watchers will buy into any ridiculous story that Trump and the Russians decide to push. I cringe to think of the inane narratives the righties will construct around Fiona Hill. She speaks with a British accent, so I imagine they'll find some way to blame her for the Amritsar massacre and the sinking of the Lusitania.

It all goes to illustrate a point that I've been trying to make for decades now: Even when conspiracy theories are demonstrably false, they are not mere exercises in fantasy. Often, they do not arise spontaneously; they don't make themselves. They are created and lovingly shaped by malign actors.

We can, should and must recognize two realities: 1. Conspiracy theories are toxic. 2. Some conspiracies are quite real.

Both things can be true. Points 1 and 2 are not in conflict.

Russian media manipulation is a real conspiracy, yet the Russians continually push false conspiracy theories. Fox News pushes paranoia and deliberately deceptive narratives -- yet Fox itself operates in a way which can fairly be described as conspiratorial.

The Third Reich pushed The Protocols and other hideously false conspiracy theories about Jews, yet the Nazis themselves came to power by way of conspiratorial practice. The Nuremberg Trial volumes are titled Nazi Conspiracy and Aggression, and those transcripts prove that organized plotters can make a whole lotta history. Fascism is defined by a love for absurd and gaudy conspiracy theory combined with the ruthless enactment of actual complots

In that light, I'd like to point you to a fascinating bit of background info on Devin MOOnes. This anecdote demonstrates that the public -- which rightly senses that something is askew -- can easily be manipulated into blaming the wrong parties.

This may surprise people who only know Devin Nunes’s recent record, but in late 2015 Nunes told me during a long interview in his office that he was extremely concerned about the rise of conspiracy theorists in the Republican Party: pic.twitter.com/24k0np4dp7
— Ryan Lizza (@RyanLizza) November 20, 2019


This bit of history proves that Nunes is now being quite disingenuous. He doesn't really believe what he's saying; he lives in a world where one profits by demonstrating one's willingness to lie. The American intelligence community spent much of the 1990s conducting studies of human gullibility. They traced how rumors are spread, and how little "evidence" is required to create deeply-held beliefs. We are now seeing the practical results of that research.
posted: 10:59 AM