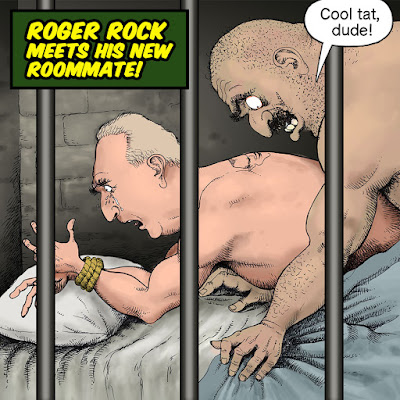 The above is a sequel, of sorts, to this mini-comic. I haven't drawn a cartoon in a couple of years, so bear with me if I'm a little rusty.

Guilty on all seven counts! Even the ones I thought he might beat! Damn, but I was not expecting this outcome.

I think I know why Stone was found guilty on all counts even though Manafort received a split decision: Stone threatened a guy's cute little dog. Jurors really don't like it when you threaten a dog.

Yes, this cartoon is a tad brutal. No, I will not apologize. He who disheth out brutality, receiveth brutality.

Rejoice! A villain has faced justice. The Stoney one will probably be pardoned, but not until after the election of 2020 -- giving Roger plenty of time to gain a full appreciation of his new home.

I should have some observations about the Yovanovitch testimony soon. In the meantime, consider this article, in which we learn that Twitter was suddenly and swiftly inundated with the phrase "I hired Donald Trump to fire people like Yovanovich." The people who spew this hatred can't really tell you why they hate this woman: They hate only because they have been told to hate.

In truth, the "people" tweeting this tweet are not really people:


The way the phrase has spread does not appear to be completely authentic. At least 7,320 tweets (including retweets) were posted that included the words posted in the first 45 minutes, according to an analysis conducted by BuzzFeed News. Within that time period, 83 accounts tweeted or retweeted the phrase over 10 times each.

Not "completely authentic"? Ya think?


Separating bot activity from genuine virality — particularly among pro-Trump social media users, who often operate in ways that look like bots — is difficult. Benchmarks vary, but, according to the Oxford Internet Institute’s Computational Propaganda team and the Atlantic Council’s Digital Forensic Research Lab, tweeting 50–72 times a day is suspicious, and tweeting more than 144 times a day is very suspicious. The rate of posts from many accounts amplifying the anti-Yovanovitch phrase is consistent with automated services.

Of course it's bogus. Let's not be naive. The bot response to Yovanovich, in and of itself, proves Russia's complicity in electing Trump.

Or does Trump have a scheme to blame this one on Ukraine as well?
posted: 5:10 PM