The quasi-divine Fiona Hill strongly rebuked the "Ukraine did it" theory of the great DNC hack. She said it was a Russian disinformation plot. The U.S. intelligence community makes the same argument.


In a briefing that closely aligned with Dr. Hill’s testimony, American intelligence officials informed senators and their aides in recent weeks that Russia had engaged in a yearslong campaign to essentially frame Ukraine as responsible for Moscow’s own hacking of the 2016 election, according to three American officials.

You really must read this thread by reporter Nicole Perlroth, which offers an up-close-and-personal of this particular made-in-Moscow conspiracy theory. As absurd and surreal as this theory is, millions of Americans will accept as gospel, simply because they allow Trump and Fox to define permissible thought.

The words below the asterisks were written by Perlroth. Her piece is brief; I will return when she is done.


Nearly a decade ago, I joined the NYTimes as a cybersecurity reporter. I was leaving my first RSA conference to visit some friends in LA and took the last remaining middle seat on a Southwest flight from SFO-LA. I was seated between two strangers.

Within 10 minutes, the three of us were buddies. For an hour, they coached me through a break-up, shared the story of their own marriages, talked about how much they loved their families and our country. We didn't even know each other's names.

As we started to descend, I asked them what they were doing in SF. They said they'd just been at the RSA conference to launch their new start-up. They told me it was going to help save the country. I told them I'd also been at a conference and told them my name. They gasped.

The two strangers I'd just spent an hour talking to were George Kurtz, Crowdstrike's co-founder, and his sales exec, Stephan Barnes. Barnes spent the rest of the flight telling me Crowdstrike's tech was going to kick China out of American networks for good, and save America's IP.

I'd heard that before. But Barnes was genuine. He meant it. We exchanged contact info and said our goodbyes. Occasionally "Barnesy" would drop me a message out of the blue: "Hey there, middle seat!" He never once pitched me, just wanted to make sure I over my breakup.

Barnes died in December 2016. I know he was proud of the work Crowdstrike was doing, rooting Russia out of the DNC's network. Every time this crazy conspiracy theory comes up, I think of him and his wife and kids and it makes me ill.

Crowdstrike doesn't need me to defend it. It's a publicly traded American company with a $12B market cap. But just to give you a sense of how absurd Trump's theory is, Kurtz is American and his co-founder @DAlperovitch was born in Moscow. There is no "wealthy Ukrainian." 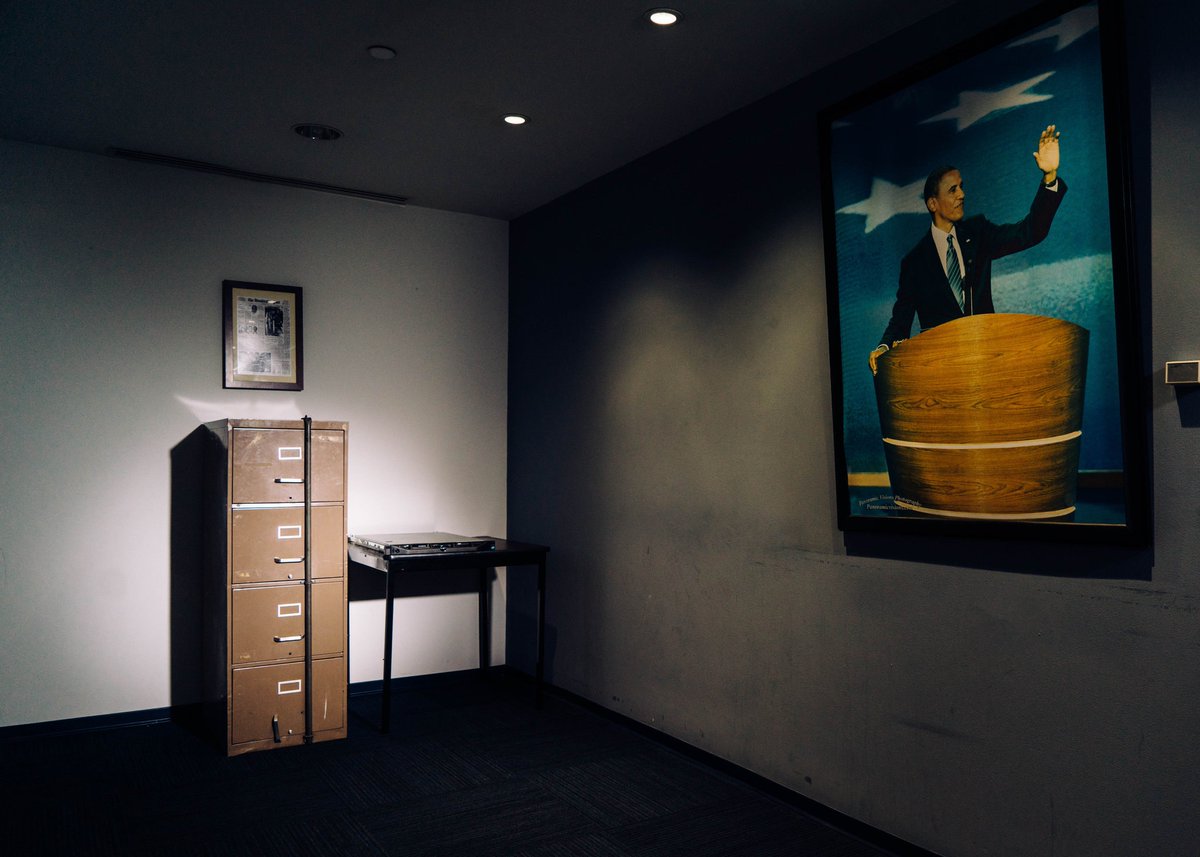 The server isn't in Ukraine. It's here, in this photo, right next to the Watergate cabinet in the DNC's basement. Lest anyone take this as further proof of some conspiracy, know that one of Crowdstrike's other big clients is the Republican campaign arm, the NRCC.

Enough is enough. Every reporter or human with any shred of human dignity needs to shut this one down at every opportunity. When @foxandfriends leaves it at "Are you sure that's true?" you're doing Putin's bidding. The end. PS: This thread is dedicated to Window Seat.

Cannon here. Now let's turn to Virginia Heffernan, about whom I have said some harsh words in previous posts, mostly because she said harsh words about Bill Clinton. (It was the usual feminist manipulative guilt-mongering neo-Puritan claptrap: Him fuck! Him bad! Monica, therefore Juanita, therefore Epstein's island!) Nevertheless, I love what she has to say here.

The fact that Trump tried to shake down Ukraine to advance a “domestic political errand” is impeachable—but also obscures something even darker: He was on orders from Moscow.


The link goes to this AP story. My gut tells me that this is pretty damned important.


The Trump administration is withholding more than $100 million in U.S. military assistance to Lebanon that has been approved by Congress and is favored by his national security team, an assertion of executive control of foreign aid that is similar to the delay in support for Ukraine at the center of the impeachment inquiry.

He must be taking this extraordinary step for a reason. Somehow -- in some way that we mere mortals cannot yet comprehend -- he must profit from this move, either personally or politically. There can be no other reason for him to do such a thing. As noted in a previous post, holding funds appropriated by Congress is, in and of itself, against the law.


The White House and the Office of Management and Budget have declined to comment on the matter.

The $105 million in Foreign Military Funding for the Lebanese Armed Forces has languished for months, awaiting approval from the Office of Management and Budget despite congressional approval, an early September notification to lawmakers that it would be spent and overwhelming support for it from the Pentagon, State Department and National Security Council.

OMB means Mulvaney. He and Trump are co-conspirators in this.

Could Trump be placating Irsael, not (as Heffernan suggests) Moscow?


There is opposition to aid to the Lebanese army from outside the NSC. Pro-Israel hawks in Congress have long sought to de-fund the Lebanese military, arguing that it has been compromised by Hezbollah, which the U.S. designates as a “foreign terrorist organization.”

But the Pentagon and State Department reject that view, saying the army is the only independent Lebanese institution capable of resisting Hezbollah.


My provisional theory -- and it's so very provisional that I reserve the right to change it within the next ten minutes -- is that Israeli spies have cooked up "evidence" to aid the Barr/Durham probe, which is predicted to hit on December 9.
posted: 2:25 AM