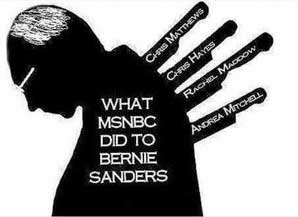 The image to your left deliberately mirrors a reactionary graphic that circulated after Vietnam. I recall it well, although I can't find an example online. (The WWI version is here.)

Apparently, this image has deep and profound meaning for the BernieBullies. My god -- do these clownish cultists actually think that MSNBC has given Bernie Sanders insufficiently respectful treatment?

For many months, MSNBC has stood for Master Sanders Needs Bootlicking and Compliance. The so-called "liberal" network has offered no substantive discussion of the problems outlined in my piece "50 Reasons why Sanders would lose all 50 states." Yet the BernieBullies complain that the network's fellation of Dear Leader has not gone all the way down to the root: "I wanna hear CHOKING sounds! I wanna see pubic hair in your TEETH!"

The BernieBully attacks on Rachel Maddow have been particularly obnoxious, and have carried more than a whiff of misogyny.

In this stab-in-the-back image, two names are conspicuous by their absence: Not even the most brain-dead Berner could make the case that Joe Scarborough and Mika Brzezinski have not been fighting on behalf of Dear Leader.

If Bernie is running to Hillary's left, why is he endorsed by Scarborough -- MSNBC's very own Republican -- and the proud daughter of Zbigniew "worse-than-Kissinger" Brezinksi? If I were running for the Democratic nomination, I'd rather have Rachel Maddow and Chris Hayes on my side.

The BernOut movement have tossed the "Establishment shill" canard at Paul Krugman, Jerry Brown, Al Franken, Rachel Maddow, Chris Hayes, Planned Parenthood and Elizabeth Warren. Actual BernieBully quote on Warren: "Next time Warren runs for office, whatever that office may be, let's not forget how she didn't stand up for the progressive candidate during this election when it counted." (The same BernieBully then suggested raising money for her foes.)

Meanwhile, who has been helping Bernie? Well, we have the asshole pseudoliberals who conspired to give us Dubya: Michael Moore, Tom Tomorrow, Ralph Nader, Maureen Dowd. I'll say it again: Whenever you see a movement that assails Paul Krugman while applauding Dowd, vote the other way.

Notice to Michael Moore: I ain't paying money for your movies if you keep working for the Republicans -- Dubya 2000, Trump 2016. You're the "sicko," bub -- and the name of your sickness is Clinton Derangement Syndrome.

Did Sanders supporters steal ballot boxes? The Hill published a remarkable story on the Puerto Rico election (which Hillary won in a landslide)...


The head of the Democratic Party of Puerto Rico slammed the Sanders campaign on Saturday for accusing it of unfairly denying poll workers access to prisons to help inmates vote.

"I am appalled at the remarks from the spokesperson of the Bernie Sanders Campaign in Puerto Rico, Ms. Betsy Franceschini," local Democratic Party president Roberto Prats said in a statement.

Franceschini had accused party officials in Puerto Rico of witholding certifications from Sanders officials, initially preventing them from organizing voters in prisons.

"The claim that the Democratic Party is delaying the certification of the Sanders' poll workers is preposterous. The first complete set of pollworkers for tomorrow's primary we have certified were all from the Sander's Campaign."

Prats also said that certifying poll workers is out of the hands of the party and that the Sanders campaign did not allow much time before they began accusing the party of fraud.

"Inmate voting is handled not by the Democratic Party but by the Commonwealth's Absentee and Advance Vote Administrative Board," Prats said. "I have been told that the Sanders campaign submitted their prison pollworker list at 6:10 pm on the evening prior to inmate voting and began complaining early in the following morning that the Board had not completed their pollworker's certification. But in the end, despite the late submittal, the Sanders campaign had representatives at the prison voting places."

He also accused the Sanders campaign of stealing two boxes of ballots that had been cast by prisoners before delivering them to an election office.


Classic Bernie! The Sanders campaign commits election fraud, and they cover their tracks with bombastic and baseless accusation that Sanders was slighted. We've seen this before, when Team Sanders stole confidential voter data from the Hillary campaign. When the theft was discovered, Sanders -- in what we now know to be a characteristic move -- went into high dudgeon, claiming that the DNC was trying to suppress him. What more evidence do we need? Bernie Sanders is one devious sunvabitch.

Here's another telling exchange with one of Bernies' deranged cultists: 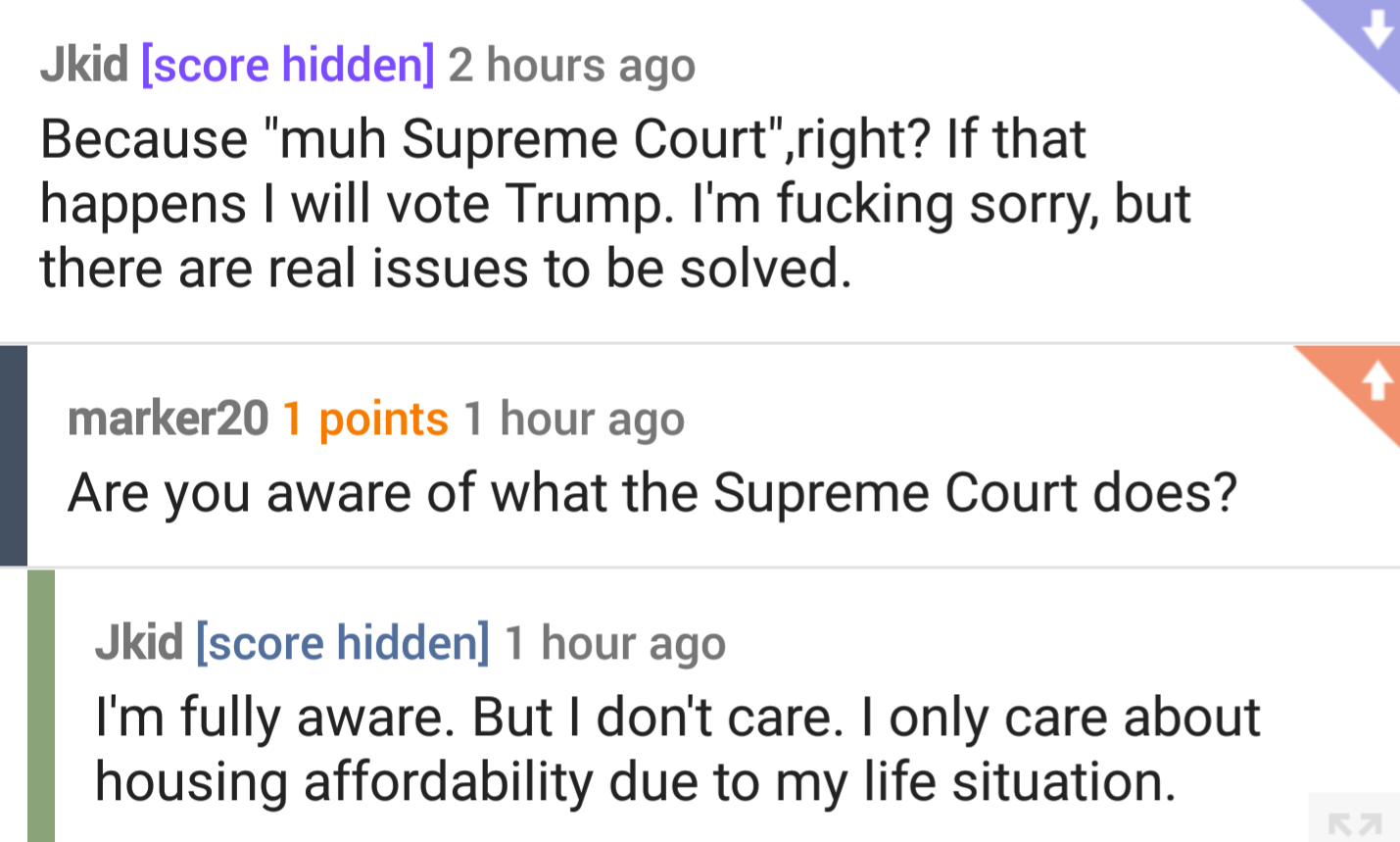 Erect and engorged: Sasha Stone has written a remarkably good piece which deserves to be read in full. I can't resist quoting a few choice bits:


The famously obstinate and “holier than thou” temperament Sanders projected was off-putting to his colleagues. Well, to most of them. Not, as it turns out, to an ally who is now the sole focus of his ire — Hillary Clinton. Clinton was a Senator who COULD work with everyone, and still does. As fellow senators, they were on cordial terms, voting along the same lines 93% of the time. They remained friends for over a decade — until the pain of losing to his former colleague became too much for Sanders to bear.

All the same, it must have irked Sanders that this woman who had gained prominence as the wife of Bill Clinton rose so fast to be elected Senator from New York and then swiftly proceeded to get things done. She was only in the Senate for two terms, but she accomplished more in that time than Sanders had done during twice as many years in D.C. He would claim that’s because she’s “establishment” — he’d say they’re all establishment, everyone but him. Yes, they are. That’s our government. That’s how it was designed in the Constitution. Three branches, very much established. You can lay blame or credit for solidifying that establishment on FDR, who was as establishment as they come. (You, Senator Sanders, are no FDR).

Precisely. I wish I had enough spit in my guts to drench the faces of all the ill-read dolts who claim that Bernie is the new FDR. No. He's not. He's the new incarnation of those fools who repeatedly called FDR a capitalist tool. The "democratic socialists" of FDR's day wanted the Republicans to win, on the grounds that worsening conditions might speed along their sick dreams of revolution.


Like Trump, whose entire campaign has been based on four catch-phrase words: Make America Great Again, the Sanders campaign latched onto a few key terms that are easy to chant: Oligarchy, Billionaires, Wall Street, Goldman Sachs. He cleverly distinguished himself from Clinton and other Democrats by making them not Trump, the enemy. Essentially trying to equate Democrats with the GOP. In consequence, Hillary Clinton came to represent, to Bernie’s followers, all those things that he railed against — he did his best to depict her as the walking embodiment of everything wrong with America.

Because the Clinton campaign was taken aback by Bernie Sanders’ “artful smear” that quickly turned into a full-blown campaign of destruction, and because her long-term goal was party unity, she avoided branding Sanders with insidious words meant to injure. Her supporters would not stoop to the level of Trump supporters or, as it turned out, Bernie supporters to match insult for insult. Just as Trump has “Crooked Hillary,” Bernie stans have labels like $hillary or Hildebeast. As of now, the only thing that really separates your average Bernie supporter from your average Trump supporter is one word: Benghazi.

Though it will take some time for his most rabid supporters to be deprogrammed, what will finally stand as the biggest stain on the Sanders legacy is the way he directly tried to undermine Clinton on the same day she went after Donald Trump most forcefully — in what will certainly be remembered not only as her best speech to date, but probably among the best political speeches ever given.

You see, for Bernie, it’s still all about Bernie. It’s still about a god’s rise. He can’t accept Hillary’s rise and triumph — even if his denial risks the fate of the country. Has any politician in recent memory ever abandoned so much to achieve so little?

The old Bernie many of us once respected is gone. He doesn’t exist anymore and maybe he never did. After all, in the end, men are men. White male rage has been awakened on both the right and the left — it is erect, it is engorged, and it is now seeking release.