You may be expecting me to eulogize Muhammed Ali. This blog usually stays away from eulogies -- and besides, others can speak of Muhammed Ali far better than I. (This piece does a good job.) But his name did come up in these pages before -- mostly in relation to a couple of stories I had written about Al Sharpton.

Although Ali's death prompted me to revisit that research trail, this post is not about him. It would be more accurate to say that this story is about Sharpton. But on a deeper level, it's about something much larger.

Before you get to the end, you should be able to guess the true reason for this post.

We will begin our journey by repeating an earlier story. In 2008, Al Sharpton was making Bill Clinton out to be the worst racist since George Lincoln Rockwell...


Why is Al Sharpton saying these ridiculous things? It's his job. Let's review some history that has been swept under the rug.

In an earlier post, we discussed a book called Overworld, by Larry Kolb. Kolb is the son of a CIA officer who was tasked by Agency luminary Miles Copeland to charm his way into the entourage of none other than Muhammad Ali. (Ali's enormous popularity in the Islamic world made him a useful ally.)

Kolb wasn't the only one in that entourage with an agenda: Al Sharpton did everything he could to get close to Ali.

Reverend Al was just Reverend Al. Around so much of the time, and usually so quiet you barely even noticed when he was there and when he wasn't.

Then one afternoon I was in the Soup Burg on Madison Avenue at 73rd...reading the sports section of New York Newsday I'd found on my stool when I sat down. And when I finished with the sports and flipped the paper over tot he front page, there was a big black-and-white photograph of Reverend Al looking shifty and a huge headline: THE MINISTER AND THE FEDS.

Under that, I read: "For the last five years, the Rev. Al Sharpton, Jr., one of the city's most vocal and visible black activists, has been secretly supplying federal law enforcement agencies with information on boxing promoter Don King, reputed organized crime leaders and black leaders and elected officials, according to sources. And in a two-hour, wide-ranging interview with New York Newsday, Sharpton, 33, said he carried concealed microphones in briefcases and accompanied undercover federal agents wearing body recorders to meetings with various subjects of federal investigations. He also allowed the U.S. attorney's office for the Eastern District of New York to install a tapped telephone in his Brooklyn home."

Al Fuckin' Sharpton, I thought in surprise as I stared into his face. I should've known. Al Sharpton! Muhammad had always said the government had someone spying on him or, as he liked to put it, that there was a "nigger in the woodpile."

Not exactly the way I'd phrase it. But I do think this story belongs on the internet record somewhere, since Wikipedia's entry on Sharpton makes no mention of this Newsday interview.

So why was Al Sharpton spying on behalf of Uncle Sam? Simple: Federal agents compromised Sharpton during a cocaine bust in 1983.

Sharpton got into this mess through his friendship with boxing promoter Don King, a longtime friend of his. Franzese, a former Colombo family captain, alleges that a South American drug dealer looking to launder money through boxing promotions approached him. According to Franzese, Sharpton was going to arrange a meeting between the dealer and King.

On the tape, Sharpton is clearly heard accepting an offer of $35,000 as his cut on the coke deal. He did not know that the South American drug lord offering this business proposition was actually FBI agent Victor Quintana.

And that's also why you don't hear much about Al Sharpton and the FBI on the teevee. If Sharpton weren't working for Uncle, you know damned well you'd never see his face on the tube. Even the right-wingers never mention Sharpton's work as an informant -- and they almost never bring up the drug bust, because they can't say much about that incident without mentioning his subsequent career undercover.

(Incidentally, Sharpton and his enterprises also owe about $1.5 million in taxes and penalties. Remember that episode of The Simpsons in which Homer went undercover after being nabbed by the IRS?)

So keep Sharpton's past in mind when you see him get on TV and say inane things about Bill Clinton. Sharpton is just a talking doll. Someone else is pulling the string.


A lot of other writers have raised suspicions about Sharpton, but I don't think that many other bloggers have talked about just what it was that made him so easy to blackmail.

In that 2008 piece, I said "someone else is pulling the string." I can now name the string-puller: Roger Stone, the sleazy dirty trickster who is going to make his long-time friend Donald Trump president of the United States. Stone was...


....the organizer of the 2000 Brooks Brothers riot, where a group of republican operatives stopped a Miami Dade vote count that was going in Gore’s favor, then a consultant on various sundry candidates, including Al Sharpton, Tom Golisano and Larry Klayman.

(Side note: In a sense, Klayman gave us the Hillary Clinton email scandal, at least indirectly. Her alternative email system was set up to allow her to communicate with Sidney Blumenthal and Tyler Drumheller without being forced to share everything with Klayman.)

In the past, I've cited this Pando story. It bears repeating.


Sort of like how Vermont front-runner in 2004, Howard Dean, was finished off by the one-two of Dean’s screechy “woo!” gesture, and Al Sharpton accusing Dean of being anti-black during the debates.

As it turns out, Al Sharpton entered the 2004 Democratic primaries on the payroll and orders of Roger Stone, who directed Sharpton’s attacks from the race politics-left against Howard Dean. And as the New York Times revealed that year, it was Donald Trump who took credit for introducing Al Sharpton — a one-time FBI informant — to his old friend and lobbyist, GOP dirty trickster Roger Stone.

In early 2004, with former Vermont governor and articulate antiwar candidate Howard Dean electrifying Democrats and antiwar voters and posing a potentially deadly threat to the Bush campaign, Roger Stone secretly funded and staffed Al Sharpton, and sent him into the Democratic Party primaries to smear Howard Dean and suck the life and joy out of his campaign. It worked.


While Bush forces like the Club for Growth were buying ads in Iowa assailing then front-runner Howard Dean, Sharpton took center stage at a debate confronting Dean about the absence of blacks in his Vermont cabinet. Stone told the Times that he “helped set the tone and direction” of the Dean attacks, while Charles Halloran, the Sharpton campaign manager installed by Stone, supplied the research. While other Democratic opponents were also attacking Dean, none did it on the advice of a consultant who's worked in every GOP presidential campaign since his involvement in the Watergate scandals of 1972, including all of the Bush family campaigns.

The Times quoted Trump in 2004 taking credit for introducing Al Sharpton to Roger Stone. But it was Barrett’s merciless reporting on Sharpton’s “blackface bucks”—the legions of race-baiting Republicans who donated cash and resources to Sharpton’s anti-Howard Dean run—that is something worth re-reading today...


Wayne Barrett would also document a second prominent time when Stone would use a candidate for divisive purposes, and this would be Al Sharpton in the 2004 Democratic primaries. “Sleeping With the GOP: A Bush Covert Operative Takes Over Al Sharpton’s Campaign” would detail how Stone would provide loans and staff for Sharpton’s campaign, with the intent to divide the democrats in 2004 as they had been in 1972. While the Club for Growth bought ads against Howard Dean in Iowa, Sharpton would attack Dean for the lack of black men and women in his Vermont cabinet. It was just like in 1972, when black protesters had suddenly shown up outside Edmund Muskie’s hotel room, demanding why he had ruled out the possibility of a black vice president. A member of the Nixon CREEP committee, Donald Segretti, would later take credit for that. “Top level consideration should be given to ways and means to promote, assist, and fund a Fourth Party candidacy of the Left Democrats and/or the Black Democrats,” wrote a Nixon strategist and speechwriter in 1972. “There is nothing that can so advance the President’s chances for reelection – not a trip to China, not four and a half per cent unemployment – as a realistic black…campaign.” That Nixon strategist was Pat Buchanan, before he himself became a third party threat to conservative voter unity213.

The desire to support and fund the creation of a fourth party, one led either by Eugene McCarthy or one with black candidates catering specifically to a black demographic, for the express purpose of splitting the Democratic vote, is made explicit in the tapes of the Nixon White House, a plan approved by the then president himself.

And now we journey into the heart of Mordor. The following quote comes from Stone's unpublished autobiography.

What you are about to read may be the most important words you will read this election season.

My goal is to ensure that the reader approaches politics with an educated, skeptical and more jaundiced vies after reading this book. In the world of politics, not everything is as it seems.

Can you now guess the real subject of today's post? 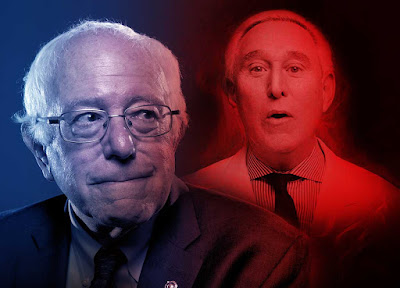