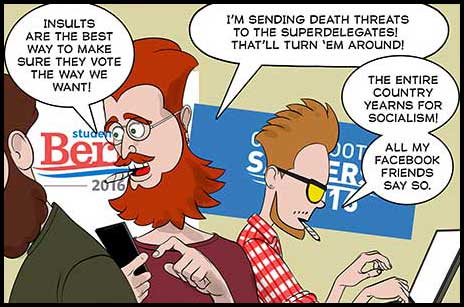 If you're H.A. Goodman (Libertarian ratfucker posing as the King of the Bonkers Berniebots), today must be bitter.


Clinton, whose first quest for the Democratic nomination ended in a concession speech almost exactly eight years ago to the day, now becomes the first woman ever to win the nomination of a major political party in the United States.

Clinton reached the majority of 2,383 delegates with a combination of pledged and unpledged "super delegates." The new tally includes pledges from over a dozen new superdelegates as well as her accumulation of 36 pledged delegates in Sunday's Puerto Rico primary.

To paraphrase a classic political jibe which you may have read about in history books:


The BernieBots are now saying -- get this -- that the AP has lost all credibility and has become part of the all-pervasive Evil Clinton Conspiracy. Previously, they said the same of Jerry Brown, Barbara Boxer, Paul Krugman, Al Franken and Elizabeth Warren. They even said that about MSNBC, even though the network hates Clinton. I guess MSNBC didn't hate her enough.

Very soon, they will argue that Reality Itself has lost all credibility. Toke up, bros.

(Meanwhile, the Berners consider Jeff Weaver and Lord H.A. H.A. to be the Credibility Kids.)

California. I just read a Kos thread in which one BernieBot said that he was considering supporting Hillary in the general election until "this AP thing" left a bad taste in his mouth. It appears that many delusional Bernie cultists seriously believe that the Evil Clinton Conspiracy controls Associated Press.

But even if that were the case, why would the ECC want AP to run that story now? That decision will depress Hillary's vote totals in California, while motivating outraged BernieBots. If anything, AP has insured a Sanders win in my home state.

Supers. Naturally, the BernieBullies are going to insist that Hillary won because the superdelegate system is inherently undemocratic -- a hilariously hypocritical claim. Did not Bernie make a very earnest pitch for the same supers that just now pledged for Hillary? At this moment, does he not rest his entire fucking campaign on the premise that the supers should overturn the expressed will of the voters? And is it not the case that caucuses, which are even more undemocratic, gave Bernie the early wins that established his momentum?

Jonathan Chait offers a marvelous look at the delusions of the BernieBullies -- and of Bernie himself:


The system isn’t rigged. Clinton is going to win the nomination because she has won far more votes. She currently leads with 55 percent of the total vote to 43 percent. That’s fairly close for a primary, but it’s not Bush-versus-Gore close. It’s not even Bush-versus-Dukakis close (the 1988 election, widely seen as a landslide, was settled by less than 8 percent). Clinton’s lead in pledged delegates is proportionally smaller than her lead in total votes because Sanders has benefited from low-turnout caucuses. Yet Sanders has enjoyed astonishing success at framing his narrative of the primary as a contest that, in some form or fashion, has been stolen from its rightful winner. His version of events has bled into the popular culture and fueled disillusionment among his supporters.

1. The early Clinton states were "confederate" southern states. The Sandernistas tried to portray Hillary as someone who appeals only to conservatives. The problem with this framing is that Clinton won by appealing to black Democrats, among the most reliably liberal.

2. Bernie won the majority of states. Actually, he didn't. More importantly, he won less-populated states. If "number of states won" were the metric, then the GOP would have a hammerlock on the White House.


I like the way Chait phrased that last bit. I'm glad that journalists are now allowed to use the word "bullshit," because there is no other way to describe Bernie Sanders.

Ratfucking, anyone? For further confirmation of my theory that that the BernieBro movement is a typical Roger Stone "Split the Dems" production, check out the reaction of the Bros over on the Sanders for President Reddit thread... 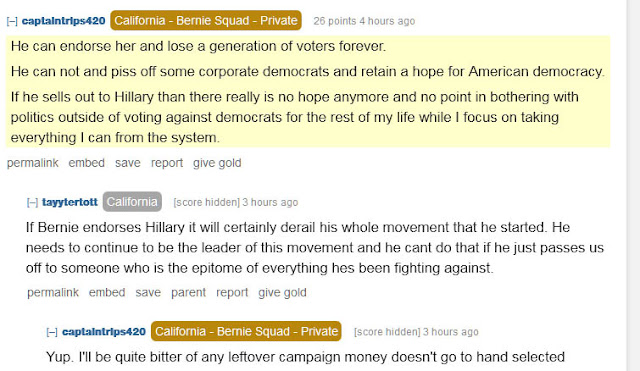 And so on. What particularly amuses me here is that the most prominent voice within this thread named himself after the original Captain Trips, Al Hubbard. Guess what? Hubbard was a secret CIA agent, boys and girls! And I would not be surprised to learn that "captaintrips420" has a similar covert side.

(I seem to be the only one to note that Lord H.A. H.A. himself used to work for an intelligence agency before he became a Rand Paul supporter. And yet this obvious ratfucker believes that he has the right to define the word "progressive" for folks like you and me.)

From the Boston Herald:


But at the end of the day, it may be Sanders who has done more harm to the Democratic Party than the nameless elites who write the obscure rules that govern the primary election process.

Duh. That was the point. The entire Sanders campaign was focused on destroying the Democratic party.

Bernie never actually wanted to be president. His movement is fake. He was working all along for Roger Stone, who never misses a trick when it comes to exploiting fractures within the Dems. If we could see Bernie's taxes, we'd spot the secret that rendered him susceptible to blackmail.

Plenty of precedent. Do any of you recall the "Hate Pelosi" movement that took over all of the liberal websites not long after Nancy Pelosi became Speaker? When Pelosi said that impeachment of Dubya was "off the table," hyperbolic anti-Pelosi vitriol blanketed the comments section of Blogistan Left. Funny thing: A surprising number of those haters said that the best way to send a message to "corporate Dems" was to vote the straight Republican ticket.

I'm not kidding. They actually said that. Vote Republican to protest the lack of impeachment proceedings against Bush. And if you couldn't actually bring yourself to vote GOP, you were instructed to give up on the political process altogether.

Could the ratfucking be more obvious? The tactic used then is the same tactic we're seeing right now. Yet young dimwits keep falling for these Stone-age ploys.

Not for the first time, and not for the last, I give you the words of Roger Stone, God-King of the Ratfuckers, written for the intro to his unpublished autobiography:

My goal is to ensure that the reader approaches politics with an educated, skeptical and more jaundiced vies after reading this book. In the world of politics, not everything is as it seems.