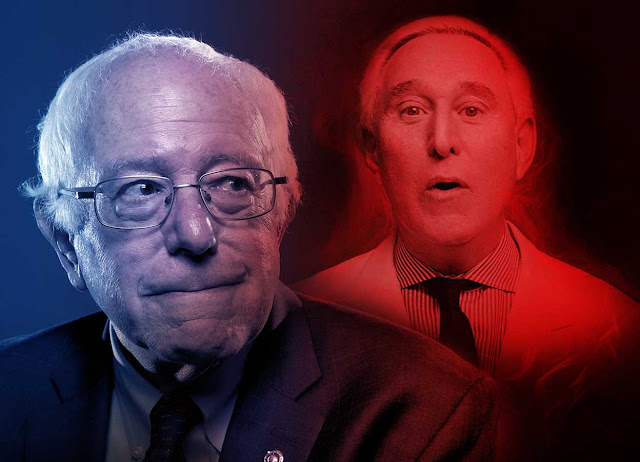 Politico offers a clickbait pictorial of the 16 worst political dirty tricks of all time, and it's definitely worth a look. What Politico doesn't tell you is that several of those "tricks" bear the mark of Roger Stone, the man now seeking to cap off his career by oozing Donald Trump into the Oval Office.

In fact, pretty much all of the other tricks could fit into the Stone playbook.

There are a few good articles about Stone that you can find on the internet. There is also a quasi-legendary piece by Jacob Weisberg which seems to have disappeared completely. If you can find it, you're a God Among Researchers. Until it turns up, I direct your attention to work of Toobin and Labash.

Even if you've already read all of that, the real truth about Stone goes far deeper than you know.

If you feel brave enough to take a course in Advanced Stone Studies, you should look at a long investigation published on a little-known blog called I Talk You Bored. The unknown author of this site offers the equivalent of a book-length biography of Stone -- replete with copious footnotes and documentation.

For me, at least, that piece is anything but boring.

(The author is also a Twin Peaks fan. I like this guy.)

This investigation contains a gruesome recounting of the work done by Stone's associates on Carl Paladino's 2010 NY gubernatorial campaign. Interestingly, that election has given rise to a lawsuit in which Stone is named...


Even by the detestable norms of New York politics, the election mailer that arrived in thousands of area mailboxes back in 2010 was grotesque.

Disguised as a "sexual predator alert," it described Warren Redlich, then a Libertarian Party candidate for governor, as "a sick twisted pervert" who "defends sex with children."

"If you encounter this man, proceed with caution," the mailer said. "If you see this man near a public school, call the police."

The claims had no basis in truth and, as you might imagine, they didn't go over well in the Redlich home.

Ancient history? Not quite.

Last month, a New York City judge ruled the lawsuit could go to trial, while observing that "politics is too often a dirty business" and that, if true, the action by Stone, Caputo and Paladino was "reprehensible."

Stone is ... well, how exactly do I describe Roger Stone? A book wouldn't do the subject justice.

He's a self-described political dirty trickster who's been doing just that since the Nixon administration. He typically works for conservative candidates, but not always. He advised Al Sharpton's brief presidential run, for example.

Ah, but why did Stone push Sharpton into that race?

We've known for a while that Al Sharpton is quite compromised. Larry Kolb's book Overworld offers some interesting insights into the man. (See here.)


Wayne Barrett would also document a second prominent time when Stone would use a candidate for divisive purposes, and this would be Al Sharpton in the 2004 Democratic primaries. “Sleeping With the GOP: A Bush Covert Operative Takes Over Al Sharpton’s Campaign” would detail how Stone would provide loans and staff for Sharpton’s campaign, with the intent to divide the democrats in 2004 as they had been in 1972. While the Club for Growth bought ads against Howard Dean in Iowa, Sharpton would attack Dean for the lack of black men and women in his Vermont cabinet. It was just like in 1972, when black protesters had suddenly shown up outside Edmund Muskie’s hotel room, demanding why he had ruled out the possibility of a black vice president. A member of the Nixon CREEP committee, Donald Segretti, would later take credit for that. “Top level consideration should be given to ways and means to promote, assist, and fund a Fourth Party candidacy of the Left Democrats and/or the Black Democrats,” wrote a Nixon strategist and speechwriter in 1972. “There is nothing that can so advance the President’s chances for reelection – not a trip to China, not four and a half per cent unemployment – as a realistic black…campaign.” That Nixon strategist was Pat Buchanan, before he himself became a third party threat to conservative voter unity213.

The desire to support and fund the creation of a fourth party, one led either by Eugene McCarthy or one with black candidates catering specifically to a black demographic, for the express purpose of splitting the Democratic vote, is made explicit in the tapes of the Nixon White House, a plan approved by the then president himself.

What's past is present.

I have given you just one indication -- one among many -- of why I suspect that Roger Stone is the secret power behind Bernie Sanders. Bernie himself may not be aware of what's going on. But if you read the above-linked bio of Roger Stone, as well as the pieces by Toobin and Labash, you will know.