God, I just want this election to be OVER. Fire up the cryo-chamber and stuff me inside. Steve Rogers and Philip J. Fry had the right idea. Let's skip the campaigning and debating and voting and go straight to the part where we all spew hate at whoever wins.

Is that too much to ask for?

This humble blog will offer a proper political post later today, but right now, we need a break. Here's a secret: When not blabbing about world events, this humble blog's humble proprietor participates in a forum devoted to the joys and mysteries of oil painting. In this installment, we discuss the various blue pigments made available to Ingres in his later years. He lived a long time, and his blue options expanded as the 19th century progressed.

One of the participants in that thread noted that it is possible to create a blue in the mind of the percipient which does not exist in reality. He proved the point with the image embedded above.

I know that the eye surrounded by red looks blue, but it isn't. Believe it or not, both eyes are the exact same shade of grey.

I'll prove it. In the modified version of the image below, I've desaturated only the red channel; nothing else about this image has been modified in any way.

I suppose one could use this demonstration to cobble together some kind of political metaphor: A large sea of red makes a tiny island of non-red seem very, very blue -- even when it isn't. Something something non-Republican in Alabama yada yada yada. Feel free to work out your own wording. As noted above, I don't wanna think about politics right now, because it's a lot more fun to research Ingres and How He Diddit.

We'll get back to the awful hideous stupid agonizing 2016 campaign later today. 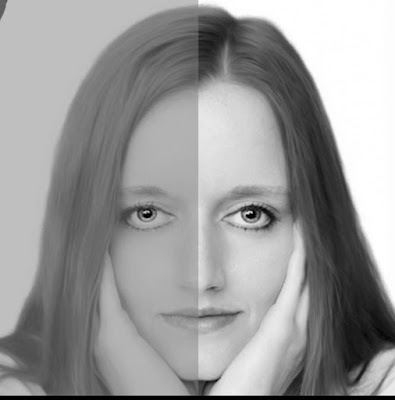