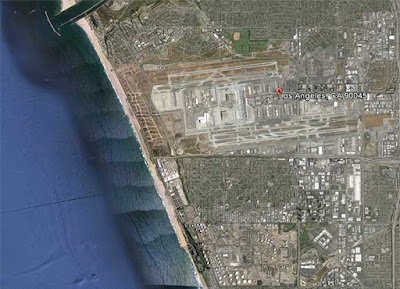 This story, from a local Los Angeles TV news station, is freakier than you may realize.

Jets taking off from Los Angeles International Airport (LAX) always head out over the ocean. The airport was built that way for obvious safety reasons: If a plane goes down shortly after take-off, you don't want it to hit houses. Moreover, people who live around the airport are very concerned about noise pollution, and very quick to complain about the issue. (I know about this because, in the early 1970s, my grandparents lived not far from LAX.)

So why is the military diverting air traffic? What the hell is going on?


Mysterious maneuvers over the Pacific are forcing a change in Los Angeles International Airport landings late at night, meaning noise for thousands of people in the flight path.

Instead of landing from the east over Inglewood, planes begin flying from the west and over the ocean to keep noise levels down, but due to secret military operations, the airspace over the Pacific is closed to incoming flights for the next week.

"We clearly understand that neighbors and communities east of the airport will experience noise and we apologize for that," said Nancy Castles, LAX public relations director.

The military is not saying what exactly is causing the change, and LAX claims it's also in the dark. Castles said all they know is planes can't be flying at low altitudes to our west.

Six years ago, ABC7 cameras captured a military operation in downtown LA. Helicopters were seen swooping between high-rises, close enough that residents were able to see armed soldiers in camouflage outside their window.

Authorities claimed it was part of a training exercise designed to ensure the military's ability to operate in urban environments and to prepare forces for upcoming overseas deployment.

What's going on this week is a mystery.


That last paragraph made me smile. I doubt that there are very many flag-waving Let's-Blindly-Trust-Our-Beloved-Gummint types in Inglewood. Wouldn't be surprised if the local news team had to talk to quite a few people before they found Devosion.

BTW,  the military also trained in Los Angeles in 2014.

I don't want to sound like one of those Jade Helm conspiratards, but a week-long diversion of the flight patterns around LAX is highly unusual. What the hell is happening off the coast of California?
posted: 5:36 PM