We are told that an anarchist group calling itself the National Liberation Militia plans to commit acts of violence against the police on Halloween Night. The anarchists will be dressed in costumes (as will about a hundred million other people).

We know about these plans because the FBI has delivered a warning. Oddly, The New York Post was given the scoop before any other news outlet.

At least one news report claims that members of this group had something to do with the 1999 protests against the World Trade Organization in Seattle. Unfortunately, the WTO link is exasperatingly vague.

In fact, this whole tale is exasperatingly vague. I call bullshit. None of this has the ring of reality.

So far, only right-wing sources are promoting this story. This seems to be one of those occasions when every writer on the right "gets the memo." They are reciting the same words with suspicious unanimity. 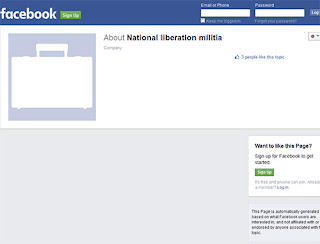 Fire up Google and you'll soon discover that the soi-disant National Liberation Militia has no internet presence, except for this Facebook Page -- which, you will notice, is empty. If it suddenly becomes active, you'll know that you're dealing with an entirely bogus entity.

Do members of this Militia communicate via Tor on the dark net? If so, why didn't the FBI mention that angle? Andif these people know how to stay anonymous, why would they keep a Facebook page?

Fox News says that the National Liberation Militia was founded by "former black panther members." The same cannot be said, of course, for the Seattle protest movement. That's an important contradiction.

I'm reminded of the events in Baltimore.

We now know that the Baltimore uprising was set off when anonymous sources convinced the cops that there were plans to attack police on the day of Freddie Gray's funeral. Those reports were false. To make matters worse, some idiot (or perhaps some malign genius?) decided to shut down the transportation center at the Mondawmin mall, leaving a lot of young people stranded, angry, and huddled in one place. They could not disperse. They could not go anywhere -- and they stood face-to-face with a bunch of very paranoid cops on foot and en masse.

The riots were, in short, engineered. Both the cops and the kids were puppets.

Will that history repeat itself on Halloween? I don't know, but I feel reasonably sure of one thing: If the National Liberation Militia were real, there would be proof of its existence somewhere on the internet. We'd be told a story that would make sense. Right now, this group appears to be a scarecrow erected to frighten the gullible.

By the way: The right pretends to hate the government, and over the years, many libertarian/far-right conspiracy buffs have had harsh things to say about the FBI. Yet when the FBI issued this warning, the right-wing blogosphere accepted the statement at face value. Not a hint of suspicion or dissent. No conspiracy theories about the lying, scheming gummint. Not a single trace of independent thought.