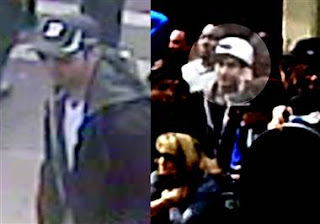 In the previous post, we looked at photos originally thought to depict possible suspects in the Boston bombing case. Most of them have been cleared.

However, the FBI has released further photographs which may prove relevant. So far, the feds have not given any sort of detailed explanation as to why these two guys have aroused their particular interest.

Although I hate thinking this way, I can't help noting that these too characters don't seem identifiably Middle Eastern. Thank god for that. I'd rather deal with domestic crazies than with foreign crazies, because foreign crazies might be sponsored by a foreign government, and this country is sick of war.

On the blast in Texas: Jim White, writing in the Emptywheel blog, makes a remarkably good catch: The victims were, in a sense, murdered by Libertarianism. Or as he puts it: "John Galt kills Texans."


Google Maps satellite view of West Fertilizer and its proximity to West Middle School, along with many houses and apartments.

Who needs pesky safety regulations or zoning laws when there is money to made running a fertilizer plant? Sadly, the small Texas town of West, which is just north of Waco, is suffering the consequences of unregulated free enterprise today, as a massive explosion at West Fertilizer has leveled much of the town. Perhaps the only remotely fortunate aspect of this tragedy is that it occurred at 8 pm local time and so West Middle School, which burned after the explosion, was not full of children.

A look at the satellite image above shows the folly of putting “free enterprise” ahead of sensible zoning laws. At almost 20 miles north of Waco, Texas, one thing that is in abundance in the region is open space (I’ve driven past this spot several times in the last two or three years–it’s desolate), and yet this fertilizer plant is immediately adjacent to a large apartment building (see the photo at the top of this article for how that building fared in the explosion) and very close to a middle school. There is no reason at all for any other building to be within two or three miles of a facility that produces material that is so explosive.


Oh yeah? Well, you know who else thought the gummint had a right to tell honest entrepreneurs where they could and could not build fertilizer plants? Hitler.
posted: 6:31 PM