Well, you can probably guess the first country-of-origin that popped into my noggin. To me, the telling detail is the extreme reticence on the part of these newsfolk to name the country, even though the on-air reporters have hinted that they know it. In America, only one foreign country gets that kind of ultra-deferential treatment.

Let's now return to the post I scribbled about a little more than an hour ago. (At the moment, it's 5:42.) I need some shut-eye.

It's the wee small hours of the morning here, and we're getting bizarre reports out of Massachusetts. First, a police officer was shot at MIT. Then there was a firefight in Watertown, and one of the suspects was allegedly brought into custody, although now I'm hearing a conflicting report that this suspect was, in fact, killed. (More on this below) His partner is free and on the run at this writing.

The Boston Globe is one of the few media outlets definitively saying that these two men were connected to the tragedy at the marathon.


One suspect in Monday’s Boston Marathon bombings has been apprehended, according to an official with knowledge of the investigation. Another appears to remain on the loose in Watertown after a firefight with police. A 20-block perimeter was established as authorities searched for him.

A spokesman for the MBTA said that a transit officer had been shot and was in serious condition.


NBC has video of the firefight. (Unfortunately, I can't embed the clip.)

HuffPo has been updating the story continually throughout the night.


Chatter on the police scanner revealed confusion on the scene as officers reported gunfire, explosions and chaos at the intersection of Laurel and Dexter Streets. Heavily armed officers from Homeland Security have been spotted in the area, as have members of the FBI and National Guard. Helicopters are currently using search lights to illuminate the darkened neighborhood.

Larry Victor, a dentist in Watertown, told The Huffington Post that he heard dozens of shots and at least two explosions.

In response, all police units have been ordered to retreat to a perimeter being set up near Auburn, Walnut & School Streets. Officers entering the perimeter were ordered to turn off their cellphones. A robot has been brought in to investigate the scene for explosives.

Andrew Kitzenburg of Watertown told the New York Times that he observed a confrontation from a third floor window. He saw two men in jackets engaging in "constant gunfire" with police officers.

The shooters tried to detonate a bomb. “They lit it, still in the middle of the gunfire, and threw it. But it went 20 yards at most," Kitzenburg told the paper.


In a press conference given just a few minutes ago (at this writing, the time is 4:30 AM), the Boston police announced: 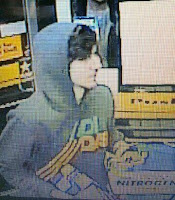 "We have a video from the 711 in cambridge last night that he's in a gray hoody sweatshirt. Caucasian male, with long curly brown hair. Thats the individual we're looking for right now."

The photo to your left shows the most recent suspect photo released by the Boston cops.

The cops apparently detonated an unexploded bomb around 4 AM.

At this time, the biggest mystery is whether the first suspect is alive or dead. CNN has broadcast a picture of a barechested man in police custody. Yet he is now reported (by Boston.com) to have died, perhaps while in custody. All the reports I've seen so far speak of only two suspects. We also have this from USA Today:


Police could be seen with guns drawn one one man face down on a paved street.

Compare the headline of this Boston.com article with the first paragraph of this later story. If an arrested suspect was killed -- or somehow managed to kill himself -- well, the words "goatfuck of massive proportions" suggest themselves.

The story should be a lot clearer very soon.
posted: 4:46 AM