Authorities are circulating an image of the men they feel may be responsible for the Boston bombings. They don't exactly look like American right-wing extremists. 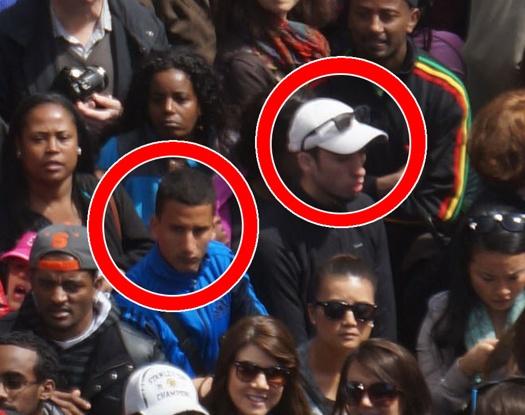 Ms. Geller will be with you shortly. She's coming.

If these really are the guys, I hope to god they are not acting on behalf of any state. The moment we hear about any linkage -- however tenuous or implausible -- between the Boston attack and Iran, all of our lives could suddenly become very, very, very bad.

Update: (Thanks to reader Dan!) The infamous -- but in this case, quite useful -- 4chan site has published a series of photos showing suspicious men. This guy sure looks suspicious, although he isn't dressed like either of the two men pictured above. 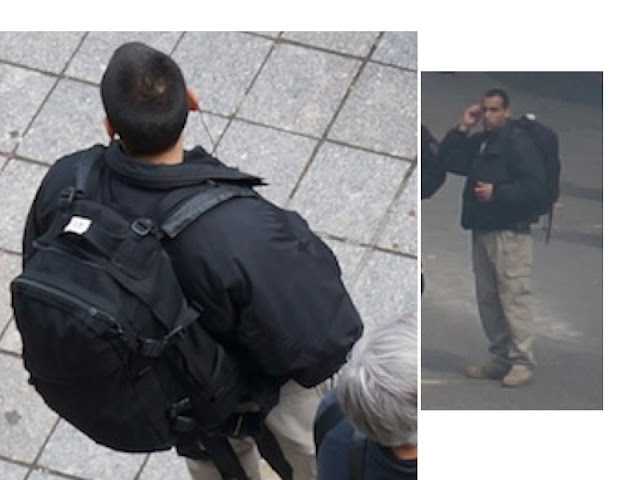 And then there's this fellow, who looks like your standard-issue American Caucasian dude. The 4channers seem to feel that the grey stripe on his backpack resembles the stripe on the recovered remains of an exploded pack. (You'll need to click on the photo to see the details.) 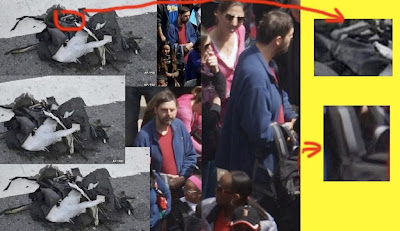 And here's another shot of the two guys in our first picture... 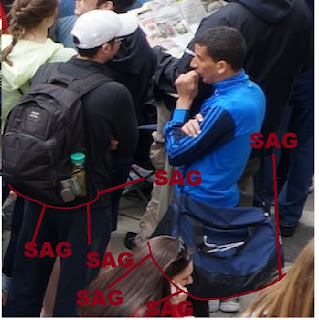 Update 2: I'm informed by a reader that the guy in blue with the duffel bag has been cleared. I don't yet have a link confirming that information.

The right-wing conspiracy sites (Alex Jones, the Paultards, Michael Savage) are claiming that guys wearing Navy SEALs caps were photographed on the scene. Riiiight. Offhand, I can't think of anything more inane than the suggestion that a SEAL would wear an identifying cap while covertly perpetrating a terrorist outrage in Boston.

This scenario reminds me of an old Simpsons episode -- the one in which Homer joins the Witness Protection Program. To celebrate, he dons a t-shirt with the words "WITNESS PROTECTION PROGRAM" written across the front.

About the fertilizer plant explosion near Waco: So far, we still have no indication that this terrible event is anything other than an accident.
posted: 12:08 PM