Sorry for the light posting; I'm working on a major video project. No $$ involved (although...who knows?), but I'm addressing a non-political issue of great importance.

Right now, I invite you to glance at this comic from the same team who put together the one-page al-Awlaki graphic novel featured in our previous post. This strip will hit home with many of you, since most Cannonfire readers have mounted serious left-wing critiques of our current president. (Hard to read? Click to enlarge, or go the link above.) 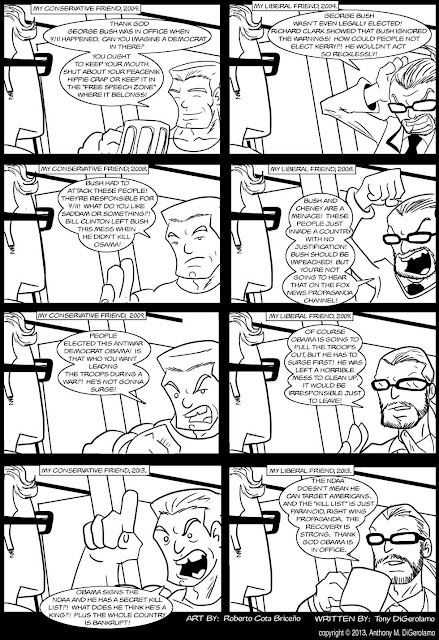 All of which brings us to today's puzzler.

It's apparent that both liberals and conservatives are guilty of putting party above principle. We all get so caught up in the horse race that we forget why the race exists in the first place.

When Dick Cheney said "Reagan proved that deficits don't matter," nobody on the right screeched at the veep. When a Democrat got into office, deficits suddenly mattered more than anything. Chalk it up to the "party over principle" principle.

On the other side of the aisle, many liberals voted for Obama because they thought he would be President Peace-Lover. When he turned out to be President Surge -- and then President Death-From-Above -- the Obots went into rationalization mode.

At least, some of them did.

Many did not. During the 2009-2011 period, lots of lefty blog commenters registered many a harsh complaint about Barack Obama, and there's no use pretending otherwise. In fact, I would say that -- for a while, at least -- the complainers outnumbered the rationalizers, even on Daily Kos. The left got scared back into Camp D only when the Republican primaries gave us a close look at the opposing forces.

Until very recently, I would have said that liberals are far more likely to express their disdain for Democratic politicians. (To cite but one example: Back in 2007, Nancy Pelosi probably had more left-wing enemies than right-wing enemies.) However, the Tea Party's recent activities -- particularly their extreme hatred of Karl Rove -- have forced me to reconsider.
posted: 5:11 AM