Being on all sorts of left-wing and right-wing mailing lists, I receive many emails perfumed with the distinct aroma of psychosis. For a particularly strong whiff, check out the following, which I received a few hours ago... 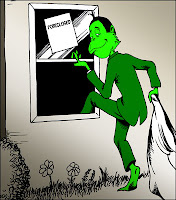 There’s a reason why Obama wants to snatch our guns.

It’s not the safety of your kids. Or crime. Or mass murders. It’s something you’d never imagine the government wants:

Because when it hits the fan… the government knows it can’t possibly feed 46 million food-stamp recipients.

FEMA will have to find food somewhere. But they can’t take yours if it’s protected.

But there’s one kind of stockpile they can’t steal… no matter how hard they try:


I'm not inclined to give the link to Mr. Deacon's "renegade prepper" page. You'll have to use Google.

What we have here is yet another example of how The Apocalypse drives the American imagination. Perhaps the world's imagination.

Our society has become a maniac's hells-broth of clashing apocalypses: The fellow who insists that Obama wants to raid your fridge vs. the hyper-feminist who argues that all heterosexual sex is rape vs. the ill-educated lad who wants to increase military funding because we may one day need to send in the Marines to fight against space aliens vs. the 9/11 "truther" who thinks that his beatific vision exempts him from the dictates of logic or civility vs. the Christian fundamentalist concerned about the imposition of Sharia law in Oklahoma vs. the atheist fundamentalist warning us that only a theocrat would say that Jesus was a historical figure vs. the Southern Baptist litterateur whose shelves curve under the collected works of Tim LaHaye vs. the pop-cultured geek who wants our government to make plans for the coming Zombie invasion.

Perhaps I should mention our old friend b, a frequent contributor our comments section, who sometimes writes wistfully about the communards who burned down the Tuileries. Dammit, why can't we have days like that again?

Perhaps we will. And perhaps those who long for such a conflagration won't like it when it happens.

Maybe Alan Moore (who has written a few good Apocalypses in his time) was right when he wrote, in The Voice of the Fire, that history is a heat and the world is turning to steam. Or maybe I'm right: History is indeed a heat, and a bunch of idiots have been stuffing C4 into every cranny of our culture.
posted: 3:22 AM