Well, this is new -- a mini-comic about Anwar al-Awlaki, the American citizen who got the "death from above" treatment from Obama. 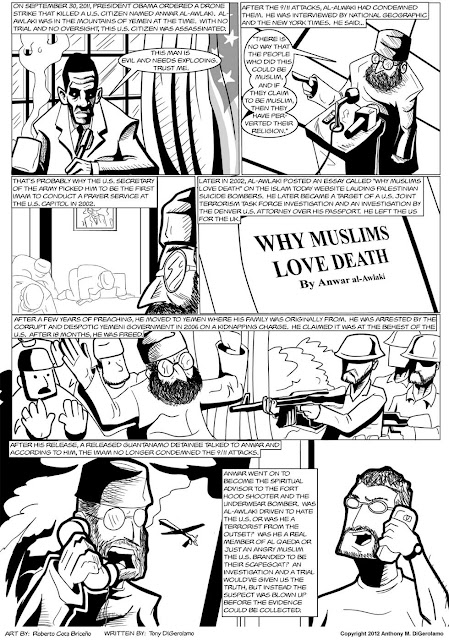 (Click on the image to enlarge, if the text is too small for you.)

Of course, there's another explanation for the Awlaki affair, which I have outlined in previous posts. Incidentally, nobody is doing better work on this matter than is the remarkable Marcy Wheeler. She makes two points which may (or may not, depending on your reading) buttress my little theory:


Awlaki was first targeted, by the military and before the OLC memo the white paper is based on was written, at a time when the intelligence community did not consider him operational.

During negotiations for a plea agreement that never happened, Umar Farouk Abdulmutallab implicated Awlaki in a clearly operational role, but after plea negotiations fell apart, that testimony was never presented in an antagonistic courtroom (indeed, the government itself told a significantly different story at Abdulmutallab’s trial).

In my view, both of these factoids are congruent with my suspicion that Awlaki's killing was a ruse designed to cover an exfiltration. Of course, I could be wrong.
posted: 9:37 PM