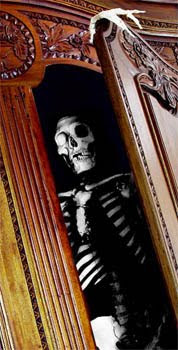 (Note: There is a serious problem with the testimony of Sibel Edmonds. See the second update below. I may have to apologize to my readers for my previous positive treatment of Edmonds.)

Ah, this is delicious! You want a sex scandal? We got one!

BradBlog is live-blogging the Sibel Edmonds deposition, which we described two posts below. Here's the bit that everyone will be talking about:

Also, a current female...member of Congress who has been blackmailed by the Turkish Government...called a 'hooking exercise'...she's apparently bi-sexual and they bugged her apartment, she's married with children, and they set up a relationship with another female who went in and had sexual relationships with her. And they had all the episodes bugged within this current Representatives home and they blackmailed her. ... She wouldn't give her name, but her photograph [is the one with the question mark on it in the "Sibel Edmonds Rogue Gallery" ] .

The context of the discussion was that this particular Representative was amenable to passage of the Armenian Genocide Resolution. And then based on this 'hooking' operation, changed her position. She was reluctant to put this person's name on record.

So who is the mystery congresswoman, and why is Sibel Edmonds being coy about the name? I'll presume that we're not talking about Jean Schmidt -- a refusal to name her would have been ridiculous, given the circumstances.

There are at present 74 female House members. If you want a list, go here.

I think we have a likely suspect, my friends: Jane Harman. Check it out:

Community activist and civic leader Azniv Goenjian recently traveled to Washington, DC with the Armenian National Committee of America – Western Region (ANCA-WR) to confront her Congresswoman, Jane Harman (D-CA-36), for secretly opposing the Armenian Genocide Resolution, H. Res. 106, while publicly presenting herself as a supporter of this human right legislation.

Ties right in with what Sibel said, does it not?

This sort of thing has happened to Jane before. Remember her similar involvement with the AIPAC scandal? Remember this? (Also here.) If Jane Harman has a skeletonized closet, then her strange role in the AIPAC matter suddenly takes on a new dimension.

It's especially interesting if we posit that Turkey and Israel were trading intelligence. And that's a really good bet. See here and here:

According to a report in The Jerusalem Post, intelligence cooperation between the Mossad and the Turkish security service, MIT, "was enshrined in a 12-clause agreement that was signed during a 1993 visit to Israel by then-Turkish foreign minister Hikmat Chetin".

Soon after, according to the London-based newsletter Foreign Report, a large Mossad operation was established in Turkey, with Mossad agents based in both Istanbul and Ankara.

That's the part which even Sibel is leaving out. (Also see my previous post here.)

Update: Sibel Edmonds has fingered Harman before. See here, and do some reading between the lines.

Update 2: There is a serious problem with Sibel Edmond's testimony, at least insofar as it has come down to us. (We do not yet have the actual transcript.) The issue is one of chronology.

The Armenian Genocide Resolution was introduced in 2007.

Although her name may sound like "sibyl," I don't think that Edmonds was getting dispatches from the future during her FBI tenure.

And yet she said in court that the blackmail occurred in "the context" of the Armenian Genocide Resolution!

Now, it is true that we know about her testimony primarily from David Krikorian, who was offering his precis of her words in court. But I simply cannot see any situation in which he would have brought up the Armenian Genocide Resolution unless Sibel had done so first.

After the testimony, a "clarification" was issued:

After reviewing our coverage, Edmonds clarifies that she did not discuss the specific voting record of the Congresswoman in question discussed above, because she didn't, and still doesn't, know her record on that particular issue. As Krikorian's quote above may have been inadvertently misleading on that point, she wanted to correct that record. - BF

This statement hardly resolves anything.

1. The Armenian Genocide Resolution has never come to a vote. All talk of voting records is therefore meaningless.

2. Nothing in this clarification addresses the serious chronological problem.

I will withhold final judgment until I see the transcript of Edmonds' actual words. Frankly, though, I am starting to feel angry at myself at for publishing so many pro-Edmonds pieces in the past.

Update 3: There were earlier House Resolutions on Armenian genocide, both from the year 2000: HR 155 and HR 596. Both of these were shot down well over a year before Edmonds joined the FBI. Arguably, her translation work may have covered older business. So far, though, I have yet to find any dramatic turnarounds on those resolutions involving female Democratic representatives still serving in Congress who are also currently married and who have children.
posted: 3:31 PM