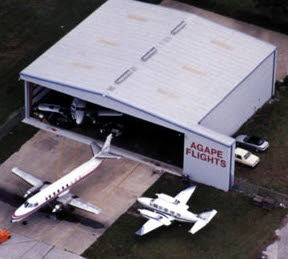 Agape Flights is a Florida-based aviation firm servicing missionaries in Haiti and other third world spots. Daniel Hopsicker has put together a remarkable skein of evidence suggesting that the firm may be transporting something other than the Word of the Lord.

Is Agape one such enterprise? I can offer no definitive answer; I ask only that you consider the possibility. While I cannot here summarize all of the indicators, the following summary should evince a Spock-like rise of the left eyebrow.

1. Agape operates at the world-infamous Venice airport, where Mohammed Atta trained. The firm is locally notorious for secrecy. They usually do their business behind closed hangar doors.

2. A pilot named Mark Mikarts flies for Agape. The same pilot was Atta's flight instructor. He also has been known to use the name Mark Wierdak. His sister works for the American consulate in Venezuela, and, when contacted, would not offer any rational explanation for the use of two last names.


3. In 2006, an Agape pilot named Steve Huisman was flying a twin-engine Beechcraft King Air 90 in Florida -- during a tropical storm predicted to attain hurricane status. The aircraft crashed into a private home, killing the pilot instantly.

There was no flight plan.

Agape said that Huisman was releasing sterilized Med flies. In a near-hurricane.

4. Huisman also worked for Dynamic Aviation, a Virginia Company which hired him to fly in and out of Afghanistan. Nobody knows what he was shipping.

5. Agape rents office space and a hangar for the remarkable sum of $2,114 a month. (To put that sum into perspective, I recently saw a small storefront in a dismal area of the San Fernando Valley going for over $5K a month.) Agape leases out part of their office space for $5000 a month, which puts them into the black for doing nothing. (Interestingly, Agape faced eviction in 1999, back when they were in their old digs in Sarasota.)

6. The United States government has given Agape special permission to make regular flights to Cuba.

7. When Agape first moved to Venice, they shared hangar space with a man named Coy Jacob, who gave Hopsicker this startling report:

“I couldn’t believe what I was seeing. Its obviously a very well-funded operation, but the stuff they’re flying down to Haiti is junk,” he told us bluntly.

“Stuff that didn’t sell at garage sales. Used silverware and plates, used bedding. Every so often we’d see a new coffeepot, or a portable generator. But it was mostly all junk.”

“With the price of aviation gasoline today, it costs them between $6000 and $8000 just to fly down and back to Haiti. And for what? A couple hundred bucks worth of toasters?”

I find Jacobs' report the most compelling indication that Agape may be involved with a "protected" smuggling operation.

(Perhaps I'm reaching, but while reading this material, my mind flashed back to those notorious Israeli "mover" companies which shipped trucks filled with junky furniture back and forth across the U.S.-Canada border.)

I'd like to add one connection which Hopsicker didn't catch.

Agape appears to be linked with the mysterious, cult-like missionary group Youth With a Mission, or YWAM. See here, here, and here.

If YWAM seems familiar to you, think back to the brouhaha surrounding the propaganda film Path to 911. That's the one which faked the facts to blame the "Osama problem" on Clinton. For still-unknown reasons, the Disney Corporation broadcast the thing commercial-free last year. The film's director, David Cunningham, is a member of YWAM, which was founded by his father, Loren.

I wrote a few stories about YWAM last September; see here and here.

Although YWAM does much legitimate missionary work, I discovered some troubling indications that the organization may have fit the "spooky" profile outlined in those old Christian Century articles. The stories on the other side of the afore-mentioned links should explain the reasons for my suspicions. Suffice it to say that YWAM had connections to Guatemalan tyrant Rios Montt, who rose to power with Agency help. When questioned about Path to 911, David Cunningham cryptically told an interviewer "We have our CIA consultants and Clinton has his."

Can I prove that Agape has any involvement with either smuggling or American intelligence? No. Not in the sense that one can offer proof for a mathematical problem. But the evidence offered by Daniel Hopsicker raises some troubling questions.

As the Book says: "Behold, I show you a mystery."