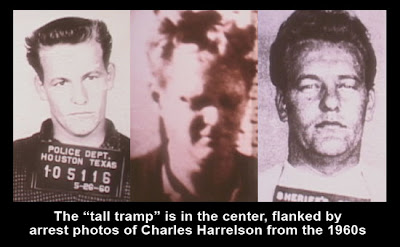 This account gives a rather full summary of one of the more intriguing tales to emerge from JFK assassination lore: Did Charles Harrelson, father of actor Woody Harrelson, take part in the murder of John F. Kennedy?

The elder Harrelson. who died last week, was convicted of killing Texas Judge John H. Wood in 1979. He committed the crime, it is said, on behalf of accused drug smuggler Jimmy Chagra.

Woody maintains that his father was innocent of that crime.

Before his arrest for the Wood murder, the elder Harrelson bragged about taking part in the JFK murder. Although he later retracted the claim, Chagra's brother has said at trial that Harrelson was hired based on his alleged participation in the JFK assassination. Moreover, a reporter named Chuck Cook has said that Harrelson once promised revelations about "November 1963" if he ever got out of prison. When arrested, Harrelson was found with the business card of a mobbed-up Jack Ruby associate.

Either the man was an attention seeker -- always possible -- or he really did take part in the most notorious American crime of the previous century.

For years, assassination buffs claimed that Charles Harrelson strongly resembled one of the three "mystery tramps" arrested after the assassination. In the mid-1990s, a researcher uncovered paperwork naming the three tramps, none of whom was Charles Harrelson. That documentation led me to consider that aspect of the mystery resolved. However,

...arresting officer David V. Harkness has said that more than three transients were pulled out of the boxcar on that day.

If that is true, then the so-called "tall tramp" may indeed be Charles Harrelson.

I have put together a photo comparison. Note especially the matching cowlicks and the odd "slope" to the mouth, which, in all three shots, does not parallel the eye level.

Come to your own conclusions.

(Incidentally, I have no idea if Oliver Stone discussed this matter with Woody Harrelson during the making of Natural Born Killers.)
posted: 4:03 AM