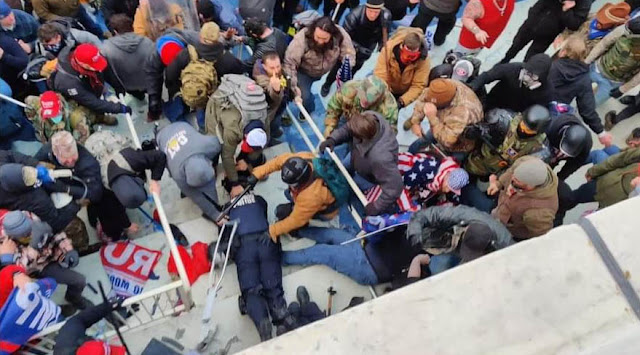 The photo above shows Trump's Nazis murdering Officer Sicknick. The video, embedded below, is even more horrific.
Everyone knew what was going on. Everyone who invaded the Capitol Building knew damned well that they were there to commit murder.
There were no innocents. All must be identified and charged with conspiracy to commit homicide -- including and especially their leaders, Donald Trump and Rudy Giuliani.

It's easy to predict what will happen when these fascists appear before a judge. Many of the invaders will offer a "piano player in the whorehouse" defense: Yes, I was with Nazis and killers. But I was not myself a Nazi. I was not there to kill.
Bullshit.
They all knew. They had a plan. Hundreds of social media posts prove the point. They were fascists pretending to be patriots, as fascist have always done. They came to that place to commit murder and to overthrow democracy.
Every single one of them is guilty. Every single one is a traitor.
EVERY. SINGLE. ONE.
I have to add something else.
It is fair to ask whether I should be judged by the company I kept when I participated in a few protests back in the early '80s. The issue at that time was American involvement in Central America. I believed that we had no business there -- which happened to be the majority opinion at the time, although Reagan seemed to feel differently.
Yes, there were some annoyingly loud self-proclaimed Marxists at those rallies. I was quite aware of them; you couldn't miss them. I was not one of them.
Hypocrite! I can hear you saying. If we are not supposed to judge you by the company you kept, how can you insist that every single person in the Capitol Building bears responsibility for the death of Officer Sicknick?
Here's the difference: At the protests I attended in the 1980s, nobody did anything illegal.
Nobody wanted to do anything illegal. Nobody hinted or suggested that we do anything illegal. Quite the contrary: Before the protest began, everyone kept repeating ad nauseum that we needed to keep things peaceful and within proper boundaries.
If I had heard even a whisper of violence, I would have run far away. I may have been young and stupid, but I wasn't that stupid.
As long as peace reigned, I didn't mind hobnobbing with the far left. Or (on other occasions) with the far right.
At one time, right-wing oddballs didn't scare me. Much. They scare the hell out of me now, but in the early '90s they seemed merely outré. The Oklahoma City bombing finally awoke me to the dangers.
In the previous century, I met with all sorts of oddballs -- left, right, off the map. I've conversed at length with an astonishing variety of religious nuts. Frankly, I enjoyed chatting with weirdos; they made life interesting. But after a while, they can become annoying -- and so, around the turn of the century, I decided to pursue a duller existence. Today, the only weirdo in my life is me.
What happened on January 6 was very different. The insurrectionists were not legitimate protesters. And they certainly were not a conclave of Des Esseintes-types desperate for distraction from the quotidian.
They were a mob on a murder mission. They are a political cancer.
100 days? NO! There is talk of waiting 100 days before sending impeachment over to the Senate, in order to give Biden's agenda a chance. This is a disastrous idea. Biden's agenda has no chance of success until Trumpism is destroyed. If Trump is completely discredited, impeached and jailed, then the Democrats will have far more than 100 days to get other things done.
Right now, a war on American fascism is the only aspect of a Biden presidency that I truly care about.
Added note: According to Trump's lawyer, Lin Wood, the Pope was arrested recently on 80 counts of child trafficking. Amazing how they kept that arrest out of the news. You'd think that any conspiracy powerful enough to suppress that information would also be powerful enough to prevent the arrest in the first place.
posted: 1:04 PM