Cannon here. Impeachment is a lock. That's great. There are ominous rumblings of a further insurrection attempt on the 16th and the 17th. That's horrible. 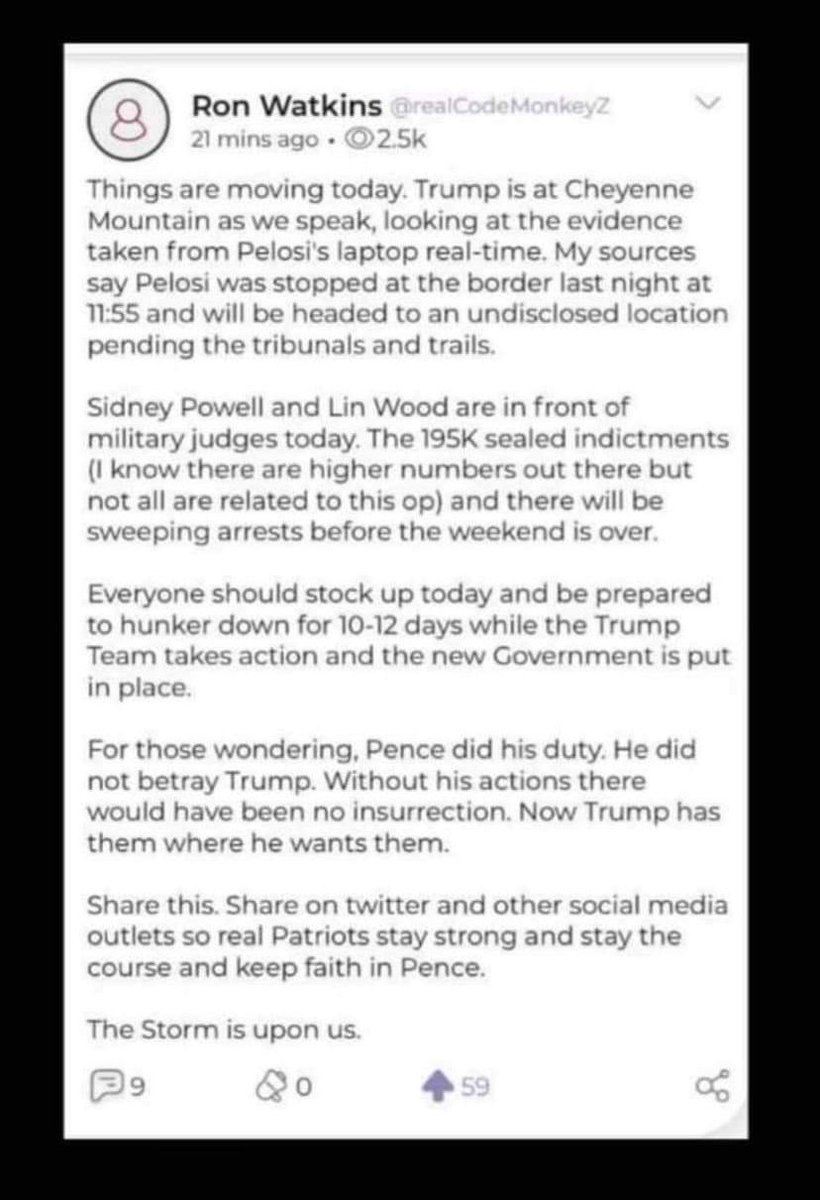 The great problem is what my fellow writer D-Jay calls the iron bubble of disinformation. After the riot, the Qrazies went even crazier than usual, claiming that the Pope has been arrested, that the "dark web" is circulating a video of Hillary and Huma eating an infant, that Ashli Babbitt and Jake Angeli were Antifa infiltrators, that NPR published a before-the-fact headline about the storming of the Capitol Building, that Lego released a "Capitol Invasion" set months before the event...
...and the madness goes on and on. The Qrackpots are also predicting that Trump will impose martial law. (Incidentally, some say that Ron Watkins -- author of the mad text republished to your right -- is literally the son of Q.)
This podcast does an excellent job of explaining all of the lies and delusions which begat the attempted putsch -- which the hosts cleverly call "Coup Anon."
I just discovered that the Qooks believe that JFK had an affair for "seven long years" with Nancy Pelosi, who was 23 when he died. In other words, Kennedy raped a 16 year-old. You want proof? Well, we have a photo of Pelosi standing next to JFK. And, as usual, something something Marilyn Monroe.
In the WP, Michael Scherer offers an excellent opinion piece about the ongoing war between disinfo and democracy. But the best piece on the topic comes to us by way of our friend D-Jay. For the past day or so, I've been composing a similar post in my head; his thoughts echo my own.
I love the phrase he has coined: The iron bubble of disinformation.
*  *  *

Trump derangement syndrome – throughout the hellish four years of the Donald Trump debacle, his toadies have used this term to deride anyone who tried to warn the world about just how bad this guy really was.  Get a grip, they would say, it’s just Trump being Trump.  He’s just a showman.  He doesn’t really mean it.

Turns out the apologists had it wrong.  Completely wrong.  180 degrees wrong.

The phrase is nothing but a shallow defection attempt when applied to the truth-tellers, but if turned around, it describes to a tee his angry mob of followers.

As we all know, this mass delusion has been years in the making, enabled by the likes of Fox “News,” Rush Limbaugh and his legion of right-wing talk radio wannabes, the mega-church toxic right-wing pseudo-Christian moneychangers, home schooling, the wholesale buyout of local TV stations and newspapers by the likes of Sinclair Broadcasting, the death of civics education and development of critical thinking skills in our schools, and, of course, the takeover of our information exchange by for-profit social media.  And into this toxic brew has been added what seems to be conspiracy-theory based information warfare, aka QAnon.

Barack Obama and other have called it “truth decay,” but I prefer something a little stronger, like “the iron bubble of disinformation.”

Even with all this, however, the process we have seen unfold since the election is nothing less than remarkable.

We have learned, it seems, that self-delusion can be every bit as contagious as the coronavirus.

Remember shortly after the election?  As Mary Trump told us, her uncle, Donald, has an ego so fragile and inside he is so terrified of being labelled a failure that he literally could not psychologically accept the reality of his defeat.

So what did he do?

A lifelong practitioner of a uniquely narcissistically warped form of Norman Vincent Peale’s “Power of Positive Thinking,” he is reported to have wandered around the White House muttering to himself, “I won. I won. I won.”  In time, the self-hypnosis worked for him, and, since then, he has seemed to genuinely believe his own Big Lie – that the election was stolen from him.

Next step, like a New Age occultist, “manifesting” his inner belief into the outside world and somehow making it a reality – actual facts be damned.

Even with the iron bubble disinformation infrastructure in place, the lie this time is so outrageous and unsubstantiated that it probably could have been nipped in the bud – or at least limited in the damage it could inflict on the nation – had the so-called “mainstream Republicans” not stepped aside and given it the space it needed to take hold.

Had Mitch McConnell, Kevin McCarthy and company just have had the courage to straight-forwardly congratulate Joe Biden on his victory as soon as it was clear he had won, would things have gotten so bad?  Would we have had an invasion of our capitol by a deranged mob of MAGA terrorists?  I don’t think so.

But, of course, they didn’t, so here we are.

We are, in the words of Jeffery Goldberg, “in the midst of a mass delusion event.”

True Trump derangement syndrome – and don’t expect it to go away anytime soon, certainly not in time for the inauguration.  These people are too far gone to be deprogrammed now.

So what needs to be done?

First – The authorities need to recognize that a large scale armed attack on Washington in the near future is a real possibility.  The hateriot and MAGA terrorist crowd themselves have clearly said so with their calls for a “million militia march,” to which weapons are very much welcome.

Let’s not ignore the warnings this time.

A cordon around DC is needed.  All incoming vehicles should be checked, and anything remotely resembling a weapon – including guns of all types and sizes, knives, baseball bats, any flag handles or other gear which can be used as clubs, mace and other chemical agents, bombs or bomb-making supplies, helmets, body armor, shields, brass knuckles, drones, and so on – should be confiscated on the spot and not returned.

Secure barriers should be erected and fully manned wherever needed, and if there is any doubt, put it up.  All riot police and SWAT teams from the surrounding area should be fully armed and ready to go at a moment’s notice.

A large contingent of National Guard, equipped as if they were headed for Afghanistan – armored vehicles, heavy machine guns, the whole nine yards – should be standing at the ready.

For anyone, anyone trying to pull anything like they did on Wednesday, shoot to kill should be the standing order.

If any of these clowns actually want to have a peaceful protest at the inauguration, let them do it in a G. W. Bush style “free speech zone,” safely away from the city center.  The defunct RFK Stadium two miles away from the Capitol and across the river might do nicely

Air defenses should be activated in case of attempted drone or small plane attacks or 9-11 style airline hijackings.

And that’s just for Washington D.C.  Every state capitol and governor’s mansion in the country should be similarly prepared, as should the headquarters of Facebook, Twitter, Amazon, Google and any other social media related company that has acted in any way against Trump.  Ditto for CNN, MSNBC, The Washington Post, The New York Times, and the rest of the mainstream media.  Remember the Charlie Hebdo and Capital Gazette attacks?  I’m sure the Proud Boys do.

We are on the verge of civil war, and our security forces had better be ready to stomp it out the moment anything happens.

Every media platform and every government leader in the country need to expose, as loudly and continuously as they possibly can, the fundamental fact that Trump’s “I won” message is nothing but a psychotic delusion and all repetition of it nothing but a Nazi-style Big Lie.

Even so, we are probably looking at years of lower-level violent insurgency.

Of course, impeachment proceedings should be started, although not necessarily completed right away, if they would interfere too much with the start-up of the Biden administration.  In the meantime, a massive investigation of the relevant facts could be started.

Reluctant as he might be, Mike Pence had also better be ready to pull the trigger on the 25th Amendment at once if anything further happens in the last few days running up to the inauguration – and have let Trump know it in no uncertain terms.

Meanwhile, the Justice Department should be going full out with prosecution for everyone involved in the Capitol Hill obscenity – starting with Donald Trump and select family members, and every enabler who had anything whatsoever to do with it.  In the words of Morning Joe, “We must make an example of all these traitors.”

Congress should also take a long, hard look at every member who facilitated or supported the sedition and be prepared to sanction or expel anyone directly involved.  Josh Hawley, Ted Cruz, Mo Brooks and Louis Gohmert would be good places to start.

Longer term, dozens of other measures are desperately needed, starting with a strong domestic terrorism law, drastic reform of social media, and development of countermeasures to QAnon and similar information warfare conspiracy theory activities.  And that’s just for starters.

Lots more to be said about all of it, but let’s leave it here for now.

Contributing factors to our democratic decline:

Truth Decay – Destruction of the Ability to Distinguish Fantasy from Reality

Ever Worsening Demonization of the Media

Manufactured Distrust of Science and Expertise

The Iron Bubble of Disinformation

Information Warfare Aimed at Us

Emergence of a Full-blown Cult of Personality

Sexism and a Pseudo-Macho Mentality

Putinism and the International Neo-Fascist Movement

Lack of Education in Civics and Critical Thinking Skills

The Collapse of Good Manners and Propriety

From the Left (and Sometimes the Center)

Surrender of Rural America Without a Fight

Failure to Call Out and Counteract Toxic Right-Wing Christianity

Failure to Call Out Right-Wing Racism, Sexism and Fascism for what it is, and Counteract it in Time

Failure to Recognize Just How Bad Things Can Really Get