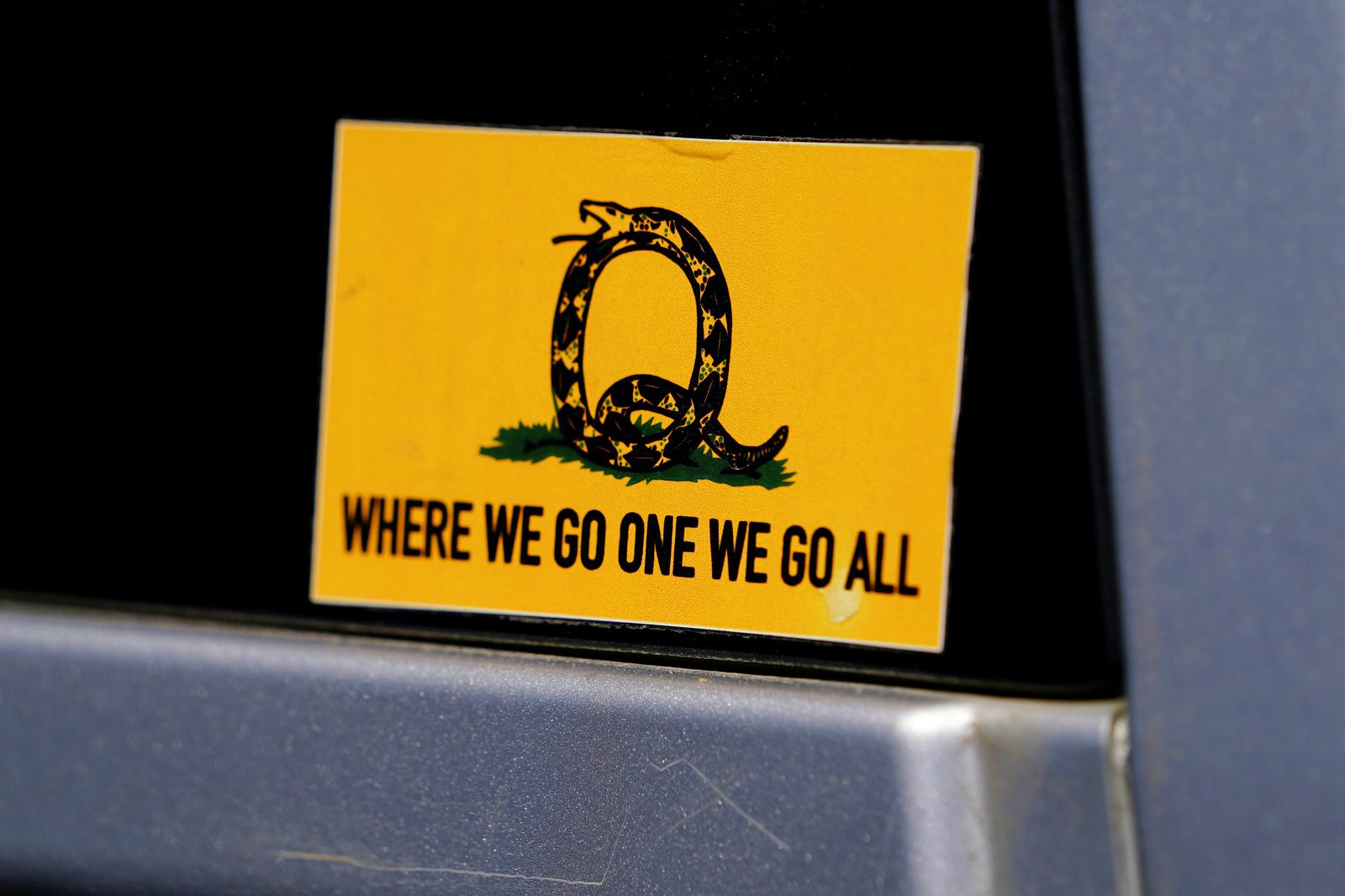 Amusingly, Q is here identified -- by one of his followers -- as a snake in the grass. Literally.
The image comes from this Reuters story which offers new research into the origins of the Q mythos.

A more granular review by Reuters shows Russian accounts began amplifying the movement as it started, early in the previous month.

I am not persuaded that Q himself is Russian. I still favor the idea that Q is a Germanophile, and that his pseudonym derives from the German word Quelle -- "source." The same word inspired Q theory in New Testament studies.
Although Q probably is not Russian, it is clear that Russia is doing everything it can to aid the cause of international fascism.
The coming horror. I predict that Trump will "win" this election even though a clear majority of Americans will cast votes for Biden. When you look at what's really going on in FL, in PA, in GA, in MN...well, I just don't see how the Dems can hope to prevail.
The problem with the talking heads on MSNBC and CNN is that they refuse to accept the reality of election manipulation. The only commentator who mentions this factor is, of course, Brad Friedman. You really must listen to this podcast: It'll chase the optimism out of your soul the way my dog chases squirrels out of the yard. You'll learn more from that one show than you'll learn from the next fifteen hours of MSNBC.
For example: In PA, they are using a new ballot-casting system which practically paints the words "RIGGED!" on the voting booth curtain. You really think that Biden has a chance? C'mon, man.
Heretofore, Republicans have felt constrained to keep election rigging limited by the number of undecideds. Everyone keeps telling us "In 2016, the undecideds all broke for Trump." Really? All? Where's the proof? The people who repeat this claim are cowards who can't admit that election-rigging is real.
For the same reason, teevee talking heads incessantly tell us that Trump "pulled an inside straight" in 2016. No. He cheated. Why pretend otherwise?
The undecided vote was a limit in 2016 -- but in 2020, even that limit will be gone. Trump is no longer in a position to concern himself with mere plausibility. He needs to win this thing at all costs, because the alternative is terrifying.
That's why he suddenly decided to stay in the White House on election night. That's why he's building a new, allegedly impermeable barricade around the building. That's why he plans to use the National Guard as his personal defense force.
I smell war.
Here's a thought: Perhaps the official results will be absurd on their face -- for example, California could go for Trump. I'm pretty sure that the Russians can make a thing like that happen. Such an outcome could give Trump an excuse to postpone the meeting of the Electoral College.
If Biden "loses," how should Dems react? First and foremost, Democrats must forego their usual response: Heaping hatred on their own candidate. Sure, Biden did a few things wrong, and his age was always a concern -- but overall, I would say that he has run one of the best campaigns I've ever seen.
And for God's sake, let's ignore the INEVITABLE complaints that the ticket wasn't sufficiently appealing to Black people. Black voters were the ones who picked Biden! I, for one, will always be grateful to them for saving us from Bernie Sanders.
Starting on November 4, a horde of loudmouth progs will scream that Bernie -- fucking Bernie -- would have brought in more African Americans. Arrogant white Bernie Bros think that they know better than Black voters what kind of candidate Black voters like.
We will be told endlessly that Biden should have done even more to increase Black turnout. Lefty pundits always tell us that the key to winning elections is to increase the size of the Black vote.
Sorry, but...no.
Blacks always show up to vote in admirably high numbers. We can't demand more from them. We can't fairly ask them to treat every election like 2008.
The hard fact is that Black people are not numerous enough. Yes, they are the party's most loyal and (in my opinion) most sensible voters. But they are only twelve percent of the population.
Please, Democrats: Stop pretending that the number is higher. Stop treating a simple mathematical fact as a politically-incorrect Great Unspeakable Thing.
Here's another unspeakable truth: Black people are distributed among the states in such a way as to diminish their political effectiveness. Most of them don't live in purple states. They live in states that are solid blue -- California, New York, Illinois -- or solid red. In each of the southern states, Blacks are between 20-to-35 percent of the population. With exquisite precision, history has apportioned southern Blacks in such as way as to render them impotent in national elections.
To comprehend my point, imagine the result if a large portion of Alabama's Black population were to move to, say, Georgia and Mississippi. That relocation program would result in four more Democratic senators -- probably Black senators -- as well as 21 electoral votes controlled by Black voters.
That's power.
Obviously, this relocation program is a pipe dream. One cannot fairly ask so many people to leave their homes. It's not gonna happen.
But what the Dems can do is pay more attention to Hispanic voters.
They are somewhat more numerous than Blacks. True, African Americans are substantially more likely to vote, but a Hispanic on the national ticket would surely increase Hispanic turnout.
Best of all, many Latinos live in those all-important purple states: Florida, Texas, Arizona.
If Biden had been allowed to chose an Hispanic running mate, he'd have had a better shot in Texas and Florida.
"No hope could have no fear." Then again, why am I even thinking this way? Why am I discussing strategy at a time like this?
We are becoming a post-democracy.

However, the historians warn, particularly in the wake of the coronavirus pandemic, “the temptation to take refuge in a figure of arrogant strength is now greater than ever”. They suggest citizens must be ready not only to defend democracy at the ballot box, but “if necessary, also through non-violent protests in the streets”.

“That’s the lesson, to not be complacent in moments like this,” said Jennifer Evans, a professor of German history at Carleton University in Canada and one of the lead organizers of the open letter. “This is a very dangerous time, and we all have a responsibility to prop up democracy.”

James Thomson's long poem The City of Dreadful Night is the Bible of pessimism. In one scene, the protagonist -- wandering through the city on a sleepless night -- stumbles across the entrance to Hell.
I reached the portal common spirits fear,
And read the words above it, dark yet clear,
"Leave hope behind, all ye who enter here:"

And would have passed in, gratified to gain
That positive eternity of pain
Instead of this insufferable inane.


But the gatekeeper won't let him enter. Our protagonist cannot abandon hope because he had none to begin with. Hope is, in a sense, Hell's entrance fee. The poet's outlook is so dark, they won't even let him set foot in the Inferno.
That's me. Right now.
No, I am not trying to suppress the vote, and I'm not trying to persuade you to avoid the fight that will follow. I'm simply telling you how I feel. You may try to gag Despair, but Despair will find a voice.
posted: 1:24 PM