I’m telling you. The GOP wants ES&S to control 70% of the voting machine market again. Dominion is what broke up ES&S’s near monopoly. ES&S systems have vanished black votes in GA & TN. ES&S misled about remote access & internet connectivity to its systems. It is GOP connected. https://t.co/gqt14Ku8Ab

The tweet embedded above will prove very important to today's post. But before we discuss Dominion and ES&S, I want to mention something else.
Unpardonable. Carl Bernstein names 21 Senators that have privately turned against Trump. In response, Marcy says:

Yaknow, if all these GOPers are opposed to Trump burning the country down over the next two months, maybe Dems should launch impeachment in the House again so they can shoo Trump out before he gets more people killed.

Yeah, but impeaching Trump would usher in the brief but glorious reign of Mike Pence, who would be positioned to give Donald Trump the Gerryfording he craves. If Trump stays in office until the bitter end, he might pardon himself -- but the legality of a self-pardon is open to question.
Sidney failure. Unfortunately, I was kept away from the keyboard yesterday. I now feel obliged to say something about that surreal melodrama starring Sidney Powell, the Kraken-unleashing legal krak-pot whose conspiratorial blatherings caused her to be dismissed from Team Trump.
(Was she ever truly on Team Trump? I guess she had "Shroedinger's lawyer" status.)
As you may recall, she announced that Dominion -- the new bete noir of the right -- is the creation of an international "communist" conspiracy involving every country she doesn't like plus the Clinton Foundation. And, of course, George Soros. They've always gotta get George in there, don't they?
Her claim about the Clinton Foundation was particularly hilarious. In 2014, Dominion donated free services to certain developing countries in response to a Clinton Foundation project. In Sidney's "mind" -- note the quotation marks -- this small bit of overseas charity means that Clinton runs Dominion.
Blame Evil Hillary! It's all her fault!
When Sidney tried to back up her claim that Hugo Chavez, dead these past seven years, is the secret architect behind Dominion's software, a citation went to -- of all people -- our old friend Brad Friedman. Ten years ago, Brad wrote an article which touched on Dominion. Naturally, what he actually wrote bears little resemblance to what Sidney thinks he wrote.
Brad's response to her nuttiness is absolutely hilarious.
Sidney said that the software had an "algorithm" to switch votes from Biden to Trump "which we might never have uncovered had the votes for President Trump not been so overwhelming in so many of these states that it broke the alogorithm that had been plugged into the system, and that's what caused them to have to shut down."
What the hell does that even mean? Sidney seems to be describing that old episode of The Prisoner in which Patrick McGoohan causes a computer to go haywire by asking an insoluble question: "W...H...Y?"
Also see this point-by-point AP rebuttal.
If Sidney has any evidence for this sick fantasia, why hasn't the evidence appeared in any legal filing? Why couldn't she offer the proof to Tucker Carlson, a friendly news figure? This "all talk, no substance" approach has even managed to annoy Rush freakin' Limbaugh.
Obviously, Sidney never had anything to back up this blather. That's why those infamous Trump bus tire tracks are now decorating her pantsuit. This woman's mind is like...hell, I can't even think of a proper comparison. A blender full of platypus snot and cockroaches? That sounds about right.
And yet she passed the bar.
Jeez, I shoulda been a lawyer. Can't be that hard, if Sidney got in.
Computerized voting is awful, but only when Democrats win. The supremely annoying fact is that these straw-grasping Trumpers have suddenly discovered the evils of computerized voting systems. When real "clean election" crusaders like Brad Friedman or Jennifer Cohn (or, to a much lesser degree, your humble narrator) tried to sound that very same alarm sixteen years ago, we were castigated by the right. They called us conspiracy nuts.
Not long ago, the Republicans opposed the SAFE Act, which would have solved many of the problems posed by computerized voting systems. Specifically, the act would have mandated that all-important paper trail.
Incidentally, the system provided by Dominion in Georgia does offer a paper trail (though not an ideal one). Here's a recent tweet from Jim Sciuto:

WSJ Editorial bd. notes giant hole in Dominion conspiracy: “If soft­ware flipped Geor­gia’s elec­tronic to­tals, there would be some big, un­ex­plained dis­crep­ancy be­tween those data & the pa­per bal­lots. The hand re­count found noth­ing of the sort.”

For years, real election integrity advocates have argued against the paper-free election systems pushed by the Republican-linked firm ES&S, which still controls far too much of our democracy. The right has re-purposed those arguments and used them against Dominion, a company which does offer a paper trail.
That situation is insane.
I should mention here that Jennifer Cohn -- one of our finest advocates for transparent and fair voting systems -- still opposes Dominion's set-up, for reasons given here. (The link goes to a twitter thread from the end of October.) Even if we grant her point -- and I more or less do -- it is still the case that Dominion's system is far preferable to the trust-the-computer approach of ES&S.
Yet the GOP offers not one word of complaint about ES&S. Why not?
One could make a strong argument that computerized voting in ES&S-controlled areas of the country was rigged in Trump's favor, not Biden's. After all, the pre-election polls had Biden winning by a more decisive margin.
Biden might not have prevailed at all if the pandemic had not encouraged so many Dems to vote by mail. Mailed ballots create a paper trail. The virus may have saved democracy.
Side note: Why were the polls so wrong? The commonly-heard answer usually involves some vague guff about landlines being replaced by cel phones. But pollsters the world over have been dealing with this problem for quite a few years now, and only in this country do the polls consistently go wrong in ways that favor the right. In the UK, there are fairly wide polling errors each year, but those errors swing both right and left. In the US, polls go wrong in only one way, consistently "underestimating" the Republican vote.
This pattern suggests that the problem is not with the polls but with the voting machines. I do not discount the possibility that ES&S devices are rigged to deliver a pro-GOP result. Of course, the rigging is limited by plausibility. The butcher may place no more than one thumb on the scale; any more weight would attract too much attention.
What to do. Trump's current cuckoo coup attempt may have a positive outcome: Biden should convene a bipartisan commission to improve our voting system.
If such a commission occurs, Dems cannot be inflexible. If the Republicans demand stronger voter ID laws -- well, that's a small price to pay. We absolutely must have a voting system that offers a verifiable paper trail in all major elections.
Besides, a properly-designed voter ID system could actually make it easier to vote. And wouldn't that be a pleasant change?
The Falun Gong connection. Those tracing Trump's "rigged election" propaganda push have given insufficient attention to the role played by Falun Gong, the dangerous Chinese cult opposed to the Chinese government.
(This should go without saying, but I'll say it anyways: It is possible to oppose both the cult and the Chinese government. In 1970, Charlie Manson disliked Dick Nixon -- and sensible people disliked both.)
Falun Gong runs a heavily promoted television/YouTube network called NTD, which stands for New Tang Dynasty. If you're on the left, you're probably unaware of their videos -- but if you're on the right, these offerings are inescapable. NTD propaganda is a big reason why so many Republicans sincerely believe that Biden stole the election.
When -- yes, I allowed myself to say "when," not "if" -- Biden takes charge, there must be an investigation of Falun Gong. The images below should give you an idea of what the cult has been pushing on YouTube. (Click to enlarge.)
These guys are still big fans of Sidney Powell, it would seem. Is she linked to this group financially? Where is Falun Gong's money coming from? 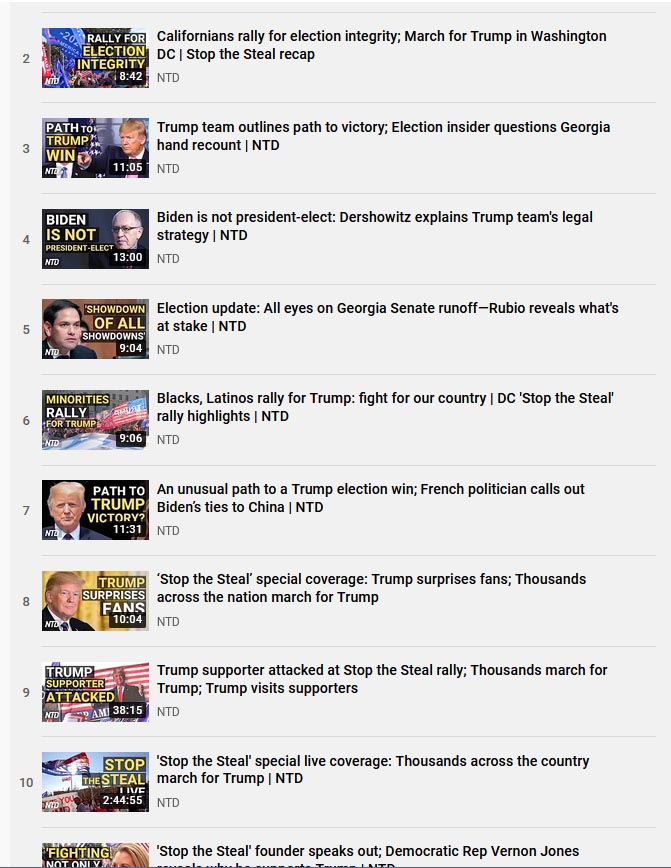 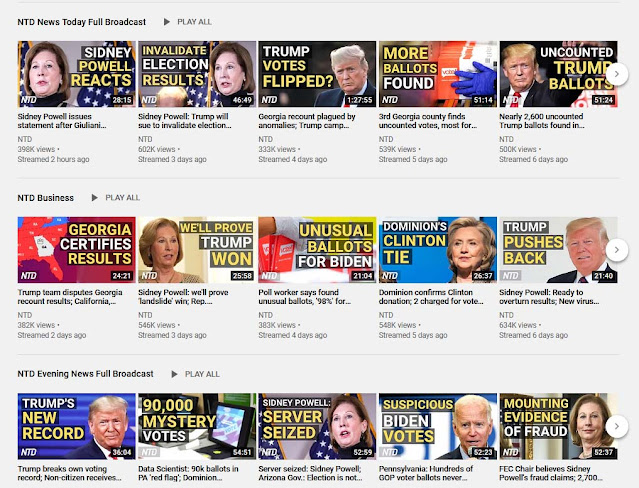