You know, I'm not a drinker. But when the NYT released its bombshell story yesterday, I decided "This is it. VT DAY!" Celebration seemed to be in order. Boy howdy, did I celebrate.

And now here we are. The day after. Did a tectonic political shift occur? Apparently not. MSNBC is still running endless stories about coronavirus, as usual. The right is still trying to smear Hunter Biden, as usual.

Everybody seems resigned to the fact that Trump's supporters will not desert him despite the new revelations. It's a story about money, and most people know nothing about money.

Trump himself is simultaneously complaining that the NYT received the documentation illegally and that the stories are "Fake news." His dimwitted followers do not understand, will never understand, that the documents can't be both fake and illegally obtained.

The naivete of the average American is very dangerous. People still believe that The Apprentice was real, even though the whole thing was an obvious sham.

Is Trump really rich? Why would a billionaire do a silly TV show? The money Trump made from the show was invested in poorly-run businesses. Some of his businesses appear to be money-laundering operations.

The fascinating opening chapters of Michael Cohen's Disloyal portrays Trump as a millionaire (or maybe a thousandaire) pretending to be a billionaire. Noel Casler, Trump's personal assistant on The Apprentice, has said that the producers had to rent new furniture because Trump's stuff was so shabby.

After the NYT released its bombshell article, pundits on teevee kept repeating that Trump has an impending debt of $300-$400 million. Dan Alexander, an investigator at Forbes, shows hard documentation which proves that Trump actually owes more than a billion, and the bill will come due pretty damned soon.

(Turns out Alexander has yet another Trump book for us to read before election day: White House Inc.: How Donald Trump Turned the Presidency Into a Business.)

In today's Forbes piece, Alexander argues that Trump really is a billionaire -- technically -- though he's not worth the $11 billion he has claimed.

Don’t be fooled: The news is not that the president is broke (the Times story notes that tax returns do not list someone’s net worth). The news, instead, is that Donald Trump seems to have avoided paying much in taxes despite significant operating profits at certain properties. In other words, he figured out how to share very little of his fortune with the country he now leads.

Maybe so, but Trump isn't that rich.

In fact, Trump is a multibillionaire, worth $2.5 billion, by our count. His portfolio, which includes commercial buildings, golf properties and branding businesses, is worth an estimated $3.66 billion before debt. The president has a fair amount of leverage—adding up to a roughly $1.13 billion—but not enough to drag his net worth below a billion dollars.

Despite Alexander's expertise, I'm not convinced. The tales told by Cohen and Casler speak of a poseur, not a powerhouse.

That $1.13 billion appears to be roughly the same amount he owes, or so I gather from Alexander's earlier thread. I'm sure that Trump has some money, though how much remains open to debate. But I'm also sure that Trump needs a good deal more, or the whole edifice may come crashing down.

That's why he engaged in cheesy money-raising schemes like his attempt to move the British Open to his golf course in Scotland, or his attempt to hold the Group of Seven summit at his Florida resort. If his fortune were secure, he would have avoided that sort of cheesiness.

We return, as always, to the old question: How much does he owe to Putin? The Russian links still tantalize.

The Times account did not specify who Trump’s creditors are and sheds little light on his business connections with Russia. It did note that he made more money from holding the Miss Universe pageant in Moscow in 2013 — $2.3 million — than from any other pageant. That money came from the Agalarov family, which is close to Russian President Vladimir Putin, and which lost $10 million on the transaction.

This should serve as a reminder that special counsel Robert S. Mueller III refused to look into Trump’s financial dealings with Russia, which Trump said was a red line for him. That investigation still needs to be conducted. But even the bare facts revealed by the Times show why both former FBI agent Peter Strzok and former director of national intelligence Daniel Coats suspect that (as Coats told Bob Woodward) “Putin had something on Trump.”

What happened to all of that reelection money? The obvious theory is that Trump hoped to use his reelection campaign war chest to pay his debts. The campaign raised a billion dollars. One shudders to contemplate the question "Who donated?"

Yet Trump has nothing to show for it. The campaign is now broke.

Where did the money go? If it went into Trump's pockets, did he declare it as income?

An investigator named Brendan Fischer looked into the Trump campaign's financials for August. Seventy-five percent of the money went to an LLC called American Made, set up by "senior Trump officials." (This probably would include Brad Parscale.) From there, the money just...disappeared.

Long Island mystery. But it gets worse. Here's a story from a few days ago that few noticed: The Trump campaign has  been sending an awful lot of money to a post office box in Hicksville, Long Island. That's a rather affluent suburb. Why is the money going there and who is receiving it?

Mention of Long Island naturally made me think of Charles Gucciardo, a lawyer who happens to be a big Trump supporter. His name came up during the Ukraine scandal. Remember that?

I am sure you recall Lev Parnas, who was allegedly Rudy Giuliani's client, though he seems to have been more of a paymaster. Although Lev was hurting for cash, he somehow got a half-million into Rudy's pockets. Rudy used that money to pay for his dubious Ukraine "investigation."

Where did Lev's money come from? From Charles Gucciardo of Long Island.

Chuckie invested in a not-terribly-promising company started by Lev Parnas. That company, which bore the marvelously fragrant name Fraud Guarantee, was a godsend to late night comics. The concern seemed to have the word SCAM written all over it. 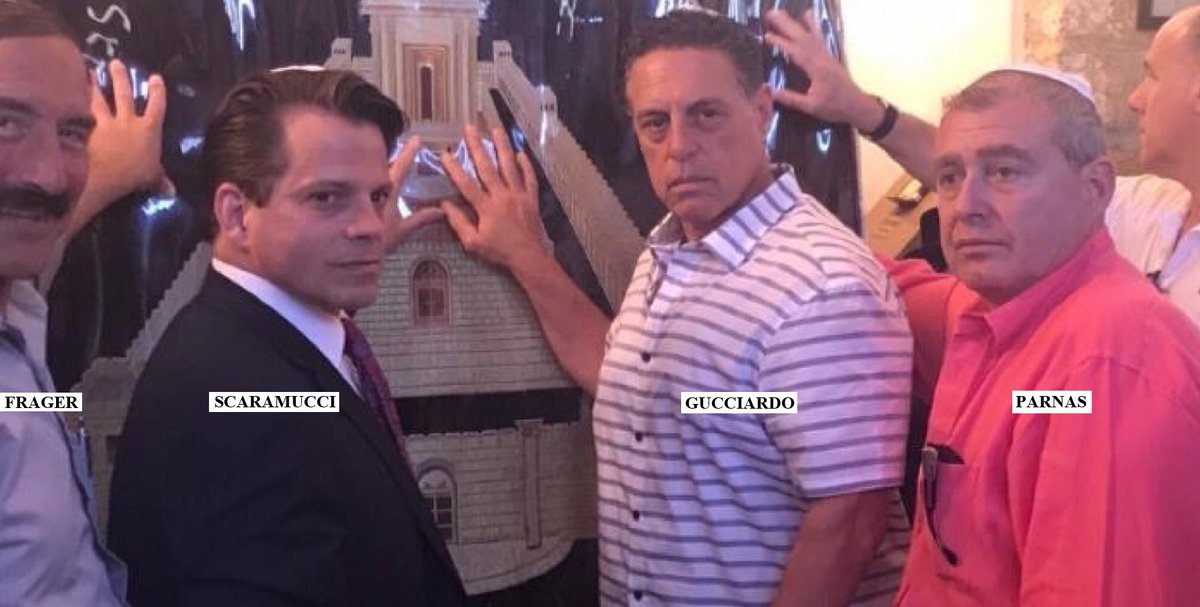 Turns out they were quite a tight crew -- Anthony Scaramucci, Lev Parnas, Charles Gucciardo and Rudy Giuliani. The first three went on a trip to Israel together, as seen in the accompanying photo.

Lev and Mooch have switched sides. They've had their fill of Trumpworld machinations. Lev keeps promising some grand revelation -- but so far, he has not delivered. (At this writing, he has yet to comment on the NYT's story.)

Mooch seems particularly approachable. Perhaps someone can ask him: Do you think that Charles Gucciardo is the fellow who picks up the mail at P.O. Box 1926 in Hicksville, Long Island?

If you fire up Google Earth, you'll see that Hicksville isn't that far from Gucciardo's office. Seems like the kind of area where a lawyer like that might buy a home. Just sayin'.

In this story, I speculate that Gucciardo may have links to Russian oligarchs -- specifically to Dmitrty Firtash, who can definitely be tied to Trump. I believe that Firtash is also tied to the Mogilevich crime syndicate, the most dangerous criminal organization in the history of the planet.

Please understand: I am not saying that Gucciardo is in with the Russians. I have seen no proof to back that claim. But allow me to repeat some points made in that earlier post...

The Russians became masters of that particular scam.

In the past, one lawyer who profited from this scam was none other than Donald Trump's former bagman, Michael Cohen.

A Rolling Stone investigation found that Cohen represented numerous clients who were involved in deliberate, planned car crashes as part of an attempt to cheat insurance companies. Furthermore, investigations by insurers showed that several of Cohen’s clients were affiliated with insurance fraud rings that repeatedly staged “accidents.” And at least one person Cohen represented was indicted on criminal charges of insurance fraud while the lawsuit he had filed on her behalf was pending. Cohen also did legal work for a medical clinic whose principal was a doctor later convicted of insurance fraud for filing phony medical claims on purported “accident” victims. Taken together, a picture emerges that the personal attorney to the president of the United States was connected to a shadowy underworld of New York insurance fraud, a pervasive problem dominated by Russian organized crime that was costing the state’s drivers an estimated $1 billion a year.

For more on the Russian angle, see this 2003 story, originally published in Fortune.

Investigators have also found evidence of other serious crimes allegedly committed by members of the ring, including money laundering and extortion. Many of those indicted are Russian emigres, and some of the illicit funds have been tracked to large corporations in Russia. Prosecutors refer to the investigation as the "Boris" case--an acronym for Big Organized Russian Insurance Scam.

(Cohen doesn't talk about this stuff in his book. I think he knows better than to cross the Russian mob directly.)

Let's bring the discussion back to the Trump campaign.

Either way, I can easily understand why Brad Parscale -- until recently, Trump's campaign manager -- appears to have lost his reason, at least temporarily. According to one news report, he has been acting strangely for the past two weeks.

These machinations would put anyone under a lot of stress. Human beings simply are not built to withstand that kind of pressure.