Hi! It's Mr. Pessimism. I'm here to tell you what's going on outside of the prog bubble.

A few days ago, we got our first "Don't freak out about that poll" post on Democratic Underground. A Harris poll suggested that the winds had shifted, that Biden's number was starting to drop. "Outlier!" cried the DUmmies. "Bad polling methodology!"

If 2016 taught us anything, it taught us this lesson: When a DUmmy or a Kossack tells you "Don't freak out" -- freak the fuck out.

The enforced optimism on those sites is a form of brainwashing. Selective information makes progs think that they are more numerous and more popular than they actually are. That's why 2016 came as a surprise to so many (though not to me).

The truth: Biden's lead is slipping. Although the headline of this article -- "Biden Is Polling Better Than Clinton At Her Peak" -- seems reassuring, the featured chart is anything but. Study it: 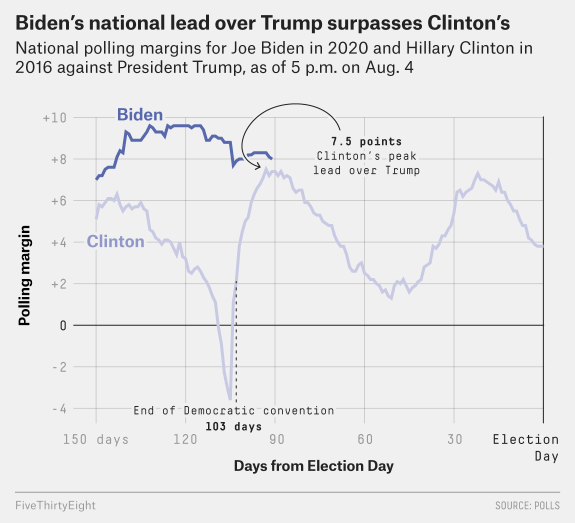 1. Biden's lead right now is nearly equal to where Hillary was a mere twenty days away from election day. This, before the smears hit Biden. (In mid-October 2016, Hillary was the most smeared human being in American history.)

2. On election day, Hillary had a nearly four point lead in the national polls. Thanks to the magic of the electoral college -- combined with subtle vote-rigging in key precincts in key states -- that four point lead turned into a Trump victory. Thus, Biden must stay well above four points nationally.

Not long ago, he was at nearly ten; now, he's below eight. Wrong direction.

Why is Biden losing steam? Because the George Floyd moment is over. The backlash has begun.

Let's face it: BLM blew it. During a moment of widespread national sympathy for the cause of black people, the movement focused on sure-loser ideas such as defunding the police -- a proposal opposed by the vast majority of black people (and never mind what whites think about it). The protestors assailed Mount Rushmore, Abraham Lincoln, Columbus and even the American revolution itself. Not the path to popularity.

Black Lives Matter could have used this moment to demand fair and clean elections. They could have decried caging and other scurrilous tactics designed to suppress the black vote. (If elections in Georgia were fair, Stacey Abrams probably would be governor right now, and might even be on Biden's VP short list.) A "fair vote" movement would have been indisputably righteous and probably would have garnered widespread white support, since many whites also mistrust the mechanics of democracy.

Did you hear any leaders of Black Lives Matter refer to our unfair elections? I didn't.

Instead, BLM leaders (or rather, alleged BLM leaders: See below) pressured the government of Portland to cancel a screening of Kindergarten Cop, on the grounds that Arnold Schwarzenegger's utterly inoffensive movie is -- get this -- racist. Seriously. They compared it to Birth of a Nation.

That idiocy alone probably caused the Dems to lose a point.

I am sure that there are African American intellectuals who will argue at great length that Kindergarten Cop is indeed an insufferably hate-filled piece of cinema. Since casuistry is my favorite form of humor, I look forward to hearing their argument. Perhaps they will amuse me further by defending the "brilliant" strategic move of attacking a silly movie while ignoring the longstanding and continuing assaults on black voting rights.

In the end, Portland and Seattle became wins for Trump. Even the NYT has finally admitted it: All of the assurances we've heard about the peacefulness of the protests were nothing but propaganda.


That has left small-business owners as lonely voices in progressive areas, arguing that police officers are necessary and that cities cannot function without a robust public safety presence. In Minneapolis, Seattle and Portland, Ore., many of those business owners consider themselves progressive, and in interviews they express support for the Black Lives Matter movement. But they also worry that their businesses, already debilitated by the coronavirus pandemic, will struggle to survive if police departments and city governments cannot protect them.

You want to see what happens when small business owners are afraid to open up shop? Walk -- as I have walked -- through the most challenged sections of East Baltimore. Note the hand-painted signs proclaiming "THIS IS A NO-SHOOTING ZONE." How the hell do African Americans benefit from that environment?

Nazis posing as antifa. The above-cited NYT article contains strong hints that the BLM protests in Seattle were manipulated by white supremacists (as occurred in Richmond, Virginia). From the NYT:


Young white men wielding guns would harangue customers as well as Mr. Khan, a gay man of Middle Eastern descent who moved here from Texas so he could more comfortably be out. To get into his coffee shop, he sometimes had to seek the permission of self-appointed armed guards to cross a border they had erected.

“They barricaded us all in here,” Mr. Khan said. “And they were sitting in lawn chairs with guns.”

Mr. Hearns has had bad experiences with the police in his own life. He says he wants police reform, but he was appalled by the violent tactics and rhetoric he witnessed during the occupation.

He blamed the destruction and looting on “opportunists,” but also said that much of the damage on Capitol Hill came from a distinct contingent of violent, armed white activists. “It’s antifa,” he said. “They don’t want to see the progress we’ve made. They want chaos.”

Was it antifa? The girly-voiced antifa spokes-wussies I've seen on newscasts looked like ineffectual twits who couldn't intimidate a kitten.

I suspect that we are dealing with another "wolf in sheep's clothing" situation, just like the one we saw in Richmond. One thing is certain: These "white sympathizers" have a strange tendency to make life miserable for black people, Muslims and similar groups.

In fact, there's a documented history of white supremacists posing as antifa online. In early June, we saw a flurry of new stories to that effect, such as this one.


Twitter has disabled an account that appeared to represent a violent antifa group after it was determined to be a bogus front for a white nationalist group.

The account, with the handle @ANTIFA_US, was traced back to be a false facade for the white nationalist group Identity Evropa. It was specifically called out by U.S. law enforcement as an example of a left-wing radical group attempting to incite violence amid the unrest and nationwide protests.


Yet the leaked materials show that on May 29, two days before Trump tweeted that antifa would be labeled a terrorist organization and Barr issued his DOJ statement, the president’s own DHS analysts issued an open source intelligence report detailing how a white supremacist channel on Telegram, an encrypted messaging service, was encouraging followers to capitalize on the unrest by targeting the police with Molotov cocktails and firearms.

A couple of months ago, Boogaloo Bois infiltrated a protest by posing as medics.

Here's a headline from last June which should not be forgotten: A man charged with killing a federal officer during George Floyd protests is tied to the far-right 'Boogaloo' movement, authorities say.


Law enforcement officials said Carrillo and Justus went to Oakland to kill police officers and believed that nationwide protests against police brutality following the death of 46-year-old George Floyd would facilitate their motives.

The charges in Carrillo's and Justus' cases come amid multiple instances of individuals associated with the far-right being accused of trying to stoke violence connected to the demonstrations against police brutality.

Earlier this month, three men who were self-proclaimed members of the "Boogaloo" movement were arrested on domestic terrorism charges and accused of carrying unregistered firearms and trying to spark riots during the demonstrations.

According to the charging document, which was reviewed by Business Insider, the three defendants previously served in the US Navy, US Army, and US Air Force.

Politico also reported this month that a Department of Homeland Security intelligence note warned law-enforcement officials that a white supremacist channel on the encrypted messaging app Telegram encouraged its followers to incite violence to start a race war during the protests.

Citing the FBI, it said that two days after Floyd's death, the channel "incited followers to engage in violence and start the 'boogaloo.'"

The Boogaloo Bois -- who want a new civil war -- genuinely seem to hate the police even more than BLM leaders do.


The “Boogaloo Bois” expect, even hope, that the warmer weather will bring armed confrontations with law enforcement, and will build momentum towards a new civil war in the United States.

Open source materials suggest that, for now, the apocalyptic, anti-government politics of the “Boogaloo Bois” are not monolithically racist/neo-Nazi. As we have observed, some members rail against police shootings of African Americans, and praise black nationalist self defense groups.

But the materials also demonstrate that however irony-drenched it may appear to be, this is a movement actively preparing for armed confrontation with law enforcement...

BLM leaders should understand: Despite the very real problem of racism, law enforcement officers also prevent neo-Nazis from carrying out an armed takeover. That's why the fascists would love to see BLM defund and demoralize the police.

(In the 1920s, the Nazis were similarly anti-cop. They viewed themselves as outsiders because they were outsiders, dismissed as unimportant fringe-dwellers by short-sighted mainstream writers. The fascists also supported oppressed peoples when doing so served their purposes. That's why Nazi rallies in the United States often featured American Indians on stage.)

How to spot the new Nazis. For a while, I've wondered why the Boogalooers have fixated on Hawaiian shirts. It turns out that members have used "Big Luau" as a jokey euphemism for "Boogaloo," which is itself a code word for a new Civil War.

Here's another euphemism to look out for: "Icehouse." That phrase derives from "Big Igloo," which also sounds like "Boogaloo." These word games make America's fascists feel ever so clever.

Another identifying mark is a patch with "/k/" written on it. This sigil refers to the gun-owners' discussion board where the Boogaloo movement began.


Yet like most outlets, ABC News missed the significance of other men wearing Hawaiian shirts, and, in at least this case, a skull mask balaclava complete with a clown nose.

While the Hawaiian shirt referenced “the boog”, and the skull mask referenced siege culture, the nose was very likely a nod to the “clown world” meme.

The “clown world” meme signals the idea that pluralistic, multicultural liberal democracies are both inherently ridiculous and doomed to failure. It is common currency among racist movements, and is a more pessimistic, or “blackpilled” variation on the “pepe” memes which were exchanged so freely during the heyday of the alt right.

It signifies a rejection of the “movementarian” approach of pre-Charlottesville white nationalists, and the belief that there is no political solution to what many accelerationist groups see as the interminable decline of western democracies.


You should read the rest of that article. It spells out how Boogaloo -- an inherently racist ideology -- cleverly uses inclusive, pro-BLM language and imagery in order to spur black people toward committing acts of violence.


As protests over the death of George Floyd heated up in Minneapolis on May 26th, members of Boogaloo groups across Facebook considered it a call to arms. Memes were churned up that day, adding George to the movement’s list of martyrs

Boogaloo and BLM: Are they aligned by ideology? By a common enemy? Or is this a case of infiltration and manipulation?

In the past, I've likened this hellish alliance to George Lincoln Rockwell's endorsement of the Nation of Islam. I think that the Boogalooers want black people to upend law and order -- to create the chaos which will allow the fascists to take power. And when the fascists do take power, they will treat America's blacks the same way Hitler treated the Jews.
posted: 2:46 PM