The family of federal judge Esther Salas was attacked by a gunman dressed as a Federal Express delivery driver. Her 20 year-old son was killed; her husband has been critically injured. The internet has taken note of the connection to the Jeffrey Epstein case.


More recently, Salas has presided over an ongoing lawsuit brought by Deutsche Bank investors who claim the company made false and misleading statements about its anti-money laundering policies and failed to monitor “high-risk” customers including convicted sex offender Jeffrey Epstein.

That lawsuit is just as likely to lead to Trump; we've all heard the allegations that Trump properties have been used to launder money. Deutsche Bank, or a shady subsidiary thereof, has lent to Trump when no other bank would do so.

Right-wing Twitterati are focused on the Epstein connection. They're practically shouting: "Clinton did it! Clinton did it!" Of course, rightists shout those same three words whenever the dog soils the rug or someone scratches the car.

Worth noting: Right-wingers do not seem to fear that this trail could lead to Trump.

Added note: In the original version of this post, I noted that the shooting increased the national paranoia over the Epstein case, and I argued that creating this outcome was the killer's purpose. We now know that the shooter was a maniacal right-wing lawyer upset over an unrelated case. Since my presumption about his motive was wrong, I've excised those paragraphs. Please accept my apologies for offering a theory prematurely; my error is not excused by the fact that many others also jumped the gun.

Virginia Roberts Giuffre and the great sexual blackmail conspiracy. I began writing about Epstein before most bloggers had heard of him. For years, I was convinced that Epstein really was party to (or mastermind of) a conspiracy to acquire kompromat on VIPs. My conviction was founded on a bedrock belief in the credibility of Virginia Roberts Giuffre, the originator of the "blackmail" allegation.

In her Complaint, she referenced Bill Clinton, though she does not say that she had sex with him. Elsewhere, she mentioned Al Gore.

Actually, she did more than mention Al Gore: In an interview with the Daily Mail, she offered a detailed description of Al and Tipper Gore's supposed visit to Epstein's island in the year 2000, while Al Gore was running for president. She described seeing him walk on the beach with Epstein. Virginia -- born August 9, 1983 -- told the newspaper: "I was planning to vote for him when I turned 18. I thought he was awesome."

Yet no such visit ever took place according to Secret Service records, which also exonerate Bill Clinton. Former FBI Director Louis Freeh filed an FOIA request with the Secret Service and found no record that either man set foot on that island. (I've carefully checked Epstein's flight logs, which never indicate that Clinton went to the island. All of the flights on Epstein's jet involved public events covered by the media.)

Virginia also lied about her age. At first, she had the world convinced that she entered Epstein's world at the age of 14. She even described a "sweet sixteen" party that Epstein threw for her -- a party which culminated in unlawful sex.

But that whole tale was a lie. In fact, she took up with Epstein at the age of 17, at the earliest. According to her revised story, she did not have sex with anyone else in Epstein's orbit until she reached the age of 19. Any sex she had at that age was legal. (17 is legal in New York; 18 is legal in Florida; 16 is legal in the Virgin Islands and in the UK.)

And before you say the obvious: Yes, the idea of a man in his 50s having sex with someone so young is sickening, even if the relations were technically within the law. Nobody is making excuses for Epstein.

Nevertheless, the age of consent matters. Why? Because Giuffre described a blackmail operation involving underaged girls.

An illegal sex act is "blackmailable." A legal act is not. Not these days.

Consider: Virginia originally claimed that she had sex with Prince Andrew at the age of 15. We now know that she was 19 -- if the episode actually happened. Thus, whatever your attitude toward Andrew, anything he may or may not have done with her was within the law.

Did he have sex with her? He denies it. Right now, the only evidence that he did is the testimony of Virginia Roberts Giuffre.

Here is my main point -- or rather, my main question:

If we subtract the claims of Virginia Roberts Giuffre -- and those of Sarah Ransome, an even more flagrant liar -- from the Epstein controversy, what evidence do we have that Jeffrey Esptein ran a blackmail operation involving VIPs and underaged girls?

Right now, I see none. None.

Yet many within the media continue to rationalize the many lies told by Virginia and Sarah, the two "stars" of Filthy Rich, a recent Netflix documentary about Epstein.

One of the worst "rationalizers" is the over-praised journalist Julie K. Brown. On Twitter, she has excused Virginia's lies with the usual pseudo-scientific blather: Studies prove that trauma victims have difficulty recalling details... Of course, she never cites an actual study. Neither Julie Brown nor anyone else will ever point to a single piece of academic research which adequately explains Virginia's whoppers involving Al Gore or that "sweet sixteen" party.

I heard the exact same "trauma" excuse repeatedly during the early 1990s, when I tried to write a book about Satanic Ritual Abuse claimants. For years, I convinced myself that these women were telling the truth. Eventually, I had to concede that they were fantasists, and that their advocates had fallen prey to the logical fallacy known as petitio principii.

I now find myself -- and not for the first time! -- forced to take a very unpopular position.

A sensational theory has ignited the imaginations of millions of Americans: Jeffrey Epstein and Ghislaine Maxwell ran a sex sting operation involving the underaged. Having belatedly understood the truth about Virginia, I must now sound a warning: The evidence for such an operation simply is not there. Not at present. We may receive proper evidence in the future. Or we may receive cleverly fabricated evidence. But at this writing, the whole scenario rests on the word of two fabulists.

Do I need to say the obvious? Times being what they are, I suppose I must: I am not excusing Jeffrey Epstein.

The original testimony gathered by Florida officials was absolutely damning. But if you read that evidence -- in Patterson's book Filthy Rich, and in the original documents available via Scribd -- you'll see no hint of a blackmail operation involving VIPs. The real victims told the cops that they serviced Epstein and Epstein only. No mention of Prince Andrew or Bill Clinton or anyone else. Also: No mention of Virginia Roberts or Sarah Ransome.

(Although the documentary Filthy Rich and James Patterson's book Filthy Rich share the same name, the book is much better.)

At the beginning of Part 4, we see footage from an interview that Brad Edwards (Virginia's first attorney) conducted with Jeffrey Epstein, who at first pretends not to recognize Virginia's name. Edwards asks: "Isn't it true you celebrated her 16th birthday with her and had sex with her on that day?" Epstein indicates that he'd love to answer the question, but his lawyers have advised him not to. When asked whether he forced her to have sex with others, Epstein momentarily forgets his lawyers' advice and blurts out: "Are you kidding?"

Question: Why is Brad Edwards no longer representing Virginia Roberts Giuffre? Is it possible that Edwards wants no further association with a fantasist?

I turned against Virginia once and for all when I read the affidavit of her former boyfriend, one Anthony Figueroa -- a document included in this post. (Click to enlarge.) This document proves:

1. Virginia had complete freedom of movement. She was no "sex slave." She lived apart, in her own apartment.

2. Virginia was an adult during most of the time she worked for Epstein.

4. Virginia described meeting famous people, but not having sex with them. At no point did she describe a blackmail operation. 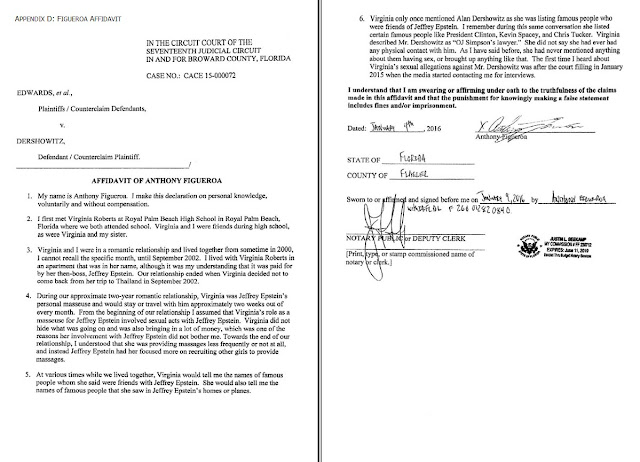 The truth about Sarah. I can't think of a non-vulgar way to make the following point, so I'll just say it. Despite his current status as America's most notorious perv, Jeffrey Epstein wasn't much of a fucker.

The Patterson book makes this point very clear. Testimony from the Florida victims -- the real victims -- clearly indicates that Epstein almost never became fully erect and was rarely capable of vaginal intercourse. For obvious legal reasons, the investigators paid close attention to claims of vaginal intercourse; after interviewing dozens of girls, they found only four instances. Most of the time, Epstein pleasured himself while young females massaged him. When he trusted a girl sufficiently, he would touch her private parts with one hand while using the other on himself.

And that, usually, was it. That was his idea of sex.

Victim testimony demonstrates that he lost interest in girls once they passed the age of 19. Although his actions constituted statutory rape, the victims never accused him of forcible rape. (One girl said that he grabbed her hair roughly.)

Yet Sarah Ransome, who was 22 when she met Epstein, claims that Epstein violently raped her regularly. In one particularly outlandish account, Ransome insisted that Epstein raped her three times in one day, and that she made a daring escape the same day by literally swimming with sharks. The New York Post has long possessed evidence that Ransome is a liar, but has refused to publish it.

In 2016, Ransome announced that she possessed "sex tapes" involving Hillary Clinton and Donald Trump. She now admits that this story was a fabrication.

Ransome says that she was targeted for assassination by Hillary Clinton and the CIA. She also says that she (Ransome) was working with the KGB in 2016. Make of that what you will.

The makers of the Netflix documentary Filthy Rich knew all about the credibility issues besetting Virginia and Sarah, yet those problems remained hidden from the viewers. As a result, the film became The Virginia and Sarah Show. Unconscionable.

Sorry folks, but it is not sufficient to watch one documentary. You have to do some actual reading.
posted: 8:30 AM