Wow. I wasn't expecting that.

Basically, Joe Biden won the nomination yesterday. Okay, it's not a done deal: He could be undone by a MegaGaffe or a MegaScandal or a MegaPseusoscandal or just plain bad health. (Maybe this kind of bad health.) It's also conceivable that a Sanders blowout vote in an important upcoming state could give his campaign new momentum.

But let's face facts: Biden did spectacularly well, even in states where he had little-to-no campaign presence. He even won Texas, which polls had placed firmly in the Sanders camp. And he did it with no money.

Biden owes this astonishment to the African American voters of South Carolina -- specifically, to Congressman Jim Clyburn, whose moving and powerful endorsement speech had a huge impact on everyone who watched it.

I still maintain that the Democratic nominee (any Democratic nominee) stands little chance of winning in November, if only because the Trumpists can and will pull off any number of filthy tricks. They have impunity. Barr will do nothing against them, the FEC has no teeth, our intelligence agencies have been brought to heel, and Congress refused to pass legislation designed to protect our elections. To borrow a phrase from Natural Born Killers, the Republican ratfuckers live in "a cop-less town."

But at least Biden has a chance. Sanders doesn't.

Honestly, that's always been the basis of my case against Sanders. My feelings have little to do with policy and much to do with a cold assessment of a cultural reality. Sanders calls himself a socialist, and that label remains spectacularly unpopular. Ergo: Sanders doesn't have a chance.

Y'know what kind of people do vote? Older people vote. Black people vote. Jim Clyburn, an older black gentleman, made a very eloquent and dignified case for Joe Biden, and those words had the sort of impact one associates with Gabriel's horn.

Thanks to Clyburn, this nation may elect someone who understands that man-made climate change is real.

If so, then the history books may one day write that Jim Clyburn saved the whole damned planet.

Scattered thoughts. Ezra Klein sums up the situation well in a piece titled "Sanders can’t lead the Democrats if his campaign treats them like the enemy."


But it’s hard to move from treating the Democratic Party establishment with contempt to treating it like a constituency, and so far, the Sanders campaign hasn’t. On Tuesday, David Sirota, one of Sanders’s speechwriters, tweeted


I'm not moving to DC no matter what, so I'll speak a truth that's not allowed to be said:

Joe Biden is a full-employment program for the Beltway Democratic establishment. He makes sure that for them, nothing would fundamentally change. That's a huge part of why they support him.

"Not allowed to be said..." What a hilarious blowhard, little Davey is! As if writing those words required huge reserves of bravery! In fact, sentiments of this sort are utterly trite and familiar. If you offered Sirota a million dollar reward, he couldn't come up with ten consecutive words that any adult would consider novel or intriguing. The plow of predictability has cut deep ruts into that man's mind-field.


They will be replaced by a Vanguard of the Bernietariat. The best of the best trolls will command the heights of clickbait and trolling.

Klein goes on to quote this asshole:


If Biden wins the nomination, it will be a real lesson in how power works. Bernie was on track to win, Biden had no campaign, and they all knew it. So a few phone calls were made behind the scenes to Amy, Pete, Beto. Several million was put into a pro-Warren Super PAC. Voila!

To which one wit responded:


DEMOCRATS ENDORSING OTHER DEMOCRATS IS THE NEW RIGGING

Another response sounded a theme frequently encountered in this very blog:

Not "shouldn't of." Shouldn't have. Nevertheless, I agree with the point.

Do the BernieBros have any evidence for their Alex Jonesian exercises in conspiracy theory? Nope. Is it really so hard to believe that Amy, Pete and Beto support Biden because they think that Biden, unlike Sanders, can actually win?

The fucking Bros have got to stop telling themselves "IT'S A CONSPIRACY!" every time someone says "We don't like your guy." By this point, the Bros have nothing left but inchoate rage -- and in their fury, they've only managed to alienate every non-Bro.

Speaking of conspiracy theory: Klein notes that Bernie got the backing of Marianne Williamson -- who leads a cult that was almost literally born in a CIA laboratory, a cult whose website actually defends the indefensible MKULTRA scientists. You want a conspiracy, Bros? There's your fucking conspiracy. A real one. A provable one. 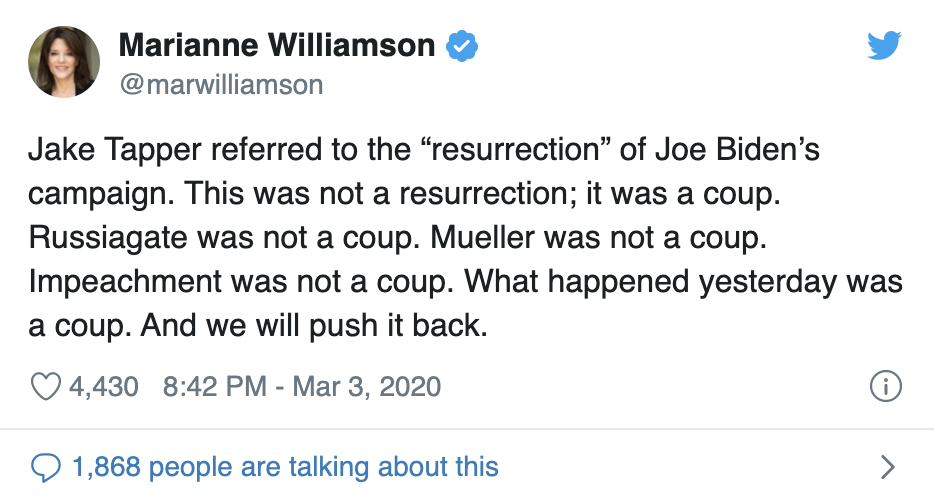 
This kind of thinking is a bigger problem for the Sanders operation than people realize: If you treat voters and officials in the party you want to lead as the enemy, a lot of people in that party aren’t going to trust you to lead them.