I'm starting to lean toward Bloomberg, even though he's the sort of candidate I usually despise, and even though I've complained about him in previous posts. Why? Here's why.

We need to unite to defeat Trump in November. This type of "energy" is not going to get us there. https://t.co/bPuUZMs2d6 pic.twitter.com/Tdp6mpWjcX
— Mike Bloomberg (@MikeBloomberg) February 17, 2020


This is precisely the sort of attack that Warren, Biden and Klobuchar should have launched months ago. We can no longer tolerate chickenshit tactics. We have to support someone who brings a nuke to a knife fight.

Why aren't all the candidates launching similar anti-Bernie campaigns? My only problem with this ad is that the listed examples of bad Bro behavior fly by too rapidly. Watch several times. Hit pause repeatedly. If your blood doesn't boil, you're either bloodless or a Bro. 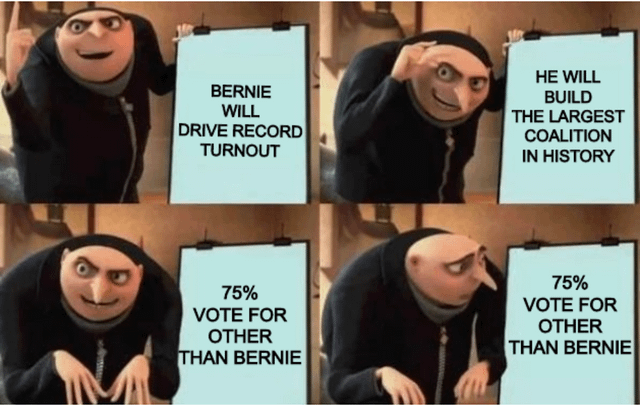 Bernie Sanders is 100 percent responsible for the disgusting online antics of his cultists. Charles Manson tried to argue in court that he bore no responsibility for the actions of his followers, but the law didn't accept that line of reasoning. We shouldn't let Bernie get away with the Manson defense.

The Bernie cult has been acting this way since 2016, and not once has Bernie Sanders made a serious effort to rein them in. Why hasn't he done so? Obviously, because Sanders wants his people to boycott the general election if he does not win the nomination. Sanders wants chaos and divisiveness.

Bro rhetoric is every bit as violent as Trumpist rhetoric. Whenever the Bros feel the slightest pushback on their horseshit, they scream for blood and stomp the floors and concoct conspiracy theories with all the wild abandon of a meth-addled Alex Jonesian. In Colorado, they committed an actual act of violence -- and the target was a black man. Get this: The Bros accused him of being racist!

And that's not all. Even though the zombies for Sanders tend to be very pale, they are actually trying to argue that the phrase "Bernie Bro" is a racial slur. The Berners are also heckling Pete Buttigieg for -- and I'm not making this up -- being hostile to the LGBT community. And of course, the Berners argue that Saint Bernie is better on feminism than either Warren or Klobuchar.

I predict that the Nevada caucus will go very sour. I predict violence and disinformation, followed by an organized Twitter smear campaign and by conspiracy theories galore. The Bernie Bros will do everything possible to split the Dems along every imaginable fault line.

Here are some numbers which demolish the claims we've heard about a grand coalition...


Of the 40+ swing districts Democrats flipped in 2018, not one was won by a "Justice Democrat," or any candidate campaigning on Medicare For All or Green New Deal. On the other hand, there are plenty of red-state Democrats who are anti-abortion, pro-gun, pro-coal, ...

Bernie claims he can inspire voter enthusiasm and turn out droves of college kids. But this would mostly run up the margins in states like California, Massachusetts, etc., not the ones he needs to win.

At the end of the day, he needs 270 electors to win the presidency; the popular vote is irrelevant. Clinton won 232. Flip Michigan (16) and Wisconsin (10) and that only gets to 258. Pennsylvania (20) could be flipped by a more moderate Democrat, but the coal mining & natural gas industries (which make up 20% of the state's industry!) aren't going to vote for the Green New Deal, period.

Ohio (18) is no longer considered a swing state. Florida (29) elected a Republican governor and senator in a D+10 wave year. Texas & Georgia likely won't flip yet. Arizona (11) is not enough to offset losing PA. Without these states, the path to 270 is even narrower...or perhaps nonexistent.


Bernie's success has thrilled the Republicans. They aren't at all worried about losing any of the states they won in 2016. In fact, they are seeking to flip purple states that went for Hillary. See here and here.

Thanks to the success of the Biden smear and the weakening of the Warren campaign, Trump now has 2020 in the bag. The real fight is downballot: The nomination of Bernie Sanders will destroy the Democratic brand across the board -- and not just in 2020, but for many elections to come. Goodbye House of Representatives!