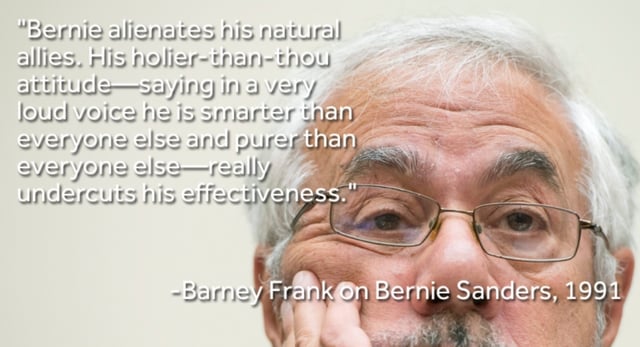 Before we get to our main item, we need to talk about Bernie. This blog will be doing that a lot until the vampire is finally staked.

That said: Part of me hopes that Bernie wins the nomination, because America's more fanatical progressives need to be discredited once and for all. Maybe that won't happen until we stage our own version of the Jeremy Corbyn disaster.

The latest news is that Bernie claims to be in good health, yet he won't release his medical records.

What bullshit! A man of his years who has had a heart attack is not in good health and never will be again. If you're in that position, the best you can say is "I'm in good health considering" or "I'm in relatively good health."

Am I being harsh? I'm being candid.

Bernie's refusal to be forthright about his medical records is just as Trumpian as his Russian troll army. Think about how his refusal will play out during a general election: The propaganda-pushers managed to convince the voters that Hillary was at death's door, even though she was actually in fine health. Bernie is not. Azrael follows us all, but the angel of death stalks Bernie Sanders more closely than he trails any other Democratic candidate.

A discussion of Bernie's bullshit on this blog contains a few choice items worthy of quotation here:


While it's normal for politicians in campaigns, to make lots and lots of promises, including ones bordering on impossible. Bernie's magic hat of policies, kind of blows me away that people fall for the breadth of his agenda with no true political rationale on how to achieve it. He always cops out and says it's a revolution. Like....that's a thing.

And if you question the Revolution, then you’re not pure enough and therefore deserve to be stomped on.

By the way, Reddit has effectively banned all criticism of Sanders. True, you are allowed to dis him all you want in a Reddit ghetto created for that purpose. But if you venture outside of that ghetto, you dare not utter one word against Saint Bernie.

"First they came for Comey."If you haven't seen it yet, this thread by Benjamin Wittes demands your attention.


First he came for @comey, and I said nothing because I was mad at @comey because of the Clinton email investigation and I blamed him for Trump’s election.

Then he came for Andy McCabe and I said nothing because there was this inspector general report that said McCabe lacked candor.

Then he came for Jim Baker and I said nothing because I had never heard of Jim Baker and the FBI director is entitled to his own leadership team anyway.

Then he came for @NatSecLisa and @petestrzok and I said nothing because they sent text messages and the president and Fox News kept reminding me that they had an affair.

Then he came for Bruce Ohr and I said nothing because that one was so deep in the weeds that it made my head hurt and maybe Bruce Ohr shouldn’t have been doing what he was doing anyway.

Then he came for Jeff Sessions and I said nothing because, shit, he was Jeff Fucking Sessions and it actually took Donald Trump to discover the one or two honorable bones in his body.

Then he came for Sir @KimDarroch, and I said nothing because he’s a British government official and I have no dog in a fight over how the UK staffs its embassies.

Then he came for Masha Yovanovich and I said nothing because ambassadors serve at the pleasure of the president and he can remove ambassadors for any reason or no reason at all.

And then he came for Lt. Col. Alexander Vindman and his brother, Evgeny Vindman, and I said nothing—because I was used to it.


Later, Wittes was reminded that he left Preet Bharara off this list. Since Wittes and Bharara are friends, the omission tells us that Trump's vindictiveness has been normalized and internalized. Living with Trump's barbaric behavior is like living on an island with a constantly-sounding foghorn: After awhile, one stops noticing the sound.
posted: 6:43 PM