By now, you've heard the news: Someone leaked the previously-secret information that Russia is helping Bernie Sanders win the Democratic primary. When asked about this, Bernie made a laudable statement denouncing Vladimir Putin. Of course, he had to say such words in order to remain viable to Democrats. 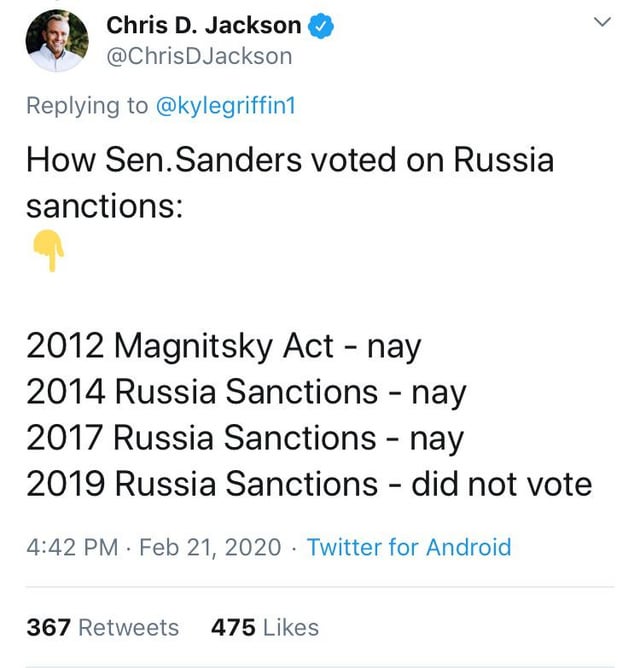 What bothered me was Bernie's admission that he first learned about Russia's help a month ago. In that time, Bernie Sanders has done nothing -- nothing -- to hinder or to denounce the Bernie-Bots who continue to spread lies and inane conspiracy theories about Bernie's opponents.

Not all of the Bros are Russians-in-disguise, but some of them clearly are, and they have been doing everything possible to heighten anti-Dem animosity. Whenever you encounter a Bernie supporter who seems to posses an inhuman level of rage and inflexibility, you're probably dealing with a troll or a bot.

That's how to spot a bot. Total intransigence is the big "tell."

Whenever I follow a comment thread featuring the musings of a political opponent, I look for evidence that I'm dealing with an actual human being. I look for statements such as "I understand your point of view, but you fail to take into account the following..." Real people use those phrases. Real people engage in the give and take of conventional argument.

Bernie's attack trolls don't do that. They are Terminators. Machines. Without mercy. Without tolerance. Without a single concession to the goal of post-convention unity. They have no logic or ethos beyond "Destroy all (Democratic) enemies."

No other Democratic candidate has followers who routinely behave in this vile fashion.

Are they Russian trolls? Come on. Use your common sense. Of course they are -- at least some of them are.

Again: Bernie knew about Russian efforts on his behalf a month ago. Even though he received the information in a classified briefing, he could have made that particular piece of intelligence public, according to Eric Swalwell.

That's why I am not even slightly impressed to hear Bernie Sanders say harsh words about Putin now. Sanders issued his anti-Putin statement only after a news story made such words politically necessary.

What Bernie should have done was solve the damn problem. He should have denounced the more obnoxious Bros a month ago. Hell, years ago.

Bernie did not act, and his inaction reeks of complicity.

Fighting back. The problem with "Terminator" style hate-trolling is that it forces opponents to return fire with equal or greater ferocity. No anti-Bernie Democrat wants to do that, for obvious strategic reasons. But the battle has been forced upon us. You cannot engage in rational debate with the Terminator; you can only toss him into molten ore.

Fact: Bernie Sanders cannot win the general election. If he were not the weakest candidate, Russia would not back him. Paul Ryan says that a Bernie nomination may insure that the GOP retakes the House, and I think he's right.


“As a Republican... I love the idea of a Sanders candidacy. It gets me excited about the down-ballot. I feel like we’d have a pretty good shot at the House (and) pad our majority in the Senate,” said Ryan, speaking on the campus of the University of Virginia in Charlottesville.

The Bros will, of course, refuse to admit the obvious. Like the Trumpers, they blind themselves to any evidence that conflicts with their cherished hallucinations.

Consider this bizarre statement on DU...


Why weren't the ruskies trying to help Bernie win in 2016? That's because they knew they had a better shot at beating Hillary.

Yeesh! The Mueller Report established that the Russians were helping Bernie in 2016. From the report:


Both the indictment and Mr. Mueller’s report quoted internal documents from the Internet Research Agency ordering operatives to attack Hillary Clinton’s campaign. “Use any opportunity to criticize Hillary and the rest except for Sanders and Trump — we support them,” the document said.

Even before the Mueller report came out, this humble blog frequently cited evidence that Russia helped Bernie in 2016.

Money. Here's another commonly-heard point which deserves to be addressed:


but of course...the Russian* oligarchs* have guaranteed hundreds of millions of dollars of loans for tRump*, not Sanders.

Bernie Sanders sits on a mountain of money, while every other Dem not named Bloomberg is struggling. How did that happen? The Bros will be quick to shout: "BERNIE ONLY TAKES SMALL DONATIONS!" -- but that defense is no defense at all.

Small donations are completely unregulated by the FEC, as a simple call to that agency will confirm. (To be honest, Trump has stripped the FEC of the power to do much regulation of any kind. You'll be lucky to find anyone in the office willing to take your questions.) A Russian oligarch can fill Bernie's coffers to Bloombergian levels, as long as the donations arrive in chunks under $100. A simple program could automate the task.

Bros against Bernie? Believe it or not, there are a huge number of Bros -- we may call them the Taibbi Berniecrats -- who have always denied that Russia interfered with the 2016 election. Example:


Shame on any Bernie supporter who becomes an unhinged conspiracy crackpot like @emptywheel because of vague, evidence-free Intelligence Community rumors -- as if such rumors do not have a humiliating track record in recent years. See?

Marcy notes that Bernie himself is now part of this "conspiracy" to spread the collusion "myth.' Of the preceding, she tweets:


Wherein the Bernie Boys accuse Bernie of being "an unhinged crackpot."

Another despicable "Taibbi Berniecrat" is, I am sorry to say, Max Blumenthal. I can't believe that I used to admire that guy. He has turned into a complete Putin sell-out. If I were his father, I'd disown him -- and I speak literally.


As I said in 2017 when few would listen, Russiagate would ultimately be used as a weapon against the left. This phony story spun out by the intelligence services proves my point. The tragedy is that Bernie has echoed Russia hysteria in a futile bid to mollify malign IC forces.

Bernie doesn’t understand that if you give the malign forces of the US deep state an inch, they will take a mile. Here he inadvertently validates a phony planted story aimed at painting him as the Kremlin’s favored candidate. They will keep coming for him.

Max, Max, Max. What can I say? Go fuck yourself with a rusty razor.

One should not argue with the purveyors of such nonsense, any more than one should argue with people who still believe in the reality of the Protocols of the Elders of Zion.

Speaking of revisionist history... Last night, Lawrence O'Donnell stunned me when he played a clip of Rush Limbaugh offering his latest variant of the Deep State conspiracy theory. According to Rush, the CIA and other Deep Staters foisted the Iraq War on a hapless, innocent George W. Bush. Apparently, the CIA forced Bush into a war he didn't want by faking up the evidence that Saddam Hussein possessed WMDs.

In the twisted byways of Limbaugh logic, this exercise in historical revisionism somehow "proves" that Russiagate is and always was a Deep State hoax.

In the first place: During the period in question (2002-2003), only liberals protested the run-up to war. Rush Limbaugh sure as hell did not. True, there were a few online anti-war articles written by the more honest libertarians, but no-one on the right mounted actual protests. They took no action.

Only those on the left organized rallies, such as the one which brought Barack Obama into the public eye. Not all liberals protested, but all protestors were liberals.

At that time, Limbaugh and other Republicans routinely questioned the patriotism of those protestors. Ann Coulter wrote an entire book called Treason which argued that any critic of W's march to war was probably a spy in the service of Saddam. To be consistent, she must now extend that paranoid accusation to Rush Limbaugh -- and to Donald Trump, who pretends that he opposed the war at the time (even though he provably didn't).

In the second place: The CIA (which is what Limbaugh really means when he uses the term "Deep State") under George Tenet resisted pressure from the White House to issue findings which claimed that Saddam had WMDs. From a 2004 LAT article:


Fiercely defending the intelligence community, CIA Director George J. Tenet on Thursday said his agency never warned President Bush that Saddam Hussein’s government posed an “imminent threat,” and the top spymaster backed away from several claims about weapons of mass destruction that the White House had used to justify the invasion of Iraq.

The Agency eventually sang a slightly different tune only because the Bush administration made it clear that Tenet had to get with the program if he wanted to keep his job.

Valerie Plame and Joe Wilson were part of what Trump calls the "Deep State." Look at what happened to them.

The CIA and the DIA both knew that "Curveball" (the Iraqi defector who promulgated those WMD claims) was unreliable. Similarly, the "Deep State" was quite skeptical of the so-called Italian letter, which asserted that Niger had sold hundreds of tons of uranium to Iraq. The letter traced back to a very "iffy" figure long considered notorious within Spookworld.

This faked evidence was pushed not by the "Deep State" (that is, the intelligence community bureaucracy) but by a number of ad hoc pseudo-intelligence groups which suddenly popped up within the Pentagon. The most devious of these groups was the OSP, which had strong ties to foreign agencies -- Mossad, Germany's BND, and Italy's SISMI. These far-right cells consisted of fanatics, analogous to today's Alt Rightists. They sneered at the establishment, and they did not care about the dispassionate analysis of the facts. They considered reality itself to be as malleable as Silly Putty. They saw intelligence as a tool which can be used to create a new reality.

The Downing Street memo proves that Limbaugh's revisionist history is a lie. From Wikipedia:


The memo, written by Downing Street foreign policy aide Matthew Rycroft, recorded the head of the Secret Intelligence Service (MI6) as expressing the view following his recent visit to Washington that "[George W.] Bush wanted to remove Saddam Hussein, through military action, justified by the conjunction of terrorism and WMD. But the intelligence and facts were being fixed around the policy."

It quoted Foreign Secretary Jack Straw as saying it was clear that Bush had "made up his mind" to take military action but that "the case was thin."

In short and in sum: The conventional intelligence bureaucracy did not force war on George Bush. In fact, substantial evidence indicates Dubya had decided on war long before he attained the presidency. It would be far more accurate to say that Bush forced the so-called "Deep State" to acquiesce to his lies.

Alas, mere history will not have any impact on Rush or his sheep-like listeners. Similarly, mere fact will never budge the biases of a Bernie Bro.

Can we halt Bernie? Maybe. Unless a new crisis pops up, I will devote the next post to my let's-stop-Sanders "recipe."