After sidestepping his moral responsibility to testify during the House impeachment inquiry, John Bolton now says that he wants to testify before the Senate. Why the change? His stated reasoning is as weak as coffee made from thrice-used grounds. Obviously, something else is going on.

It doesn't take more than a moment's thought to comprehend what that "something else" might be: Iran.

For ages, Bolton has been itching for regime change. He wants war the way a baby wants Mama's teat. And now Trump is giving him just what he craves.

Clearly, a deal has been cut; another quid, another quo. Trump is fulfilling Bolton's great desire, and in return, Bolton will fulfill Trump's great desire. What Trump wants is exonerative testimony designed to make the Dems look horrible.

I predict that Bolton will shout "Liar!" at Bill Taylor, Fiona Hill, Marie Yavonivitch and the others. Not only that: I predict that he will endorse a particularly nasty little conspiracy accusation that the Russians and the Alt Rightists have been cooking up. (More on that in a moment.)

I tried to listen to MSNBC's coverage of the Great Bolton Turnaround, but Ari Melber's show was so infuriating that my ears started to emit steam. Ari's guests -- even David Corn! -- were all stupefyingly naive. They all spoke as if Bolton's testimony was something Pelosi should consider desirable -- as if Bolton would feel compelled to tell the whole truth and nothing but.

Are these fools out of their gourds? Can't they foresee how this thing will play out? Don't they have any pessimism in their souls? Christ on a cookie, I've met five year-olds with more cynical attitudes!

On days like this, I want to scream at every teevee pundit: "There's a giant custard pie hurtling toward your face at this very moment. Wake up and smell the whipped cream." The only observer with sufficiently captious instincts is, of course, Marcy Wheeler:


Response to Bolton's announcement he'd comply with a Senate subpoena seems like a Rorschach largely divorced from consideration of what an asshole he is.

Her readers seem to have a pretty good grasp on how the world works:


Bolton is gaming us and the media is falling for it.

I find it suspicious it comes after he gets what he wants in Iran.

Why do we assume he would tell the truth?

The Protocols of Soros. To get a rough idea as to what sort of Big Lie we can expect Bolton to tell, start here. It's a story from last month describing the conspiracy theory that Evil Soros is the secret power behind the Ukraine scandal. Yes, Evil Soros somehow forced Fiona Hill and the others to testify against Trump.

Many on the left do not yet realize is that this conspiracy theory has been backstopped by a trove of fake documents, which take the form of hacked emails. Well, to be honest, I'm assuming that these texts are faked, or at least seriously yanked out of context. "Tyler Durden" at Zero Hedge accepts these "hacked emails" at face value. Do we need any further confirmation of their falsity?

The above-linked piece was actually written by one William Engdahl. Engdahl is a German-based, Texas-born climate change denier who writes about "Geopolitics and Tradition." (As noted in an earlier post, whenever you see the word Tradition written with a Capital T, you're probably dealing with a fascist-in-disguise.) Tellingly, he used to belong to the neo-fascist LaRouche organization. Back in the day, the LaRouchies spent their time concocting one fascist falsehood after another; why should I presume that any of those people have changed?

"Third positionists" like Engdahl are a slippery lot: By critiquing wealthy bankers, the CIA and the east coast Establishment, these writers have often managed to gain readers on both the right and the left. This article should give you some necessary background. You may also want to see this blog on "Third Position" fascism and the various Red/Brown alliances that have popped up over the years. 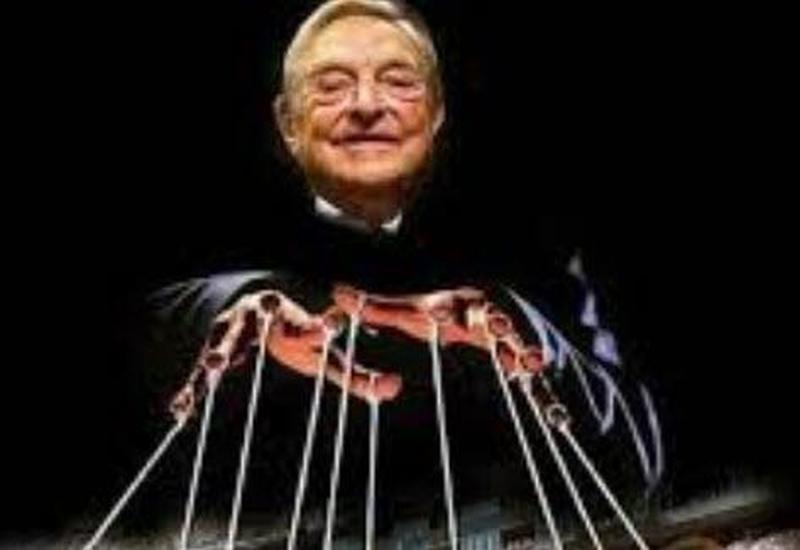 By the way, the illustration to your right does not represent my view. I include it here to summarize the viewpoint promulgated by Trump's defenders: That simplistic graphic tells you all you really need to know. Although the "Blame Soros" theory hasn't yet received a massive amount of publicity, I expect that situation to change soon.

So that's how things will play out: The Trumpers will argue that Soros engineered both Russiagate and Ukrainegate, and they will "prove" the point with bogus documents I call the Protocols of Soros.

Let's not make the error of presuming that only Trump's most gullible rubes could fall for such a ploy. Rudy "More Jewish than Soros" Giuliani has already proven that he's on board.

Don't be surprised to see John Bolton tell the Senate something which will prove very helpful to "Protocols of Soros" conspiracy theory. Again: Read this. Although I could be wrong, I think it offers a preview of Bolton's testimony.

If Trump does not embark upon a crazed, massive anti-Bolton Twitter rampage tonight, you'll know that Johnnie and Donnie have reached a secret agreement. Sure, Trump may make a few anti-Bolton noises just to keep up appearances, but those tweets probably won't be touched with the kind of madness we see when Donnie get truly ticked off.

If Pelosi is smart, she will never send those articles of impeachment to the Senate. As a face-saving excuse, she should demand that McConnell recuse himself, which he would never do. The goal should be to prevent a Senate trial and testimony by Bolton.
posted: 7:45 PM