Depression has prevented me from posting in recent days. It's hard to keep writing when disaster seems certain.

Impeachment will soon move to the Senate for trial, and I cringe to think of the show that John Roberts and Mitch McConnell will put on. I never expected Trump to be removed, but I did not understand until recently that the Republicans will use this spectacle to gin up "evidence" against the Biden family, and against the Democratic party generally. Prediction: Roberts will show his true stripes, and Dems will scream the way they screamed with Barr showed his true stripes.


President Trump said his personal attorney Rudolph W. Giuliani planned to issue a report to the Justice Department and Congress detailing what he’d learned from his investigations in Ukraine.

Trump claimed not to know what Giuliani was doing in Ukraine this week or what he found out while there, but he asserted that Giuliani says “he has a lot of good information.”

“He’s going to make a report, I think to the attorney general and to Congress,” Trump told reporters Saturday outside the White House. “He says he has a lot of good information. I have not spoken to him about that information yet.”

“I hear he has found plenty,” Trump added.


Of course, Trump said something similar about the search for Obama's "real" birth certificate. In the words of this amusing tweet: Giuliani is currently in defiance of a Congressional subpoena. How does one present a “report” under these conditions?

We've known for a while that Rudy has been gathering "evidence" from ultra-shady characters in Ukraine. Mainstream journalists will continue to expose his sources as liars and scoundrels -- but will mainstream voices be heard? Or will Trump's propagandists drown out the truth?

I'm betting that the propagandists will win this one -- and I'm still predicting a Trump victory next November. God only knows what this country will look like when he's done with it.

Why did "60 Minutes" protect Trump? We're no longer surprised when Republicans toady to Trump. But I cannot understand why non-Republicans refuse to mention the man's name, even in situations when they damned well ought to.

I refer to this investigation of the Jeffrey Epstein scandal, conducted by the Australian version of 60 Minutes. It's definitely worth watching, not least because the episode features a lengthy interview with Virginia Roberts/Giuffre. She makes a good impression and seems quite credible. Obviously, I feel horrified by what she underwent.

And yet: I've grown wary of that woman. What bugs me is the part she keeps leaving out of her story -- the part named Trump.

In her original Complaint, she did not mention the key fact that Ghislaine Maxwell recruited Virginia while she (Virginia) worked at Mar-A-Lago. The Complaint also mysteriously neglected to note that the father of Virginia Roberts is a longtime Trump employee.

It's not easy to believe that Maxwell, a Trump friend, could cruise the club for underaged employees without Trump's knowledge.

Why did Virginia originally refuse to mention her place of employment? 60 Minutes mentions that the "Epstein girls" were threatened with physical violence. Does that allegation have any bearing on Virginia's mysterious silence on the topic of Trump?

For reasons I find unfathomable, 60 Minutes absolutely refuses to mention El Presidente's connection to the Epstein scandal. Around the four-and-a-half minute mark, the narrator notes that Virginia "landed a job as a locker room attendant at an exclusive resort in Florida." But the show never names the resort.

Why? Why on earth? 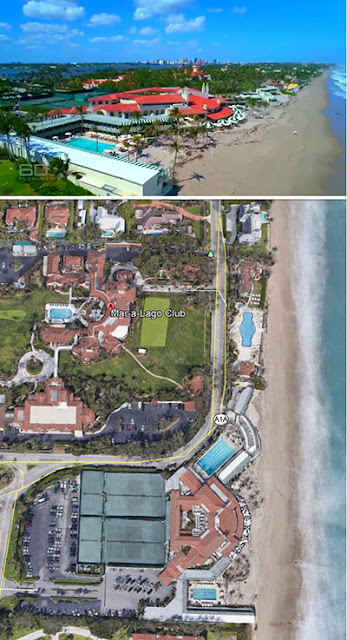 Just to be cute, the show offers an aerial view of the unnamed "exclusive resort." Yep -- that's Mar-A-Lago, all right. Trump's club may be shown but not named. Wink wink.

60 Minutes usually presents serious journalism. But it is also a capitalist enterprise, interested in attracting viewers. Looking at the situation from both a journalistic standpoint and a capitalist standpoint, can you think of one good reason why this report would not mention the names "Trump" or "Mar-A-Lago"? Yet at no point are we told that the current American president was A) Epstein's friend, B) Maxwell's friend, C) Virginia's employer, and D) Dad's employer. If you can convince yourself that facts A, B, C, and D are unimportant, you possess a formidable talent for rationalization.

The presentation leaves out much else. Why does the show never mention the fact that Trump chose Alexander Acosta to be his Labor Secretary? Acosta was the person who made Epstein's "sweetheart deal" happen -- yet Acosta's name, like Trump's, is a Great Unmentionable.

The show does inform us that the decision to shut down the first Epstein prosecution came from "the highest levels" in DC. But the year is left hazy; we are not told that the shutdown occurred during a Republican administration.

Predictably, the spooky side of this story is completely ignored. Why would 60 Minutes keep silent about the credible report that Acosta was told that Epstein "belonged to intelligence"? Why no mention of the fact that Ghislaine Maxwell's father also worked for an intelligence service? (These days, no-one disputes Robert Maxwell's history with Mossad.)

Here's another name to add to out list of Great Unmentionables: Alan Dershowitz -- famed lawyer, infamous asshole, impeachment opponent and frequent Fox News guest. We all know what Virginia Roberts said about Dershowitz in her original Complaint. If 60 Minutes doubts the credibility of that allegation, then the audience should have been so informed. If 60 Minutes believes her, why not name Dershowitz?

The documentary never addresses the mystery of how Epstein earned his fortune. A growing number of people believe that he managed, or laundered, money for Russian oligarchs. Journalist Vicky Ward has written that a number of underaged young women in Epstein's circle apparently came from Eastern Europe. Sex trafficking from that part of the world is controlled by crime lord Semion Mogilevich, whose associates continually weave in and out the Trump saga. 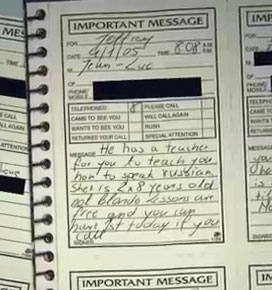 Actually, the report offers a further clue. Around the 24 minute mark, this 60 Minutes episode displays a intriguing message to Epstein concerning one of his key associates, Jean-Luc Brunel: "He has a teacher for you to teach you how to speak russian. She is 2x8 years old."

"2x8"? That's a pretty odd way to indicate that someone is 16. (Perhaps she was 28, but the message definitely inserts an X between the digits.) This detail is important for a couple of reasons: It tells us that Epstein wanted to learn Russian, and that a girl from that country made the trip for that purpose.

Why didn't 60 Minutes mention the links between Jean Luc Brunel and Trump cabinet member Steve Mnuchin? Why no mention of the fact that Brunel operated out of Trump Tower?

The documentary goes on and on and on about Prince Andrew's link to Epstein. (The royal family might stand in the way of a fascist takeover of the UK, so smearing the royals has become a right-wing project.) But why no mention of Steve Bannon's link to Jeffrey Epstein? Bannon is the more influential and important figure: He's the guru of the international far right.

If I had the chance to interview Virginia Roberts Giuffre, the first question I'd ask is this: "Why did you leave Trump out of your Complaint?" The second question: "Does Trump still employ your father?"

(We need to know more about that guy. Virginia was repeatedly violated as a child, starting at the age of seven. Most fathers do a better job of protecting their daughters.)

Finally, I'd like to ask Virginia if she knows the history of her other lawyer, J. Stanley Pottinger. If she's sincere about wanting to expose the rich and the powerful, why would she be represented by a man whose name keeps coming up in the annals of GOP skullduggery?

Why would Aaron Sorkin cover up for Trump? While writing the above, my mind kept wandering toward the film version of Molly's Game. The movie tells the story of Molly Bloom, the woman who ran a high-stakes poker enterprise in Hollywood. When things fell apart in Los Angeles, she moved to New York -- specifically, to Trump Tower, where she became involved with shady Russians familiar from the many articles we've all read about Trump-related scandals.

Trump has denied any connection to Molly's games. Oddly, Donald and Ivanka Trump were the listed owners of a mysterious company called Poker Venture, headquartered in Trump Tower.

Sorkin also obscures Molly's relationship with the Russians, who obviously were backing the venture. Molly Bloom dealt with a lot of money. You don't extend that kind of credit without muscle.

There's a scene toward the end of the film in which Molly is beaten and robbed by a thug hired to intimidate her. The film alleges -- unpersuasively -- that the hit man worked for the Italian mob, but I found an early news account which claims that it the Russians were the ones who went after Molly Bloom. Italian hit men do not rob their targets -- it's an honor thing -- but Russians do.

So why did Aaron Sorkin cover up for Donald Trump?

(For more than a year, I've been meaning to write a long analysis of Molly's Game, which is an infuriatingly deceptive film. Maybe one of these days.)
posted: 4:49 AM