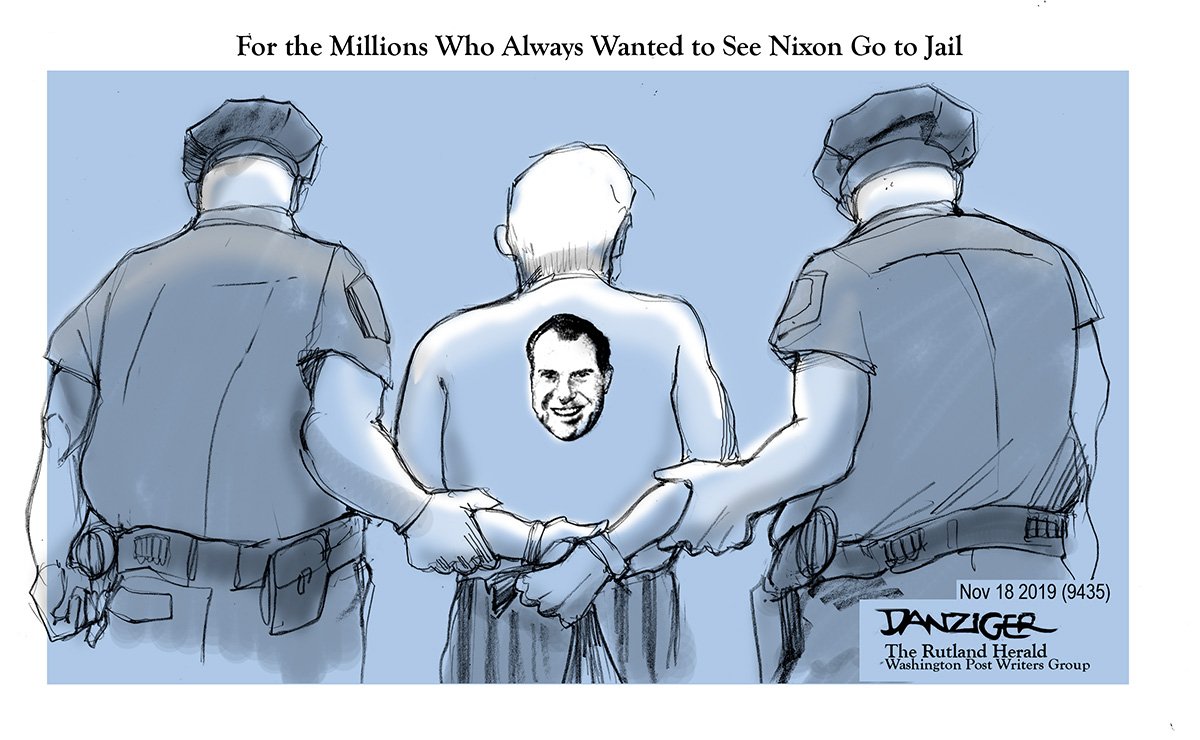 The most important problem arising from Trump's mysterious hospital visit may not be his health but his penchant for reflexive deception. At this point, nobody believes that he went in for a routine physical.

His dim-bulb press secretary is reduced to saying "“Further speculation beyond the extensive & honest info I put out is wholly irresponsible & dangerous for the country." I am Truth, sayeth Stephanie; thou shalt not question.

(Do kids still tell that joke? It was inescapable when I was growing up. A child holds up a blank sheet of paper and announces that he has just drawn a cow eating grass. Where's the grass? The cow ate it. Where's the cow? Gone to find more grass. In the under-6 community, that one killed.)

I like Pete Buttigieg, but I don't think he's the guy. He may prevail in Iowa and he may do well in New Hampshire, but I don't think that those states mean what they used to mean. The African American votes are elsewhere, and they are more significant than ever before in this cycle.

And then there's California. The decider.

Buttigieg is this year's equivalent of Obama: A moderate who can appeal to hard-core lefties because too many progs care more about identity politics than they care about policy. The big difference -- and it's a serious problem -- is that Obama went from regional politics to the Senate before running for the highest office. Granted, Obama was in the Senate for maybe five or ten minutes, but even that short span gave him gravitas.

Experts. The Heritage Foundation staged a "debate" between two alleged experts as to whether this impeachment is legitimate. (As if that question were open to debate.) Their two "experts": The National Review's Andrew C. McCarthy and Alan Dershowitz.

Bibi's going to be indicted! Oh, this is glorious news. But he still holds power, and there are indications that he intends to hold on to power by staging another war against nearly-defenseless Gaza.

The Louisiana win. One overlooked aspect of this victory is that Louisiana will soon redistrict. The big question: If Dems manage to re-attain power on the state level -- not just in LA, but across the country -- do they counter-gerrymander (favoring their own interests) or do they try to end gerrymandering altogether? I certainly hope for the latter option.

That said, it is frustrating to live in a country where one party tries to do the right thing while the other continually tries to bend the rules to the snapping point.

The first quid pro quo. These two tweets by Natasha Bertrand -- one of the best reporters alive -- tell us that the real Ukraine scandal began earlier and goes deeper than most Americans understand.


As I reported in May 2018: McMaster and Mattis pushed for Trump to approve Javelins sale & convinced him, at least in part, by noting that Obama had balked at the sale. Poroshenko then won favor with Trump by facilitating an $80 million coal deal w/the US.

She links to this piece in the Atlantic. Here's the follow-up tweet:


In the months following the weapons sale, Poroshenko also ordered Ukraine’s top anti-corruption prosecutor tasked with probing corruption under Yanukovych to stop cooperating with Mueller. Democrats want to know whether that, too, was a quid pro quo:

The link goes to her new piece in Politico. An excerpt:


The U.S. completed its shipment of Javelin anti-tank missiles to Ukraine in May 2018, finalizing a sale that was pushed by lawmakers in both parties and reluctantly approved by Trump in November 2017. In April 2018, then-Ukrainian President Petro Poroshenko ordered Ukraine’s top anti-corruption prosecutor Yuriy Lutsenko—who’d been tasked with investigating corruption that occurred under former Ukrainian President Viktor Yanukovych—to stop cooperating with special counsel Robert Mueller.

Mueller, at that point, was investigating former Trump campaign chairman Paul Manafort’s work for Yanukovych in Ukraine and his ties to Russia.

So when Trump pressured Zelensky for an announcement of a Biden investigation, he (Trump) was simply repeating a strategy that had worked earlier.

Nevertheless, the Javelin supply was interrupted. One report holds that it was stopped by the OMB (i.e., Mulvaney, also the chief of staff) for fear of annoying Russia. From the Ukrainian perspective, this was the nightmare scenario: Even if they gave in to Trump's extortion, they still might not get the weaponry they need.

By the way: You may be wondering why Obama did not offer Javelins to the Ukrainians.


The Obama administration’s hesitance to approve the sale of the Javelins, officials said at the time, was primarily due to their concern that Russia, which was pouring troops and weapons into eastern Ukraine, could use the missiles as a pretext to escalate the conflict.

The more I talk talk to sources, the more i’m hearing America’s betrayal of the Kurds, and the humiliation, “misogynistic” “squashing” of US ambassador in Ukraine for political motivations makes people think, we, Americans, have become the “bad guys.” Hearing it was gut punch.
— Richard Engel (@RichardEngel) November 17, 2019

Of course, a lot of people thought we were bad guys before.

PREDICTION: Donald Trump will resign from office before he can be impeached, citing health reasons.
— Jon Cooper 🇺🇸 (@joncoopertweets) November 17, 2019

Oh, will he? How will he protect himself?

I've been warning about this for a while. Here is what's fascinating: American fascists are going off to Ukraine in order to fight Russians, even though they generally support Putin in all other respects. I don't think they care about Ukraine per se; they're simply itching to fight anyone. Fighting for the sake of fighting. Proof of testosterone, that sort of thing.

They are joining the Azov battalion, the fascist paramilitary wing funded by oligarch Ihor Kolomoisky.  When Giuliani visited Ukraine, he was hosted by leaders of the Renaissance Party, the political organization also funded by Kolomoisky. This turn of events indicates that Giuliani and Kolomoisky, formerly at odds, have patched up their differences in recent months.

Kolomoisky, I remind you, is the moneyman behind Zelensky.

(I'm not behind the TPM paywall, but I was able to read this important story because a friend to this blog sent me the text. Thanks!)

Few on the left or the right want to talk about the brutal, fascistic nature of the Azov battalion. It does not help anyone's narrative. For the same reason, nobody wants to talk about the unnerving fact that Zelensky, the alleged anti-corruption crusader, owes his career to Kolomoisky.
posted: 1:35 PM