Yesterday, I was called away from my computer to do some home repairs. The results were, basically, a Laurel and Hardy movie.

Let's catch up on the news.

Trump screws up his big moment. I was stunned by how ineptly Trump handled his announcement of the Baghdadi operation. If he had respected convention -- if he had stuck to the teleprompter and offered a relatively dignified speech calling for unity -- he could have sandpapered three or four points away from the impeachment support number. It wouldn't take much sandpapering to make Nancy Pelosi lose her nerve.

This episode offered yet another reminder of Donald Trump's sheer weirdness. The dude's scary. Even if I agreed with his policies, I'd still find him scary. Why does he always insist on being so vulgar and low and graceless and vituperative and nasty and, well, Trumpy? Many have compared Trump to a gangster, but even John Gotti would have handled that situation in a more appropriate fashion.

Trump had one job to do that day -- an easy job -- and he blew it. His performance was the equivalent of an NBA player missing a free throw while standing on a table positioned two feet away from the basket.

Vindman. The ultra-tacky smear campaign waged against Colonel Alexander Vindman was predictable, yet it still made me want to vomit. The Trumpers should have stayed quiet and waited for the news cycle to shift. But no: They had to tell horrendous lies about a decorated combat vet and purple heart recipient.

Many people have compared the attacks on Vindman to the earlier attacks on those Gold Star parents who appeared at the 2016 Democratic convention. In a way, the current smear is worse. Fox News gave this smear-job its imprimatur. If memory serves, the 2016 smear was relegated to Breitbart, InfoWars, and Roger Stone's Twitter feed; Fox was not the prime mover. 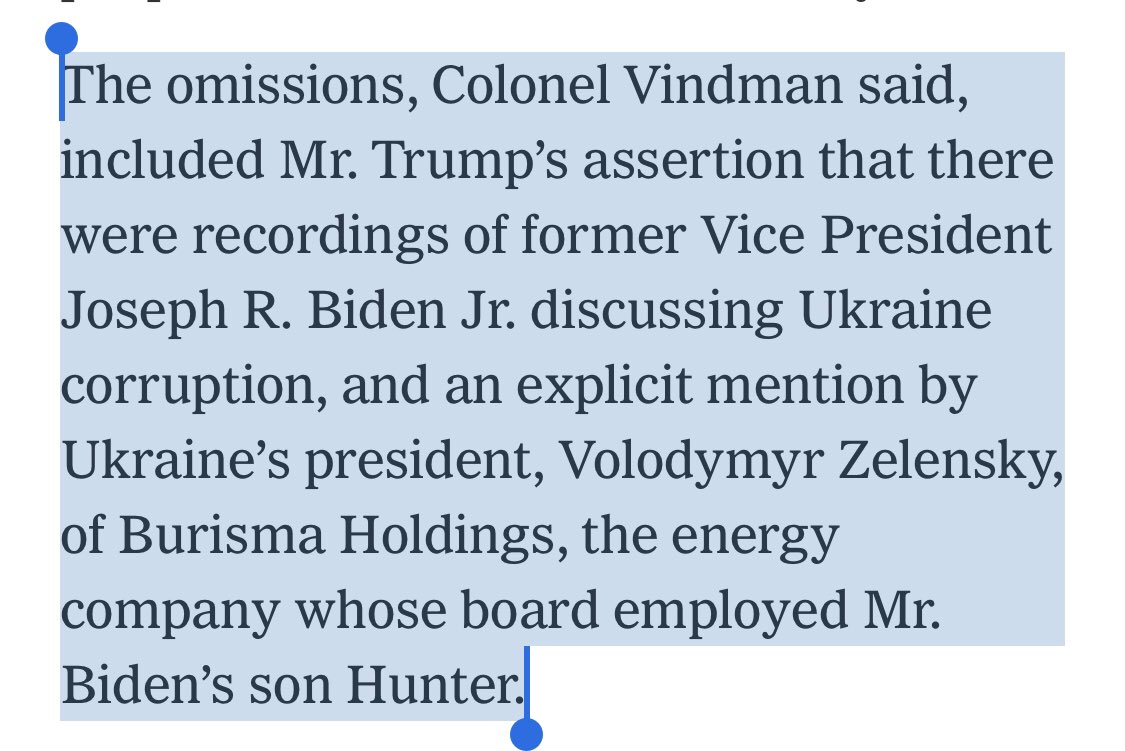 Vindman testified that the transcript of Trump's call to Zelensky was incomplete. Personally, I've long suspected as much. A big "tell" was Trump's repeated insistence that the call was "perfect" and "beautiful." Every time he said those words, he seemed to be admitting that he cut the worst bits out.


But Colonel Vindman’s account offered a hint to solving a mystery surrounding the conversation: what Mr. Trump’s aides left out of the transcript in places where ellipses indicated dropped words.

I would not be surprised to learn that Trump scissored out a reference to Firtash. So much of this scandal comes back to Firtash, doesn't it?

I'll say it again: Hiding the full, unredacted transcript is illegal. Under 28 CFR § 17.22, it is against the law to classify information "in order to conceal inefficiency, violations of law, or administrative error; to prevent embarrassment to a person, organization, or agency."

It's always dangerous to disagree with Marcy Wheeler, but she offered a badly-written tweet with which I would take issue.


Thus far the claims that Vindman said WH "doctored" the transcript are no more validated that frothy right that Lisa Page altered Flynn 302...

A 302 is an official record of an FBI agent's interview with...well, with anyone. The agent is supposed to take notes during the interview and write up a 302 report shortly afterward, while the agent's memory is fresh. This system has worked for decades, but some Bureau critics have questioned it on the grounds that this process gives an agent room to "massage" the transcript, consciously or unconsciously. It may be better for agents to record their interviews.

1. Vindman's testimony, in and of itself, offers validation. Vindman is, by all accounts, a man of fine character and high expertise. Has anyone of his caliber suggested that the Flynn 302 was changed?

2. The Zelensky transcript contains mysterious ellipses, and it doesn't seem long enough to match the reported time of the call. Bad as it is, there are indicators that the most damning bits were snipped.

Right now, my argument rests on those two pieces of evidence. You may want more. But you can't claim there is no evidence that the Zelensky transcript was doctored.

Pap hopes to run for that seat. So how did he know...? Perhaps I should reprint Seth Abramson's observations...


PS/ I don't know of one Democrat who wasn't immediately suspicious when one of Trump's top critics in Congress and on the House Oversight Committee suddenly found herself in the crosshairs of oppo research just as the most damaging impeachment evidence was emerging against Trump.
PS2/ I've no theory about this and am presenting no theory about this. But I will note that Papadopoulos has a history with both the Israelis and the Saudis, and it's the Israelis and Saudis who are now facing federal allegations regarding the hacking of powerful persons' phones.
PS3/ What I will say, and wrote of in PROOF OF CONSPIRACY in addition to discussing Papadopoulos' contacts and ties to Israelis and Saudis, is the Saudis look to have used Israeli technology to hack the phone of Trump critic Jeff Bezos to access nude photos.

Echoes of that here.
PS4/ While in this case the allegation made by Hill herself is that the photos came from her ex-husband, remember that in the Jeff Bezos case there *also* was a person associated with the victims who initially was said to be the source of the photos. Then it got more complicated.
PS5/ All I'm saying is everything about this stinks to high heaven just as Epstein's death stinks to high heaven, just like everything Trump touches that involves Russia or Ukraine or Israel or Saudi Arabia or China stinks to high heaven. There's a pattern here we can acknowlege.
PS6/ It may well be that there'll come a time when Rep. Hill would need to resign her seat on the basis of having violated Congressional regulations about relationships with subordinates (regulations I very much agree with), but I wonder if for *now* she should stay in Congress.
PS7/ Tagging @RepKatieHill and @KatieHill4CA here.
mentions PS8/ Why was a guy who may have had foreknowledge of the attack on Rep. Hill talking publicly about Republicans "getting even" three days ago?


Don’t get mad, get even, then ahead

As far back as October 23, Pap foreshadowed current events.


California’s 25th congressional district is looking very tempting and wide open for the taking. Katie Hill is an embarrassment to the great people in that district. CA has been my home with my wife for over a year now. We deserve better.