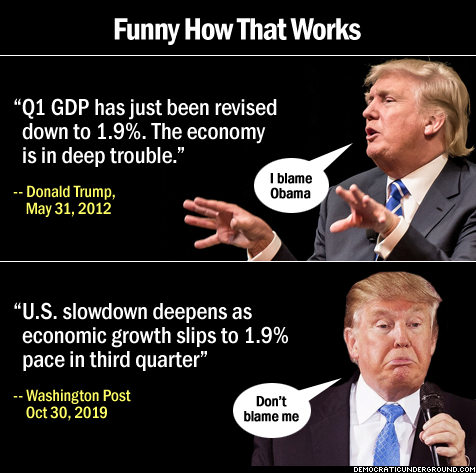 From a Dem perspective, bad economic news is good economic news -- until November, 2020. A well-timed turndown will help us banish the Papaya Palpatine. You can't outlaw the business cycle: Recessions are inevitable, and it's better for bad times to hit while Team Red is in office.

The big question: Since Trump created faux-prosperity by spending like a maniac and putting it all on the credit card, will a post-Trump president (of either party) have the ability to use Keynesian solutions to pull us out of the next recession?

Bolton will testify! Olivia Beavers of The Hill just tweeted this news:


NEW depositions coming up with some big names, a source familiar w/ impeachment inquiry tells me:


Haven't had popcorn in ages. Heart condition, you know. But I think I'm gonna need some...

Devin Nunes' strange pal. The remarkable Natasha Bertrand has another piece on Kash Patel, the very odd Devin Nunes associate who became an NSC staffer. Before all of that, he was a DOJ counterterrorism prosecutor who apparently was not very good at his job: A judge once hit him with an "order of ineptitude." (I'm not quite sure what that is, but it doesn't sound promising.) Right now, he seems to be part of Trump's effort to smear the FBI and to absolve Russia of responsibility for their dirty tricks in 2016.

According to Bertrand's latest, which draws from Vindman's testimony, Patel has been parading himself as a Ukraine expert.


But he [Vindman] was instructed “at the last second” not to attend the debriefing, Vindman told lawmakers, because Trump’s advisers worried it might confuse the president: Trump believed at the time that Kashyap Patel, a longtime Nunes staffer who joined the White House in February and had no discernible Ukraine experience or expertise, was actually the NSC’s top Ukraine expert instead of Vindman.

And here, I always thought that Patel was an Indian name, not a Slavic name. This bio says that Kash grew up in New York. But was he born there? If not, perhaps we should judge him by the same standards the GOP applied to Vindman. Those sneaky agents of the Great Indian Conspiracy are everywhere, you know. If we don't stop 'em now, pretty soon we'll all be eating curry and painting dots on our foreheads.

Basically, the conspiracy maniacs are shoving out the pros in this administration. A couple of days ago, Rachel Maddow talked about the mad Illuminati-spotter who got a cozy sinecure from Trump. If good old Leo Taxil were alive today, he probably would have talked his way into Betsy DeVos' gig.

Could Patel face charges for his impersonation? Seriously, that must be a crime. Pelosi should not restrict impeachment to Trump: Let's go after all of these assholes, starting with Barr.

The whistleblower. From a speech by Chuck Schumer:


"Anyone seeking the release of the whistleblower's identity is frustrating the truth and is potentially in violation of federal law."

Actually, the far right side of the interwebs has been tossing a certain name back and forth for a while now. I've been on the fence as to whether I should mention that name in this blog. Naturally, the slingers of mud are desperately searching through this guy's life history, looking for any and all smear-worthy materials: "What's more, he pulled a little girl's ponytail in second grade! Can you believe it? The FIEND!"

Meanwhile, the righties couldn't care less about Jared Kushner's ties to organized crime, or about the $90 million Jared grabbed from foreign entities using offshore accounts. That isn't corruption, in their eyes. The whistlebower? That's corruption. Hunter Biden? That's corruption. But not Jared, and not Trump's kids.

Trumpian lawbreaker named? I don't know who this guy is, but he just offered an interesting tweet...


Michael Ellis is the White House Nat'l Security Counsel lawyer who likely authorized the cover-up of POUTS's incriminating phone transcripts by directing them to be illegally classified and stored on the super-secure server.

That's against the law. Actually, it's against a couple of laws, but the one I cite is 28 CFR § 17.22. If Ellis is the guy, maybe he can tell us if Barr played a role in this decision, as I suspect. If so...dis-Barred!

Ellis is going to testify on the 4th. Expect belligerence.

Epstein. I know I should write at length about Michael Baden's findings of homicide. Although my paranoid reflexes compel me to suspect that Epstein was murdered, I am also someone who (off and on) has followed the JFK assassination controversy since the 1960s. Based on that experience, I have to warn you: Don't trust Baden. None of the JFK researchers I like has ever liked Baden.

The real conspiracy at play here is the right's continual attempt to tie Epstein to Clinton. As if the Clintons had the ability to arrange a hit in a very secure section of a New York prison!
posted: 4:35 PM