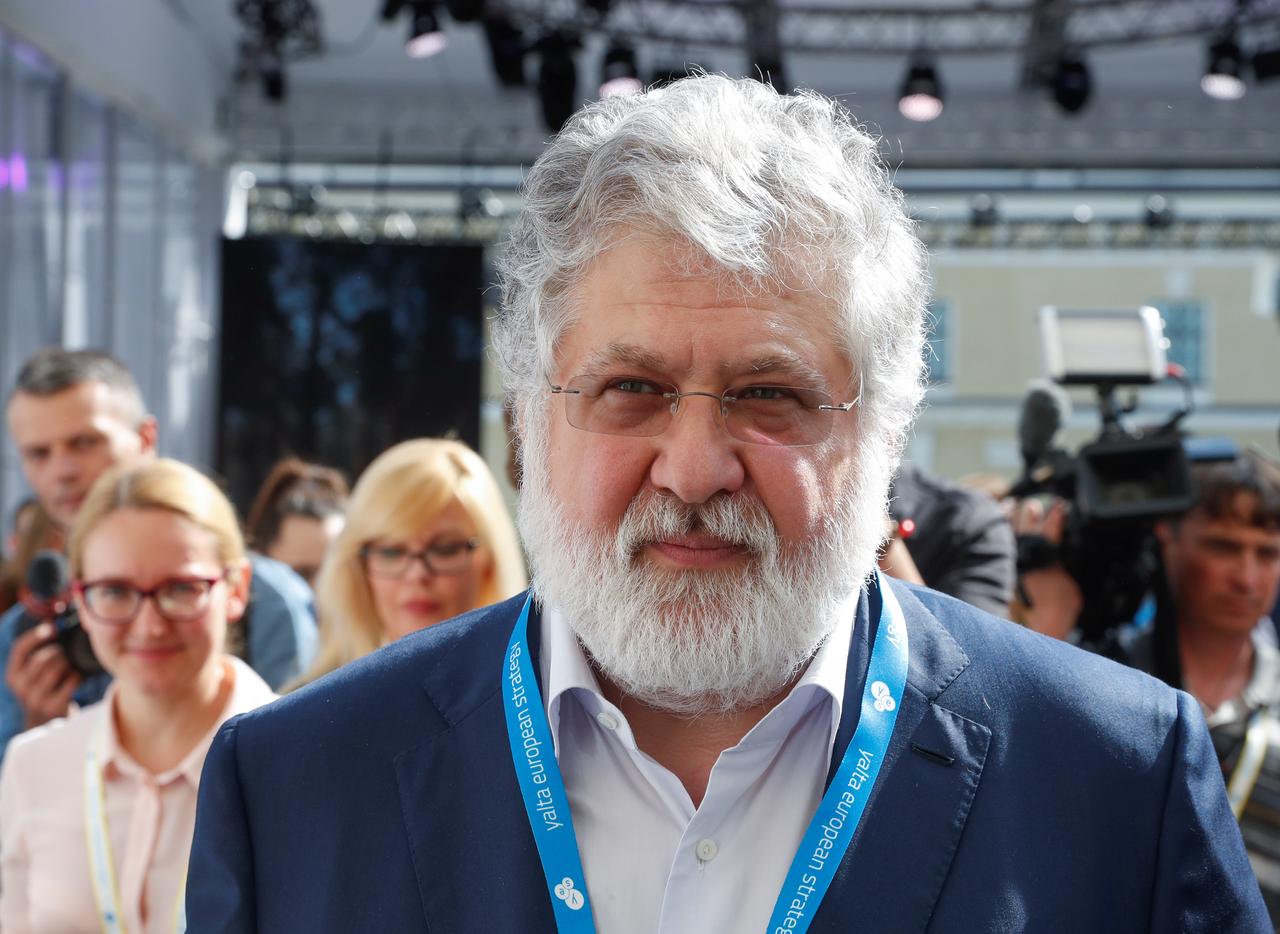 (This post features original research on the "whistleblower" scandal. I ask readers to spread the word.)

You've probably never heard of Ihor Kolomoisky. You could read a hundred articles about the burgeoning "whistleblower" scandal without once seeing his name.

But he's behind it.

Or rather: He's the oligarch behind Volodymyr Zelensky, the comic actor who became the current leader of Ukraine. Zelensky became famous in his country starring in a show called Servant of the People, in which he played an average guy who, almost accidentally, becomes president of Ukraine. That show was broadcast on Kolomoisky's TV network 1+1. By most accounts, it was Kolomoisky who decided that art should imitate life. He transformed the sitcom president into a real president.

Though Zelensky has denied in interviews that he is Kolomoisky's puppet, many have discerned a certain "Edgar Bergen/Charlie McCarthy" quality to their relationship. While running for office, Zelensky made several trips to Tel Aviv. That was a tell: Kolomoisky lived there during his period of exile.

He's not in exile anymore.

Why did Kolomoisky leave Ukraine? To save his skin. The previous president, Petro Poroshenko, had nationalized PrivatBank, which was owned in large part by Kolomoisky. This was no small matter: Nearly half of all Ukrainians with bank accounts dealt with PrivatBank.

There was a very good chance that Kolomoisky himself might have seen the inside of a courtroom, had he stayed in his home country. From the Daily Beast:


Kolomoisky has a host of enemies. He’s been accused of commissioning contract killings. And in 2016, Ukraine’s central bank nationalized Kolomoisky’s PrivatBank because it didn’t have enough cash. Billions of dollars disappeared from its coffers because it lent so much to Kolomoisky associates, according to the FT. The move was widely viewed in the West as a victory for transparency and good governance, in a country whose politics are impoverished on both counts. It was a flashpoint in Kolomoisky’s relationship with Poroshenko, and many speculate the oligarch backs Zelensky in part because hopes to depose the president who oversaw the takeover of his bank.


Kolomoisky first and foremost, had robbed it to the tune of $5.5 billion by getting it to issue loans to shell companies that were never expected to be recovered. The accusations were confirmed by an investigation by Kroll, the American risk-mitigation company, conducted for the National Bank.

Hence his "vacation" in Israel, which does not extradite citizens. Kolomoisky has triple citizenship: Ukrainian, Israeli and Cypriot. (Privatbank was the first Ukrainian bank to open a branch in Cyprus. There's also a branch in Moscow.) Although Ukraine's constitution prohibits dual citizenship, Kolomoisky argues that the constitution says nothing about a triple.

From afar, he constantly tried to get his bank back. Poroshenko stood in his way. Thus, it was necessary to get rid of Poroshenko and replace him with someone pliant. With Zelensky in office, a Ukrainian court decided in Kolomoisky's favor, allowing him to return to Ukraine.

(Hilariously, Zelensky's character on that TV show came to prominence by inveighing against corruption.)

One of the reasons people have likened Kolomoisky to a James Bond supervillain is his taste in pets: He keeps a large shark in a tank in his office. When he's in a mood to intimidate his associates, he feeds the shark while they watch.

Another reason: There are longstanding rumors that he has had people killed. Those "rumors" are very real to Valeria Gontareva, the former head of Ukraine's National Bank -- the central bank of her country. She exposed the corruption at PrivatBank.


In March 2018, Valeria Gontareva revealed the alleged theft of US$5.5 billion from PrivatBank, once the country’s largest commercial lender. The suspected masterminds are the bank’s two oligarch owners: Igor Kolomoisky and Gennadiy Bogoliubov, who stand accused of absconding with an amount roughly equal to 5 percent of the country’s gross domestic product.

Gontareva has been blaming Kolomoisky and his allies for the hostile acts against her and her family, saying he was threatening her. The controversial oligarch has denied her allegations.

One of those threats involved a coffin placed at her door. She quit her job as head of the National Bank.

The prospect of Kolomoisky's return put her in fear of her life, so she moved to London. On August 26, a car struck her while she crossed the road. In September, her home in Kyiv burnt to the ground in an arson fire.

President Volodymyr Zelensky, in turn, said he expected the police to investigate the incident as soon as possible.

When asked about these attacks, Kolomoisky offered these cryptic words: "Now, it is most likely she will not be extradited [to Ukraine]. Therefore you think [about theories]..." Kolomoisky's favorite theory is that she burnt down the house herself.

The scandal. At the point you may be wondering: How does all of this relate to the "whistleblower" scandal?

It's simple. You have to think of that scandal in terms of pressure points. Trump wants two things: He wants dirt on Joe Biden, and he wants to pardon Paul Manafort. (One of the charges against Manafort concerns payoffs from a previous Ukrainian government. If the documentation is declared spurious, Trump may have political room to issue a pardon.)

Right now, most people believe that the key pressure point involves the $250 million in military aid earmarked for Ukraine, which is fighting a war against Russians in the north. There is also the strange matter of an extra $140 million, which serves no apparent purpose beyond appeasing the graft which has become endemic to Ukrainian politics. As most people know by now, Treasury Secretary Steven Mnuchin had no answer when asked about this money. It was a classic Ralph Kramden homina homina moment.

You see, he has been accused of money laundering. And for quite a while now, he has been under investigation by the FBI.


“Mr. Kolomoisky categorically denies that he has laundered any funds into the United States, period,” said Mike Sullivan, an attorney with the Ashcroft Law Firm who represents Kolomoisky. “He’s a businessperson. His bank was seized by the government, claiming the bank was on the verge of collapse. That information turned out to be false.”

The U.S. Attorney’s Office in the Northern District of Ohio is involved in the probe, as Kolomoisky has investments there, according to the Kyiv Post.

In this interview, Kolomoisky seems serenely confident that the FBI probe cannot possibly hurt him.


“It’s quite possible that some sort of probe is actually carried out,” he said. “And it will be completed and will result in nothing, as usual. Because I have not done anything illegal in the territory of the United States, or the European Union, or Ukraine. And all the rest are political manipulations.”

There are quite a few people who think that Kolomoisky himself is the one manipulating politics.

More importantly, the existence of an FBI probe means that he is open to manipulation.

The FBI is an investigative agency. That's what the "I" stands for. They don't mount prosecutions. In a case like this, the decision to prosecute or not to prosecute would be made by William Barr. By this point, I think we've all gained a pretty good idea as to who Barr is and how he operates.

Incidentally, some of the allegations against Kolomoisky involve real estate in Cleveland, Ohio. That's not his only strong link to the United States: His son Gregory is an impressive college basketball player.

Never forget that Kolomoisky is the real power in Ukraine. He made Zelensky and he can break him. That's why I'm not expecting much from the release of the transcript of Trump's call to Zelensky: If any quid pro quo was discussed, it probably was not discussed on that occasion.

For God's sake, DON'T TRUST ZELENSKY! He came into office posing as a "clean politics" crusader. Just yesterday, Trump announced his confidence that Zelensky would end corruption in his country. Whenever Trump pronounces someone "clean" -- watch out.

In essence, Trump controls Kolomoisky, and Kolomoisky controls Zelensky. From the Kyiv Post:


However, there are fears that under his presidency Ukraine could face the prospect of a resurgent oligarchy, reprisals and politically motivated violence.

Despite having promised that Ukraine would become a country of law, Zelensky faces growing impatience and criticism for not confronting elites and oligarchs accused of crime and wrongdoing. Ex-President Leonid Kuchma, his son-in-law and billionaire oligarch Victor Pinchuk, the oligarchs Rinat Akhmetov and Dmytro Firtash, Interior Minister Arsen Avakov, Kharkiv Mayor Gennady Kernes, and Odesa Mayor Gennady Trukhanov have all entered the presidential orbit without consequence.

“Zelensky is hanging out with the wrong people — sending the wrong messages,” writes Timothy Ash, a London-based economist and Ukraine analyst. “They are taking Ukraine back 20 years… Reformers living in fear. The decisions made now will shape the rest of the Zelensky presidency.”


It's as if Martin Sheen became president, announced an end to corruption, and immediately started to hang out with Roger Stone, Erik Prince and the Mercers.

Now look at Trump's evolving story on his conversation with Zelensky:

After Trump’s statement, his defenders set a land-speed record for switching from “How dare you!?” to “You’re damn right he did it, and I’m glad” prompting me to ask, what kind of idiots do they take us for?

I have no doubt that their talk was indeed "largely corruption." Zelensky may be the most corrupt politician in Ukraine's history, and that's saying a lot.

When he stands with Trump during his upcoming visit, he will undoubtedly say whatever Trump wants him to say. And any Dem who believes one word will be a fool. No matter what kind of evidence he offers absolving Manafort or condemning Biden -- do NOT believe it.

Note that the Trump/Zelensky meeting was arranged after the scandal broke. If Trump did not have Zelensky under total control, the meeting would never have been scheduled.

Kolomoisky: Whose side is he on? I must mention a particularly strange tributary of this story. Dmitry Firtash is a name we've seen before as we've plodded through the scandals besetting this administration. For one thing, he has shadowy but definite links to Cambridge Analytica.

Firtash is a pro-Russian Ukrainian oligarch. Kolomoisky is (was?) very anti-Russian -- in fact, he funded the notorious, fascistic Azov battalion, which battles the Russians in the north. (It is said that the Russian takeover of Crimea hurt Kolomoisky's interests severely.) You'd think that these two guys would hate each other.

Yet Firtash and Kolomoisky appear to be on friendly terms nowadays...


The billionaire said that the U.S. prosecution of Dmytro Firtash, another notorious Ukrainian business tycoon, was also politically driven. Firtash has been living in Vienna since 2014, fighting extradition to the U.S., where he is wanted on the charges of large-scale bribery.

“Firtash is in Vienna facing politically motivated accusations — and this results in nothing,” Kolomoisky said. “He’s feeling fine there. But he wants to get back to Ukraine.”

I don't claim, at the point, to know what all of this means, but I felt obligated to mention the Firtash connection.

There are other indications that Kolomoisky -- who, I must repeat, is the real power in Ukraine -- may be patching up his differences with Putin. Many of you know about twhite nationalist army officer Jarrett William Smith, who threatened attacks on a cable news network and on Beto O'Rourke.


He is also said to have discussed Beto O'Rourke as a target and traveling to Ukraine to fight with far-right group Azov Battalion.

From my occasional dips into the far-right side of the interwebs, I've learned that America's fascists were distressed when the Azov battalion -- fascist to the core -- took up arms against Putin. I've also seen indications that they may be ready to switch sides.

Did I mention that PrivatBank is in Cyprus and Moscow?
posted: 7:02 PM