There was a time when I might have favored the recent DNC rules change, but the modifications now seem disastrous. They are designed to grease Bernie Sanders' way to the nomination, even though Sanders is clearly the guy that Trump wants to run against.

Never forget that there is video of Sanders engaged in an anti-American protest.


I have seen the opposition book assembled by Republicans for Sanders, and it was brutal. The Republicans would have torn him apart. And while Sanders supporters might delude themselves into believing that they could have defended him against all of this, there is a name for politicians who play defense all the time: losers.

Worst of all, the Republicans also had video of Sanders at a 1985 rally thrown by the leftist Sandinista government in Nicaragua where half a million people chanted, “Here, there, everywhere/the Yankee will die,’’ while President Daniel Ortega condemned “state terrorism” by America. Sanders said, on camera, supporting the Sandinistas was “patriotic.”

The Republicans had at least four other damning Sanders videos (I don’t know what they showed), and the opposition research folder was almost 2-feet thick. (The section calling him a communist with connections to Castro alone would have cost him Florida.)

Sanders cannot win the 2020 general election. He would lose all 50 states, including Vermont, for reasons I give here.

Allow me to repeat the points made in another previous post:


The fact is that Tad Devine, Bernie's chosen campaign manager, is basically interchangeable with Paul Manafort. No actual progressive would stay within twenty feet of Devine.

The fact is that Manafort's partner, Roger Stone, specializes in propping up "spoiler" Dems like Bernie.

The fact is that Bernie's campaign was a cesspool of misogyny. And I'm talking about real woman-hate, truly vicious stuff. I'm not talking about the iffy claims made by those hyper-sensitive Me-Tooers who accused Al Franken of committing rape because he put his hand on a woman's waist as a photo was snapped. (Isn't it strange how "Me Too" standards differ when we start talking about Moscow-approved politicians?)

Bernie said absolutely nothing about the misogyny pervading his campaign until forced to do so. And even when he finally, belatedly, offered a pro-forma denunciation, nothing in his campaign changed. To the end, his campaign was marked by rage, lies, smears, paranoia, fanaticism, cultishness, Messiah-worship, threats, hyper-emotionalism and hatred of all things female. Compared to the BernieBros, the Bolsheviks were the apostles of sweetness and reason. 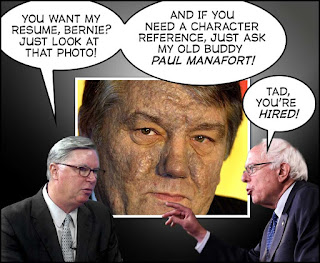 Bernie chose Tad Devine even though Devine's main claim to fame was his work on behalf of the Ukrainian thug Viktor Yanukovich. Yanukovich had poisoned his great political rival, Viktor Yuschenko. The toxin did not kill Yuschenko, but it did disfigure his once-handsome face. Bernie knew this.

The superdelegate system was put in place to prevent someone analogous to Trump -- a populist extremist with a fanatical cult following -- from attaining the Democratic party's nomination. If the GOP had superdelegates, the world would be a much safer place right now.

Here's another problem the new rules...


Beyond changing the rules for superdelegates, the overhaul is intended to make vote-counting at presidential preference caucuses more transparent and make it easier for voters other than longtime registered Democrats to participate in caucuses and primaries.

That could affect states such as Iowa, which might have to develop paper ballots for caucus sites instead of its usual method of sorting into groups and counting heads. New York, meanwhile, would be pressured to relax its party registration deadline, which in 2016 fell six months before the primary, leaving many independents who wanted to back Sanders no option to vote.

If you're not in the party, you have no right to involve yourself in the party's internal affairs. Democratic primaries are for Democrats.

If you believe in a certain religion, should members of other religions get a say in matters of doctrine and organization? If you are a farmer, should competing farmers tell you what to plant? Should Warner Brothers dictate how Marvel makes superhero movies? If non-Democrats can tell the Democrats who to nominate, then why shouldn't non-Americans be able to vote for the American president?

Six months' membership is the bare minimum. Frankly, even that time limit does not suffice to prevent manipulation by the Republicans. We know that crossover voting is a technique advocated by Roger Stone and other ratfuckers; they use such methods to insure that Republicans can choose the most vulnerable Democratic nominee.

John McCain. Garrison Keillor was right to institute a "no eulogies" policy on his radio show. If you allow one eulogy, you must then make room for the next, and the next -- and pretty soon the entire show becomes nothing but eulogies.

In the case of John McCain -- with whom I did not agree on many important issues -- I think the following tweet from Tim Miller says all that need be said:


John McCain was in that Hanoi hell for years when he was offered release, refused, and was beaten to near death again. He had no business surviving it. His subsequent public life was a miracle and a gift. And we have vanishingly few like him left. What a life.

This is the man about whom Trump said: “He’s not a war hero. He was a war hero because he was captured. I like people who weren’t captured.” Trump also said: "I think John McCain’s done very little for the veterans." Trump said those words about a celebrated veteran who received awards and endorsements from the VFW and the American Legion.

Those outrageous and offensive remarks should have ended Trump's political ambitions. Yet much of the country forgave him -- and in that moment of unforgivable forgiveness, sanity died.
posted: 4:47 AM