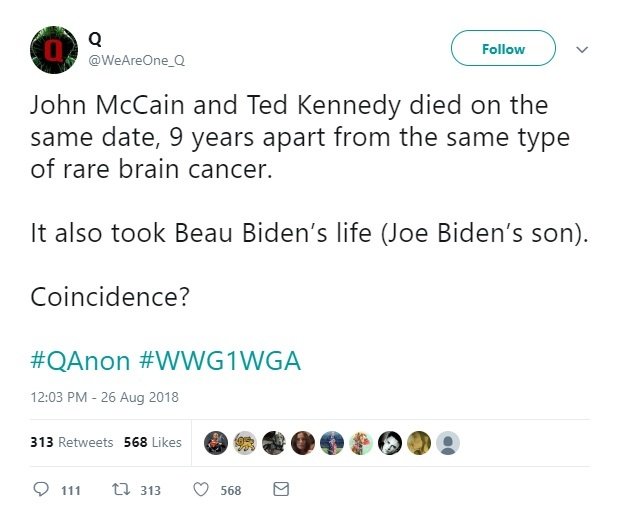 According to the latest dispatches from Q HQ, John McCain did not have cancer. He committed suicide to avoid a military tribunal.

And how do we know this? I will give Q himself a chance to explain; eyes right. This is the kind of irrefutable logic you learned about in geometry class.

The above link goes to a Wonkette article. You gotta read the comments; they're freakin' hilarious. Along the way, a reader mentions an even more surreal theory which recently popped up on Infowars. This Media Matters headline sums it all up:


Infowars host: Hurricane threatening Hawaii has been split in two by energy beam shot from Antarctica, possibly by John Kerry

Owen Shroyer: “Why is John Kerry going down to Antarctica just a week after the election to discuss climate change and then you have energy beams coming out of Antarctica splitting hurricanes?”

I have a number of questions. First: When, exactly, did an "energy beam" split a hurricane?

Second: How does an energy beam split a hurricane?

Third: If we have this sort of hurricane-splitter technology, then why were Puerto Rico and the Virgin Islands walloped?

Fourth: Wouldn't an energy beam travel in a straight line? Let's presume for the sake of argument that an energy beam could split a hurricane. Isn't this a job best carried out by a space-based platform? Isn't Antarctica pretty much the worst place in the world for such a device?

Fifth: How do you power a device like that in Antarctica? After reading this (and similar posts), I find it hard to believe that there's power enough in Antarctica to blast hurricanes half-a-world away.

Sixth: How do you build such a massive project unnoticed? To get to Antarctica, you have to go through Chile, and you have to ship materials across some incredibly dangerous seas. Wouldn't it be easier to build a thing like that in the Nevada desert?

Seventh: Why John Kerry? Why would a cabal of evil energy-beamers say: "You know what? We need to get John Kerry in on this! He needs to come down here and personally help us build this goddamned energy beam!

In order to resolve these mysteries, I spent a full 90 seconds immersed in serious research. During this investigation, I discovered Infowars consultant Professor Darrell Hamamoto, a savant employed by UC Davis:


Owen, that’s an amazing graphic. I think we’ve seen a number of the channels on YouTube that show us a different bizarre weather that’s been occurring across the world and in the United States that are listed in YouTube. But in watching that graphic, I’m remembering all of a sudden that didn’t John “Skull and Bones” Kerry, the former presidential candidate against George W. Bush, another Skull and Bonesman, didn’t he go -- he made a quick trip to Antarctica not too long ago, did he not?

Of course. Kerry got tapped; Kerry went to Antactica; therefore, hurricanes. The logic defies refutation. It's as if Socrates himself had taken a teaching position at UC Davis.

But...wait a minute. It is an established fact that Bruce Wayne is also a Bonesman. Can Batman stop hurricanes? Does he, like Superman, control a secret base in a frozen wasteland?


You know there might be a direct line that connects that facility down in Antarctica to the Kalorama neighborhood of Washington D.C., where the Obama Foundation is housed in a 8,400 square foot home that I believe is in part subsidized by the U.S. taxpayer. Kalorama, ladies and gentlemen. K-A-L-A-O-R-A-M-A (sic). The Obama foundation

I think these guys toss out names more or less at random. Conspiracy theory has become a game of Mad Libs.

The past is never past. In previous posts, I have touched on my own theory of Q. I suspect -- but cannot yet prove -- that Q is a group effort involving the crew from The Barnes Review, an anti-Semitic site founded by Willis Carto.

Although TBR's original mission goal was the promotion of Holocaust revisionism (Barnes was the name of an infamous revisionist), the site also carried out a series of hoaxes, the most elaborate of which was something called "The Voice of the White House." This alleged "insider" column  ran during the Dubya years, and it took in quite a few rubes on both the right and the left.

The "Voice" columns of yore and the Q messages of today bear a certain resemblance.

The hoaxer-in-chief at TBR was a chap who called himself Peter Stahl, although that was just one of the many names he has adopted during his remarkable career (which veered into the exotic world of art forgery). As "Gregory Douglas," Stahl wrote several bumcombe-filled books and was even featured in a full-length documentary broadcast on Russian TV.

After much research, I found out the man's real name, which I will soon publish. Although "Stalh" is now in his 80s, he seems quite sharp, and word has it that his son is a chip off the old block.

Stahl himself was the student of an outrageous fear-peddler named Eustace Mullins, formerly of the National Renaissance Party, the earliest post-war Nazi party in America. The pro-Russia tendency on the American far right began with the NRP during the 1950s. In 1957, Mullins created the "Israel Cohen hoax," which was designed to smear  the civil rights movement. The hoax is discussed in this Wikipedia article, although it received its fullest exposure in Morris Kaminski's superb book The Hoaxers.

Why am I bringing up this Memory of Bullshit Past? Because the past is never past. Henry Makow, another TBR alum and friend to Peter Stahl, is making a strenuous effort to resurrect the Israel Cohen fabrication: See here and here.

On the far right, old hoaxes never die out completely; they keep coming back, just like Dracula in those old Hammer horror films. Sixty years from now, your great-grandchildren will be told about the time Evil John Kerry zapped Hawaii from his secret base in Antarctica. And your great-grandchildren will believe it. Nothing else about John Kerry will be remembered; he'll go down as the great hurricane-zapper.

I am increasingly convinced that the TBR crew is responsible for Q madness. True, the people behind the Q do not devolve into out-and-out anti-Semitism -- but then again, neither did "The Voice of the White House." When operating in mixed company, neo-Nazis are usually clever enough not to wear their racism out in the open.

Q-ish logic. The following does not directly involve Q. However, the logic on display here is definitely Q-ish. 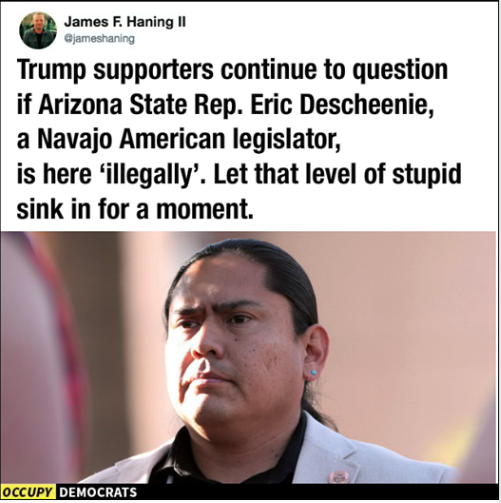