Added note: I have no particular reason to believe that the Manafort verdict will come down today, but the queasy feeling in my gut tells me to prepare for the worst.

As readers know, I predict a hung jury, due to jury tampering. In the unlikely chance that he is found guilty, he'll receive a pardon soon enough. His lawyers would have mounted a more serious defense if there were any serious chance that Manafort would do serious time.

Only state charges matter. These federal trials are jokes.

Antifa. Remember when I said, one or two posts down, that Antifa should disband? Time to say it again, in a louder voice. In Portland, Oregon, a left-wing anti-fascist protestor named Paul Welch waved an American flag, only to be severely beaten up by black-clad Antifa demonstrators.


Soon a group of black-clad anti-fascist protesters, also known as antifa, demanded he lose the flag, calling it a fascist symbol. Welch refused, and a tug-of-war ensued.

It ended with Welch taking a club to the back of the head, lying on the ground in a pool of his own blood.

Agents provocateurs? Perhaps. I doubt that we'll ever know. Bottom line, the lads and lasses in black have become de facto members of the Trump Re-Election Campaign. All they can hope to accomplish is to give Trump a rationalization for rounding up "dangerous" leftists like you and me.

Members of the Resistance should wrap themselves in the American flag. Literally, when doing so is permissible. At they same time, they should rhetorically wrap the Trumpers in the Russian flag. (Not the current one: The Russian imperial flag with the double eagle.) It's time for the Dems to sing "God Bless America" -- and when the BernieBros complain, sing louder.

Remember when Hillary was pilloried -- by both the right and left -- because her husband signed the Omnibus Crime Bill?

The latest Satanic pedophile: Bill Maher! Just when when it seems that the QAnon Qrazies can't get wackier, they will find a way to out-nutty the Planter's factory. 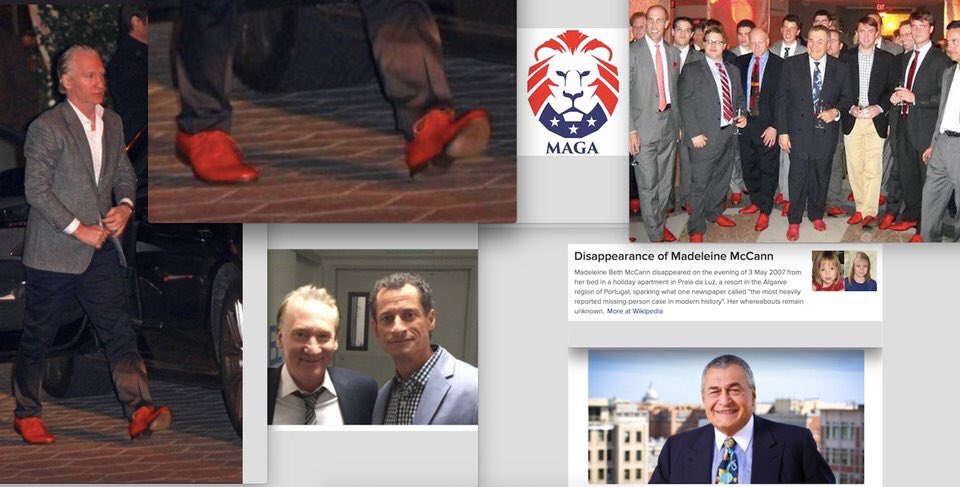 So QAnon people are going after Bill Maher now because he’s worn red shoes. They think red shoes are a sign you are a pizzagater and I guess they think the shoes are actually made out of dead children? Omg what’s happening

For more of this madness, go here.


It is an article of faith among the lower sort of conspiracy nuts that the Illuminati/Freemasons/Satanists/pedophiles/whomever always signal their true affiliations in subtle ways. The credulous dopes who swallow this stuff are like the children who look for hidden pictures in Highlights magazine: Did you find the duck in the tree? Oh my God! Highlights is run by SATANISTS!

For decades, a fruitcake named Jordan Maxwell has made a living by peddling this kind of nonsense. That name is probably unfamiliar to you, but I used to follow the fringe pretty closely; little is beneath my notice. Maxwell once had a substantial following among paranoia connoisseurs, and still has his fans. As I recall, his lectures were illustrated with slides of secret Illuminati symbols -- symbols scattered throughout our daily lives, which only he could properly interpret. For example, this device gave him the screaming meemies.

It's a fun game with one simple rule: If you're a rube and you see something unusual -- anything that stands outside the confines of your own tiny little life -- congratulations! You've stumbled onto a secret message from Them. Any oddity (for example, a pair of reddish shoes worn by a famous comic) is a signal from Illuminati Central. The bad guys constantly flash these symbols to identify their allegiance to Evil Inc. Why? Because that's the only way to run a covert conspiracy.

The game of spot-the-symbol will always be popular, because it gives dullards delusions of cleverness. There are millions of people out there who will always believe that Russiagate is a hoax, no matter how much evidence piles up. These same people spend hours decoding nonexistent secret messages embedded into the art at the Denver airport.

Right-wing freaks have been playing this game for well over a century.

Most of you have heard of the Protocols of the Elders of Zion, the most infamous hoax in history. The man who first published the Protocols in Russia was a mystic named Sergei Nilus. (Nilus did not create the hoax, but his name is forever associated with it.) A Russian count named du Chayla visited Nilus and subsequently wrote an important behind-the-scenes portrait of the man. At one point, Nilus grandly informed his interviewer that he could "prove" that what he called "the sign of the Antichrist" (the star of David) had suddenly become ubiquitous in Russian society:


Nilus arose and we all followed him into his study. He picked up his book and brought in from his own room a small chest which I later called the museum of the Antichrist. He began to read further in the text and the commentaries which he was preparing for the edition. He then passed on to the "evidence." He opened the chest and I saw amidst indescribable disorder a number of objects made of rubber, some household utensils, insignia of technical schools, even the cipher of the Queen Alexandra Fiodorovna and the cross of the Legion of Honor. On each of these objects his hallucination showed him the "seal of the Antichrist" in the guise of a triangle or a pair of crossed triangles. It was enough for any object to bear on it a figure resembling somewhat a triangle for his inflamed imagination to see in it the sign of the Antichrist and the seal of the Wise Men of Zion. All these observations entered into the edition of the Protocols, published in 1911.

With increasing restlessness under the influence of a sort of mystic terror Nilus explained to me that the sign of the "Son of Iniquity" has contaminated everything, and that it flourishes even amidst the designs and ornaments of churches and in the decorations of the holy ikons. It was midnight. The appearance, the voice, and the weird gestures of Nilus showed that his mind was on the brink of a precipice, and that his reason would at any moment dissolve into madness...

As then, so now. The Antichrist still uses symbols to announce his presence. Bill Maher wore reddish shoes? Obviously, he likes to rape infants! Any other conclusion would be naive.

Shortly after arrival of the 21st century, I read an article which revealed that the works of Nilus had become popular again in Russia. The virus was back. But who could have guessed that the disease would leap from Russia to this country? Our entire nation stands on the brink of a precipice, and our collective reason threatens to dissolve into madness.
posted: 3:22 AM