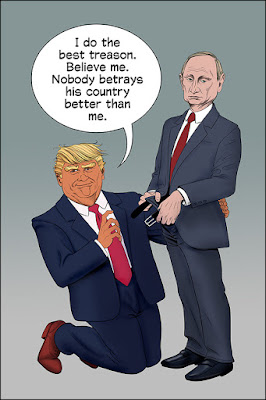 I'm disgusted by anyone who asks why Trump behaved the way he did today. The answer is obvious. Several tons of evidence, not to mention the principle of Occam's razor, forces us to conclude that Donald Trump is, and always has been, a witting traitor.

Many people scoffed when I suggested (on June 16, 2016 -- more than a month before the "Russia, if you're listening" speech) that Putin was pulling the strings. That wild conspiracy theory now looks like common sense.


Trump is right now, before our eyes and those of the world, committing an unbelievable and unforgivable crime against this country. It is his failure to defend.

Just so. By deliberately leaving the 2018 election open to manipulation, Donald Trump has committed an impeachable offense. If any Dem had done the same, said Dem would have been removed from office.


“Today’s press conference in Helsinki was one of the most disgraceful performances by an American president in memory. The damage inflicted by President Trump’s naiveté, egotism, false equivalence, and sympathy for autocrats is difficult to calculate. But it is clear that the summit in Helsinki was a tragic mistake.

I disagree with the final sentence: The word "mistake" implies good intentions. Trump is a witting traitor. From the Atlantic:


Either Donald Trump is flat-out an agent of Russian interests—maybe witting, maybe unwitting, from fear of blackmail, in hope of future deals, out of manly respect for Vladimir Putin, out of gratitude for Russia’s help during the election, out of pathetic inability to see beyond his 306 electoral votes. Whatever the exact mixture of motives might be, it doesn’t really matter.

Or he is so profoundly ignorant, insecure, and narcissistic that he did not realize that, at every step, he was advancing the line that Putin hoped he would advance, and the line that the American intelligence, defense, and law-enforcement agencies most dreaded.

Conscious tool. Useful idiot. Those are the choices, though both are possibly true, so that the main question is the proportions.


Option one. No other explanatory scenario fits the facts.

There's a rumor going around that Senate Republicans are in an emergency meeting right now, thanks to this obvious evidence of Trumpian treason. Although the sourcing is iffy, I wouldn't be surprised to learn that this claim is true.


Donald Trump’s press conference performance in Helsinki rises to & exceeds the threshold of “high crimes & misdemeanors.” It was nothing short of treasonous. Not only were Trump’s comments imbecilic, he is wholly in the pocket of Putin. Republican Patriots: Where are you???

Although I appreciate this tweet, I can't help but ask: Where were you, John Brennan?

At the very least, we can say that CA's servers were accessed from Russia -- probably with CA's full kowledge. From the Guardian:


There is even, the Observer has learned, an ongoing channel of communication between them. A source familiar with the FBI investigation revealed that the commissioner and her deputy spent last week with law enforcement agencies in the US including the FBI. And Denham’s deputy, James Dipple-Johnstone, confirmed to the Observer that “some of the systems linked to the investigation were accessed from IP addresses that resolve to Russia and other areas of the CIS [Commonwealth of Independent States]”.

It was a recent discovery, he said, but an explosive one, potential evidence of a direct link between the company at the heart of the Trump campaign – and files holding information of 220 million US voters – and the Russian government’s disinformation campaign.

Like it or not, there is a kernel of truth to Trump's desperate reminders that the dirty deeds of 2015-16 were done while Obama was in office.

See, for example, here. The "Wylie" in the following sentence refers to CA whistleblower Christopher Wylie...


Wylie has now come out as the whistleblower who exposed the dubious link between Kogan, Cambridge Analytica and the Trump campaign. Moreover, Wylie has exposed Cambridge Analytica CEO Alexander Nix as a supremely arrogant individual who once boasted of working with the Pentagon, CIA and MI6.


SCL boasts of providing “data, analytics and strategy to governments and military organizations worldwide,” notably the British Ministry of Defence, the US State Department and NATO.

(SCL is the parent company of CA.)


According to Liam O’Hare at Bella Caledonia, SCL went public in 2005 at the DSEI conference, a global arms fair in London, promoting itself as the first private company to provide psychological warfare services to the British military:

“Its ‘hard sell’ was a demonstration of how the UK government could use a sophisticated media campaign of mass deception to fool the British people into thinking an accident at a chemical plant had occurred and threatened central London.”

“In addition, SCL also carries a secret clearance as a ‘list X’ contractor for the MOD. A List X site is a commercial site on British soil that is approved to hold UK government information marked as ‘confidential’ and above. Essentially, SCL got the green light to hold British government secrets on its premises.”

Palantir has previously done work for the National Security Agency and is backed by the CIA's not-for-profit venture capital firm. Palantir's CEO Alex Karp, who is also not accused of wrongdoing, was also one of the technology executives who was at a meeting with Trump in December 2016.

The logos of the State Department and NATO used to appear on the SCL website -- and yes, like it or not, that was something that happened during the Obama years.

We haven't even begun to get into the copious evidence of Israeli intelligence aid to Trump -- aid usually extended via "private" intelligence groups, probably acting as plausibly-deniable Mossad cut-outs.

And lest we forget: Michael Flynn was the head of the freakin' DEFENSE INTELLIGENCE AGENCY. He seems to have gotten honeytrapped by a Russian woman at the Cambridge Intelligence Forum (which has itself become a very strange affair).

The bottom line. The election of Donald Trump is the result of a longstanding pro-fascist faction within western intelligence.

If the preceding sentence seems outrageous, you need to do some reading. Look up Operation Gladio. Study the CIA's installation of Pinochet in Chile. Find a biography of Reinhold Gehlen. Read Christopher Simpson's Blowback. I could go on (and on and on and on). When all is said and done, we may find that Trump's triumph -- which is really the triumph of fascist Russia -- derives from the events outlined in this excellent summary.

(Why'd you leave that stuff out of your recent book, Malcolm Nance? Instead of citing ultra-rightwing assholes like John Barron and Pete Bagley, why didn't you give us the real history of the Cold War?)

When did it start? The question is not "Was Trump recruited?" but "When was he recruited?" There is an interesting argument that he got onto the Russian radar when he married Ivana. Luke Harding goes into this theory in his book Collusion, as well as in this Politico article.


It is not difficult to imagine that Russia quickly had something on Trump, from either exploits during his 1987 visit or any subsequent embarrassing behavior KGB assets might have uncovered. But the other leverage Russia enjoyed over Trump for at least 15 years is indisputable — in fact, his family has admitted to it multiple times. After a series of financial reversals and his brazen abuse of bankruptcy laws, Trump found it impossible to borrow from American banks and grew heavily reliant on unconventional sources of capital. Russian cash proved his salvation. From 2003 to 2017, people from the former USSR made 86 all-cash purchases — a red flag of potential money laundering — of Trump properties, totaling $109 million. In 2010, the private-wealth division of Deutsche Bank also loaned him hundreds of millions of dollars during the same period it was laundering billions in Russian money. “Russians make up a pretty disproportionate cross-section of a lot of our assets,” said Donald Jr. in 2008. “We don’t rely on American banks. We have all the funding we need out of Russia,” boasted Eric Trump in 2014.

It's one or the other folks; I see no third choice. Whichever road you take, you're on the path of paranoia. That is the nature of the current situation.

The Nazis came to power by promoting false conspiracy theories, yet they were also the foremost practitioners of actual, provable, real-world conspiracies. The transcripts of the Nuremberg inquests are titled Nazi Conspiracy and Aggression.

As then, so today.

This just in: We have a new Mueller arrest! I haven't had the time to process this, but...


Russian National Charged in Conspiracy to Act as an Agent of the Russian Federation Within the United States - Mariia Butina, 29, a Russian citizen residing in Washington D.C., was arrested on July 15, 2018, in Washington, D.C.

Here is the Complaint. She apparently has close ties to the NRA.


She's was the go-between for Putin and the NRA, too. Touches a lot of figures in the Trump orbit like Sheriff Clarke, etc.

Her name is usually spelled Maria. Here is her Wikipedia bio.


At one time, she worked for Aleksandr Torshin, a former Russian senator belonging to Vladimir Putin’s political party and deputy governor of the Central Bank of Russia, with alleged ties to the Russian mafia. In recent years, Butina has developed extensive ties to conservative American political circles. As of 2018 Butina, Torshin, and Paul Erickson, an American political operative, are under investigation in the United States for their potential involvement in Russian interference in the 2016 United States elections; Torshin has also been the subject of a probe by the Federal Bureau of Investigations into whether the Russian government attempted to illegally funnel money to the NRA in order to help Donald Trump win the presidency.[3] On July 15th, 2018, Butina was arrested in Washington, DC and charged with conspiring to act as an unregistered agent of the Russian Federation.

The Daily Beast wrote a longish piece about her back in February.
posted: 3:31 PM