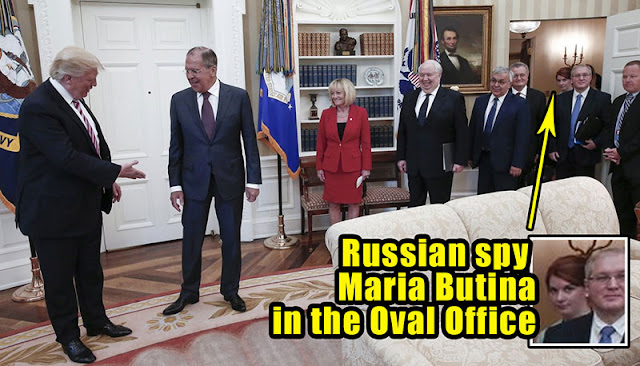 There's talk of Manafort flipping. As you know, I've become allergic to all of this loose "flip" talk -- remember when everyone assured you that Steve Bannon would flip? -- but in this case, we have some indicators that an actual change is a-coming.

First, there was a delay in Manfort's trial in Virginia, just before the beginning of jury selection. This, in the "rocket docket" court where delays are rarely tolerated.


According to the publicly-accessible court docket, no party had submitted a request for such a delay and there was also no indication of an official court notice being filed as of late Monday afternoon.

A last-minute deal? That theory would explain things nicely. Manafort must be unhappy with his new cell.

More to the point, Trump's behavior in Helsinki -- he practically wore a baseball cap with the word "TRAITOR" sewn on -- reportedly led to a secret meeting of Republican senators. I still have not seen confirmation of that report, but if such a meeting did in fact take place, those in attendance might have concluded that they've had quite enough of Dirty Donnie. There were even a few anti-Trump grumblings on freakin' Fox. Yes, it's true: Mr. T got dissed on his favorite show, Fox and Friends.

If Trump loses support in Congress and on Fox, he won't be in a position to hand out pardons. Even if he holds onto the presidency, pardoning a co-conspirator requires a great deal of political capital -- and he lost a lot of capital yesterday.

Of course, Manafort must also weigh the threat of assassination. A man in jail is in a particularly vulnerable position. And Vlad does like to hand out polonium "treats" to those he considers treasonous to his cause.

Dark money. This is ominous...


The U.S. Treasury said on Monday that it will no longer require certain tax-exempt organizations including politically active nonprofit groups, such as the National Rifle Association and Planned Parenthood, to identify their financial donors to U.S. tax authorities.

Yesterday, we learned of Maria Butina's links to the NRA -- and to Putin. Under Trump, Putin and the 'garchs can funnel billions to conservative causes via the NRA and cognate organizations.

Why does Bernie love Russia? Bill Maher infuriated me when, in his latest comedy special, he called Bernie Sanders "authentic." Really? How authentic was it for Sanders to tell Hillary "Nobody cares about your damned emails" -- only to harp on that very issue incessantly later in the campaign, even when it became crystal clear that Hillary was the certain nominee? Would an "authentic" candidate have hired the vile Tad Devine, Paul Manafort's partner?

How authentic is it to create a fanatical cult of personality every bit as obnoxious and brownshirt-esque as the Trump cult? Why didn't this "authentic" politician decry the obvious rightist ratfuckers in his cult -- people like Lord H.A. H.A. and Cassandra Fairbanks? Would an "authentic" politician say nothing about the documented aid he received from Russian sources? Isn't there something inauthentic -- something downright Trumpian -- about Bernie's refusal to disclose his taxes?

I could go on and on. I have gone on and on, in previous posts. Right now, I'd like to draw your attention to this exchange between Asha Rangappa and Virginia Heffernin. Rangappa:


Remember that @RandPaul was one of only two senators who voted against the Russia sanctions bill, along with @SenSanders


.@SenSanders voted against Russia sanctions? Sanders Sanders I know that name...oh yes from Mueller's February IRA indictments...Wasn't he named by Mueller as having been helped by the Kremlin in 2016? Didn't he have Manafort-linked Tad Devine as campaign manager? Weird day.

Sanders was also one of a bare handful of Congress-critters to vote against the Magnitsky sanctions. And he didn't even have a bullshit rationale in this case.

There's no point in asking "What have they got on Sanders?" since it has already been established that the Republicans have plenty, including video of Sanders enthusiastically participating in anti-American rallies on foreign soil.

Why are the Trumpers defending Putin's absurd lie?
Putin told the world that his enemy Bill Browder -- the man who promoted the Magnitsky sanctions -- donated a whopping $400 million to the Hillary Clinton campaign. Somehow, this happened without coming to the attention of the SEC or even the Republican party, not to mention the zillions of reporters looking for every speck of dirt they could find in Hillary's resume.


We tried to fact-check PUTIN's claim that @BillBrowder's associates donated $400M in un-taxed Russian $ to @HillaryClinton's campaign, but it was so completely without evidence that there were no pants to light on fire, so I hereby deem it "WITHOUT PANTS."

The responses tell us much about what has happened to the American right (presuming that these people are Americans).


As a former Int'l Banking Officer, I respectfully call BS on you, Sir. No one, not even the CEO of my former employer, could investigate a claim of that magnitude in the time frame you're claiming to have done so & w/out the proper security clearances. A Special Counsel's needed.

A Special Counsel? To investigate an outlandish, evidence-free claim made by a dictator?


He didn't investigate jack shit. He's just another typical lazy journalist, probably late for a wine-tasting or an art show. They don't give a damn about actual "journalism." The truth is out there, but you won't find it in the main-stream media...just sayin'.

And so on. Even a noted liar like Vladimir Putin can say anything he likes about Hillary Clinton -- however ridiculous, however unproven -- and the American right will swallow it. 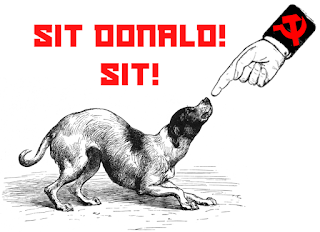 Sit! A reader sent in this graphic, along with the following words of explanation...


Did you notice when Trump and Putin went into that pre-meeting press conference, Trump stood there looking dazed and confused until Putin said one word, moved his foot, and Trump sat right down? It occurred to me the word was "sit". I've been tweeting this all day. It's time to take to the streets.

Indeed it is. There was an impromptu gathering at the White House yesterday. I propose something more organized.

Cambridge Analytica. Reader B (who lives in the UK) offered a follow-up to the yesterday's post...


Regarding Cambridge Analytica and the British end of the successful project to install Trumpski in the White House, note that the story about Dominic Cummings having to give evidence to a House of Commons Select Committee was suddenly stopped last month. Since then there have been some reports mentioning Cummings in relation to the Vote Leave campaign (which is looking increasingly criminal), but few on his involvement in any other legal matters, such as the Mueller investigation.

He has not posted to his blog for around a month.

Cummings (called a "psychopath" by David Cameron) to me looks like FSB all the way through.

It would not surprise me if he and Alexander Dugin are acquainted. The "free school" lobbying on his CV suggests a Steinerite connection too.

Both Michael Gove (for whom Cummings used to work) and Boris Johnson also look "nash".