Did Omarosa make tapes? So far, there is no indication that she did -- but I certainly hope so, because she is about to receive the kind of slamming normally reserved for anyone named Clinton. Her new tell-all book is called Unhinged: An Insider's Account of the Trump White House. A promising title, that.

The work is described as a "stunning tell-all and takedown from a strong, intelligent woman who took every name and number..." I hope she was intelligent enough to press the record button.

Undoubtedly, the bots of St. Petersburg will soon fill this Amazon page with negative reviews.

Before you get too excited, consider this: Donald Trump must have made her sign an NDA. This is Trump we're talking about; if he got a cat, he'd make the cat sign an NDA. (And yet the press called Hillary secretive!) How can Omarosa truly tell all while remaining constrained by such an agreement? Have her lawyers found a work-around? Has she decided that the legal penalties will be offset by the (no doubt quite hefty) advance she received from her publisher?

It has been widely rumored that Trump, while filming The Apprentice, freely used a certain epithet beginning with the letter N. Perhaps Omarosa will give us her response to this rumor.

What's all this about pregnancy? From Avenatti's twitter feed:


Breaking: Donald Trump conspired with Michael Cohen to pay off multiple other women prior to Election Day in 2016. They were also concerned about a pregnancy. Cohen has evidence and info in his possession and it must be released to the public. Now! #Basta


And for the haters out there, check my track record. I don’t make claims that are nonsense.

Even if you detest Avenatti, you can't dispute the fact that many scoffed when he made his original claim that Cohen had multiple tapes. Nobody scoffs now. Yesterday, the WP reported that Cohen made as many as a hundred tapes.

The obvious suggestion here is that the "pregnancy" is Shera Bechard's, who -- we have been told -- aborted a child fathered by RNC bigwig Elliott Broidy, not Donald Trump.

(Trump is a notorious womanizer famed for his phobic reaction to condoms. You'd think that so active a player would have had more than one "accident.") 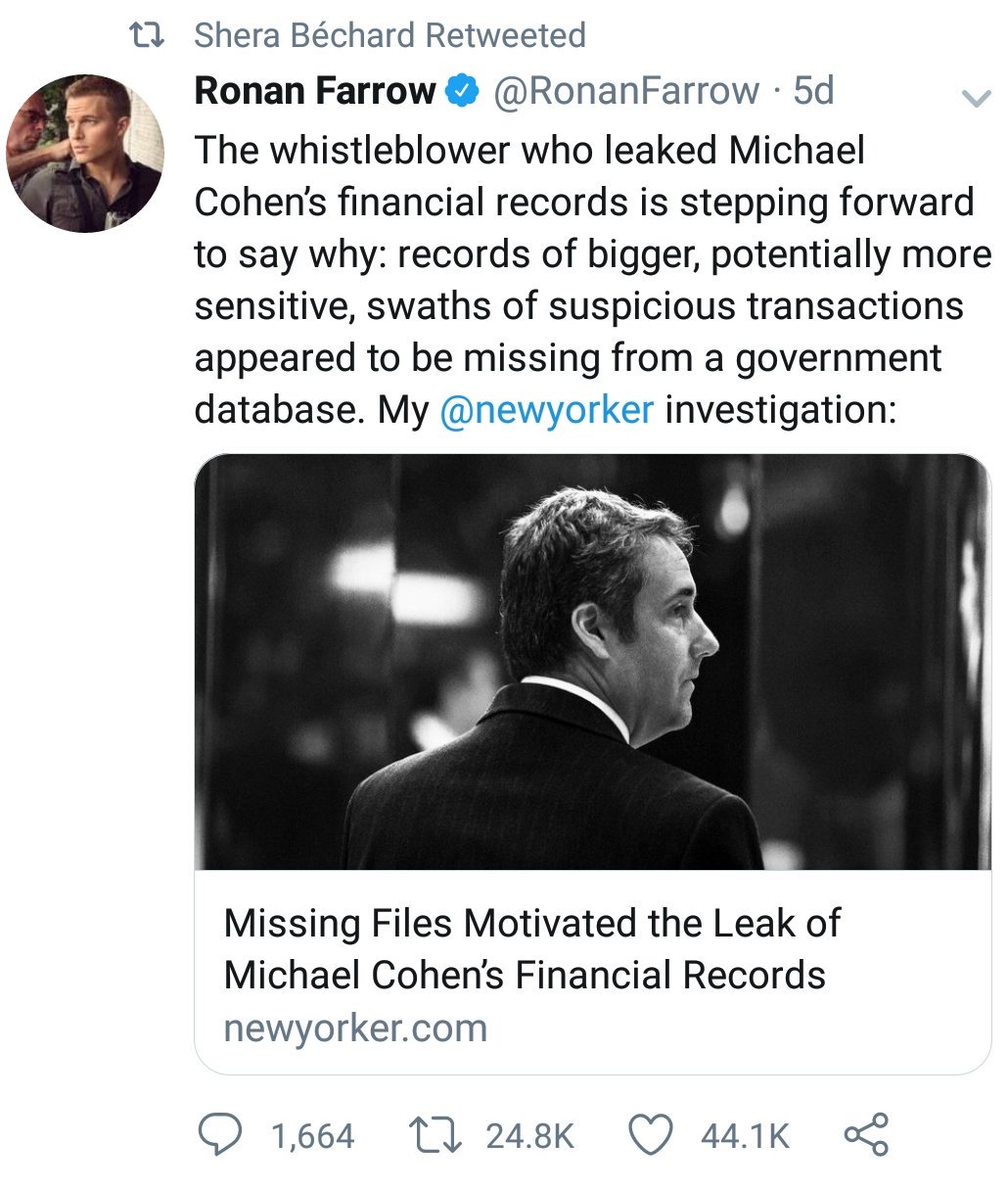 Although this blog has paid a fair amount of attention to Bechard's tweets, I may not have mentioned this matter. In the latter part of May, Shera retweeted a message from Ronan Farrow reproduced stage right. The question is: Why? If you follow Bechard's feed, you'll come away with the impression that this woman is not a political animal.

Yet she continues to retweet messages about narcissism. Millions of people consider Trump to be a classic narcissist; I don't know of anyone who has applied that word to Elliott Broidy.

Many have asked Bechard if these tweets about narcissism refer to Trump. Even though nothing in any NDA prevents her from answering in the negative, Bechard has kept those lovely lips shut.

I'm not saying that the "Daddy Donnie" scenario is proven. But this sure as hell isn't just another wacky conspiracy theory.

All of that said: Avenatti recently went back to "talking trash" about Michael Cohen on national teevee. Not a wise move, in my opinion: The idea right now is to cajole Cohen into flipping, and insults aren't the way to accomplish that goal. I predict that Cohen will not flip; if he were of a mind to do so, he'd have done it already. But I'd love to be proven wrong.

Chris Cuomo. Apparently, there's a tape of Cohen speaking to CNN reporter Chris Cuomo in which he (Cohen) claims "I did it on my own," vis-a-vis the shell company set up to pay Trump's women. At an earlier stage, that statement might have helped Trump. However, the recently-released Trump/Cohen recording clearly establishes Trump's cognizance and approval of the arrangement.

Precedent. On last night's Lawrence O'Donnell broadcast, there was some discussion as to why Cohen would make these tapes. The general agreement was that Cohen needed evidence in case he were ever used as the proverbial "fall guy."

Cohen made a wise decision. Let's look at a historical precedent.

Nearly one hundred years ago, Teapot Dome -- the grandfather of all modern American political scandals -- hit the Harding administration. Government-owned lands were leased without competitive bidding to private oil companies. Certain powerful oil men greased the way with a massive no-interest "loan" to Interior Secretary Albert Fall. In a word: Bribery. The most important of these oil men was Edward Doheny, the tycoon who partially inspired Daniel Day Lewis' character in There Will Be Blood.

Although American history textbooks always mention the Teapot Dome scandal, they usually leave out the murder mystery that cropped up toward the finale. Yet that's the most interesting part.

The murder took place in Greystone Mansion (in Beverly Hills, California), where the final scene of There Will Be Blood was filmed. (Many other movies have been filmed on this estate. During my college days, when the American Film Institute owned the property, I hung out there a lot.) Greystone Mansion was a lavish, sprawling estate which old man Doheny built for his son Ned.

On February 16, 1929, Ned Doheny was found dead in the house. His wasn't the only corpse: The body of Hugh Plunkett, Ned's aide and all-around "fixer," was found nearby. A longstanding rumor holds that Ned and Hugh were lovers; I've seen no evidence to back this rumor, although subtle allusions to it flavored contemporary news accounts.

Ned's wife testified that Hugh -- who lived elsewhere -- drove to the Mansion, argued with Ned Doheny, shot Ned, and then killed himself. (Yes, I am guilty of over-simplifying a complicated series of events. This is a blog post, not a book; there are times when one must sacrifice precision for concision.)

Why did Plunkett do it? Varying theories have been sounded over the years. The bottom line -- at least my bottom line -- is that the Dohenys had planned to use Plunkett as the "fall guy" in Teapot Dome.

The case haunted the headlines for nine long years, 1921-1930. In 1929, Albert Fall was convicted of taking a bribe from Edward Doheny -- yet Edward Doheny was acquitted of paying bribes in 1930. He avoided conviction by making sure that Plunkett's fingerprints were on any piece of paper connected to this dirty business. When Plunkett belatedly understood what was about to hit him, he grabbed his gun and paid a visit to Greystone Mansion.

I'm quite certain that Plunkett would have lived longer if, instead of a gun, he possessed a modern voice recorder -- the kind that is easy to conceal. Surreptitious recording is a seedy business, but it's better to have audio evidence than a repeat of the great Greystone mystery.

The AJ video accusing Mueller of pedophilia has been removed. I hope that, when Mueller's probe is over, he sues AJ for that vicious libel. InfoWars, Breitbart and the National Enquirer continue to poison the minds of millions because libeled parties refuse to bring legal action.
posted: 1:35 PM