Not many hours ago, Michael Avenatti tweeted an interesting message:

This researcher insists that Demeter is connected to the Koch empire:


"According to a Center for Media and Democracy report, Demeter Analytic Services looks to be the funding arm of the Koch's data analysis operation."

Hm. Is that the same Demeter? I have my doubts.


Mark Ko, the head of a company called Demeter Direct, told CNN on Friday that he served as a middle person between Trump aide Michael Cohen and Korea Aerospace Industries.

"With regards to your inquiry on my involvement with Michael Cohen, I was brought in as business consultant and translator between Michael Cohen and Korea Aerospace Industries," Ko told CNN in an email. "The relationship officially ended on November 2017."

It was reported this week that Korea Aerospace Industries paid Cohen $150,000 in consulting fees.

Public filings for Demeter Direct in California list Ko as the company's CEO and say the company deals with Korean food.


Wait. They were translators? This doesn't make sense. Look, I know something about the translation business: If you want translation and/or interpretation (two related but separate specialties), you hire the services of a professional who works for an agency. You don't hire a purveyor of food.

So what's going on here? Are we dealing with a bunch of kimchi sellers? Or does Demeter sell something else entirely?

According to this source, the Demeter website was wiped clean -- very suddenly. But a cached version tells the story of a company with more on its plate than kalbi.


“Demeter Direct Inc. is a privately held, U.S.-based corporation headquartered in Los Angeles, California and a network of consulting partners in over 15 countries across the globe. Demeter will be your gateway and bridge to doing business in international markets.”

They also promote themselves as an “international team of professionals [with] over 55 years of collective knowledge and expertise that gives us a unique advantage in providing professional services to companies across a broad range of industries.”

Demeter Direct Inc. is a privately held, U.S.-based corporation headquartered in Los Angeles, California and a network of consulting partners in over 15 countries across the globe. Demeter will be your gateway and bridge to doing business in international markets.

At Demeter Direct, we employ hands-on strategic business development and innovative marketing solutions to help our clients meet their business objectives both domestically and abroad.

Our international team of professionals has over 55 years of collective knowledge and expertise that gives us a unique advantage in providing professional services to companies across a broad range of industries.


So this company deals in either Korean food or high-end international financial services. Or maybe both. Or maybe it started as one thing and then turned into another thing. Shit happens, right?

Actually, the cached version of the Demeter webpage looks pretty damned bogus to me. I see no named individuals, no resumes, no list of genuine accomplishments. In short and in sum: We have what appears to be a fake webpage for a fake business. (I've run into this sort of thing before.)

Provisionally, I would theorize that Cohen set up EC as a mechanism to facilitate payments that must not be connected directly to Trump himself. Those seeking favor from Trump make contributions to the fund; those monies are then used to make pay-offs to various companies or individuals who need to be kept at a certain remove. It's all about plausible deniability.

The pay-off to Stormy was kept under wraps for obvious reasons. But why was the pay-off to Demeter kept so hush-hush? Compensating a translator (or a caterer) is not the same as bribing an adult film star to keep her mouth shut.

This tweet shows what I presume to be the incorporation papers for Demeter, which has a listed address of 3500 W. 6th Street, Suite 223, in Los Angeles. That's the the address of a modern office building in Koreatown. Eight years ago, Demeter operated out of suite 412 at 3810 Wilshire in Los Angeles.

According to writer Sarah Smith, the previous head of Demeter was someone called Jung Lee, who may be the same person as Jung Soo Lee, manager of Nexon America. They are a South Korean software firm specializing in multiplayer online games, although they've established a major presence in the world of Bitcoin.

This archived page reveals that Demeter Direct was once a drop shipment firm located in Queensland, Australia. The same company? I don't know. 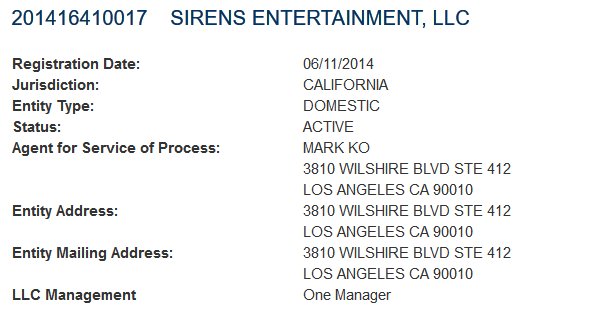 This investigator claims that Mark Ko (head of the L.A. Demeter) is connected with another firm with a very suggestive name: Sirens Entertainment. Please note the address: It's the same address as Demeter -- 3810 Wilshire.

"Sirens Entertainment" is -- to say the least -- a very suggestive name. Is Demeter a front for a sex-related business? Why would the president's bagman be paying money to such a concern? Why would the head of a company called "Sirens Entertainment" be brought in to provide translation services for meetings between Michael Cohen and Korean Aerospace?

Ko also runs a company called Flockrz, Inc. Same address. No website -- at least, none that I can find.

I might as well reprint in full a series of fascinating tweets from this writer...


22. Another company with same exact address (3810 Wilshire LVD STE 412) is PK2 Entertainment, LLC. No doubt it's same suite, so same people. This, though, was filed by Legalinc Corporate Services, Inc.

23. The CEO of Legalinc Corporate Services Is Erik Treutlein. From FRISCO, TX. But wait, THIS INC in turn was registered by URS agents INC, in DULUTH GA that was registered by Sundoc Filings. in Sacramento, CA. URS and Sundoc both have a man named Stanley Huser on the board.

24. This is where the chain ends, at this Stanley Huser guy in Sacramento. And Sundoc Filings is registered as a LEGAL services company.

25. For those who have missed the point, the same exact address and suite number applies to Demeter Direct Inc. and PK2 Entertainment LLC.

26. PK2 entertainment is the one that leads down the various other INCs to end at Stanley Huser in Sacramento. This all looks strange and shady, but the main point remains that of the KOREAN FOOD co. serving as "front" for Sirens Entertainment LLC.

27. Again at best Cohen was paying the Korean Food LLC to HIDE which Mark Ko company he was actually paying. Otherwise, this smells like money laundering. Done with the rabbit hole, for now. Will await news from Mr. Avenatti /END.

Just how big is suite 412 at 3810 Wilshire? A lot of companies have crammed themselves into the same digs...

Another contributor to this thread made yet another catch...

All we have on Anatica is this.

PK2 Entertainment, which has an impressive website, claims to be associated with Michael Jackson (who is still working, apparently), Lady Gaga, Beyonce and other huge names. It's hard to believe that this is the same company being run out of suite 412 at 3810 Wilshire. On the other hand, if PK2 really does work with the biggest names in show business, why doesn't the internet contain any other references to this company?

Please understand: This particular mystery is, at this writing, less than half a day old. I'm quite sure that some of these investigative trails will lead nowhere, and that we will hear reasonable explanations for at least a few of the conundrums we've mentioned. Nevertheless, this much seems clear: The president's lawyer, friend and bagman used a bogus company to make payments to a firm called Demeter, which appears to be a front for something called Sirens Entertainment.

That, my friends, is intriguing.

I suspect that we'll have many more clues to the Demeter/Sirens mystery before another day has passed. In the meantime, if you happen to need some good Korean barbecue and Korean translation services and international financial consultation and a really good online roleplaying game and an entertaining siren, you know who to call.
posted: 2:00 AM