The signs are clear: Rosenstein will soon go. He may well be gone by the time you read these words.

Benjamin Wittes sent out one of his "imminent BOOM" tweets. A reference to Rosenstein? Wittes usually specializes in good booms (from a Resistance POV).

Crooked Cohen: We still don't know what the raid was all about, but we know the bottom line: Michael Cohen is officially under criminal investigation. "The filing redacts what Cohen is under investigation for." Damn!

Mike, it's time you understood: Donald Trump's definition of loyalty is "Die for me." He doesn't give even half a shit about you or anyone else. He simply expects you to die for him.

Update: The court filing indicates that Cohen was doing "little to no legal work, and that zero emails were exchanged with President Trump." Apparently, he was doing illegal work. We never expected to see emails with Trump, since Trump does not use email. But what about text messages? At any rate, Cohen's communications with others are not protected by attorney-client privilege.

Update 2: The finding by the US Attorney's office raises a point that should have been apparent from the start: Trump told the world that he knew nothing about Cohen's payment to Stormy Daniels. Therefore, nothing that Cohen did vis-a-vis Stormy is protected by attorney-client privilege.

It's the Lester Holt interview all over again! Trump screwed himself by opening his yap. 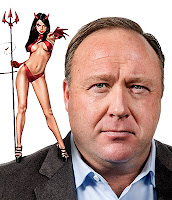 Need something to cheer you up? Try this. Alex Jones says that gorgeous, wealthy women continually seduced him when he was "13, 14" in order to convert him to Satanism. They targeted him because they were "interdimensionally" aware that he would one day start Infowars.

Update: We have the Inspector General's report on the (putative) reasons why Andrew McCabe was fired. And here is the statement from McCabe's attorney. I honestly believe McCabe to be the wronged party here.

It seems very likely that the Inspector General of the Justice Department -- Michael Horowitz -- has been compromised. I seem to be the only one who has repeatedly pointed out something that should be more widely discussed: As recently as last January, the Alt Right and Russian trolls waged all-out war against Horowitz. Even though he was little-known to the public at large, even though the average person never thinks about the DOJ's IG, the online brownshirts and made him the target of a vicious hate campaign.

Suddenly, suspiciously, the hate stopped. By the end of January, Horowitz had joined the campaign to demonize Hillary. The IG, formerly considered close kin to Comey, is now the Justice Department's answer to Devin Nunes -- and the Alt Righties no longer have a problem with Michael Horowitz.

Kompromat? Threats? Some other form of pressure? Hard to dismiss such ideas. That's how Trump and Putin do business. What does it profit a man to hide a Big Dark Secret at the expense of his soul?
posted: 2:35 PM